Joe Biden May Let Congress Have More of Trump's Jan. 6 Records. Here's Why That Matters

For over a century, U.S. Presidents have fought zealously to defend the executive branch’s right to withhold certain information from Congress and the public. President Joe Biden, facing extreme political pressure in the fraught probe of Donald Trump’s role in the Jan. 6 attack on the Capitol, may soon defy that norm.

As congressional investigators accelerate their inquiry and Trump begins to fight back in court, much of the investigation’s success hinges on the Biden White House and how much inside information it gives the select committee—a choice that could have political ramifications for Biden and affect the delicate balance of power for future Administrations.

So far, Biden has indicated a willingness to lean on the side of disclosure, citing the gravity of the Jan. 6 attack. His legal team encouraged the National Archives to turn over a first batch of Trump-era documents despite the former president’s assertion of executive privilege over sensitive information, such as conversations with staffers in the days leading up to the riot. And with the second batch of records currently under review by the Biden Administration, executive privilege will be determined on a “case-by-case basis,” according to White House Press Secretary Jen Psaki.

On Monday, Trump brought the issue to D.C. district court, filing a lawsuit against the Jan. 6 select committee and National Archives to block the release of his White House records related to the Capitol attack. It’s a high-stakes public legal dispute between a sitting president and his predecessor on the issue of asserting executive privilege; the suit accuses Biden of staging “a political ploy to accommodate his partisan allies.”

“The Committee’s request amounts to nothing less than a vexatious, illegal fishing expedition openly endorsed by Biden to unconstitutionally investigate President Trump and his administration,” the suit says.

Trump previously requested to assert privilege over 45 specific documents that included protected “presidential communications,” as well as deliberative process materials and attorney-client privileged materials. The suit accuses the select committee of harassing Trump and senior members of his Administration with “an illegal, unfounded, and overbroad records request to the Archivist of the United States.”

Any sitting president has an incentive to protect the power of the office and defend a Commander-in-Chief’s ability to have privileged communications with close aides. “Maybe an aide will choose not to give candid advice to the President because they saw that Biden released Trump’s records,” says Saikrishna Prakash, a law professor at the University of Virginia who studies presidential powers. “Politically, maybe some President in the future gets injured more quickly because something embarrassing comes out of a record release.”

In this case, since Trump is no longer in office, Biden may also want to protect the ability of a former president to keep White House documents private should he—or anyone who follows him into the Oval Office—ever be subpoenaed in the future.

But any move to deny certain requests for records on Trump’s activities would stymie the congressional investigation—a probe Biden supports. It could also alienate Democratic lawmakers who Biden needs to advance his agenda, as his infrastructure bill and social spending bill are currently held up by intra-party negotiations. The resulting dilemma—to comply with a probe into an assault on American democracy or preserve a core power of the presidency that he may need in the future—puts Biden in a complicated position.

Neil Eggleston, a Harvard Law lecturer who served as White House Counsel to President Barack Obama, says that “the facts are just so extreme that no dangerous precedent would be set” if Biden waives executive privilege over Trump’s documents. Based on his knowledge of the White House review process, Eggleston thinks it is unlikely that Biden will withhold any information that could help uncover how the mob was able to infiltrate the Capitol and disrupt the certification of Biden’s presidential victory, given the “compelling need” for answers.

Prakash concurs: “It’s not much of a dilemma for [Biden] when you think about the politics of it.”

Biden needs support from Democratic members of Congress in order to accomplish his major policy goals, including passing the historic spending bill that has stalled in the House for months. Helping the Jan. 6 commission, established by House Democrats, could potentially be a useful political strategy, experts say. Plus, if he complies and the findings are concerning, it could spoil the chances of another Trump presidency, Prakash argues, leaving Biden with plenty of political incentive to waive executive privilege.

The Jan. 6 commission has requested thousands of documents from the Trump Administration, many of which went to the National Archives where the president’s correspondence is held. Under an executive order on presidential records, the archivist “shall abide by any instructions given to him by the incumbent President or his designee unless otherwise directed by a final court order.” Rep. Bennie Thompson (D-Miss.), chairman of the House select committee, said on CNN Thursday that “a lot of what we decide” with regard to Trump will depend on how much information the Biden White House provides to the committee.

In a recent letter to the archivist concerning the first batch of documents under review, White House counsel Dana Rembus concluded that invoking executive privilege in that case was “not in the best interests of the United States.”

“Congress is examining an assault on our Constitution and democratic institutions provoked and fanned by those sworn to protect them,” the letter said. “The constitutional protections of executive privilege should not be used to shield, from Congress or from the public, information that reflects a clear and apparent effort to subvert the Constitution itself.”

There is precedent for a former president’s executive privilege claim being denied. Ronald Reagan declined to assert executive privilege to shield any Iran-Contra records from going to Congress, and Richard Nixon was ordered to disclose tapes after being indicted in the Watergate scandal. Biden’s ability to waive Trump’s invocation of executive privilege can come from a close interpretation of the doctrine itself, according to Ian Bassin, who served as Associate White House Counsel in the Obama Administration: executive privilege is only applicable in cases where the president is performing a function of his office granted to him by the Constitution in a manner “consistent with his oath of office.”

“Attempting to overturn an election is not one of those,” Bassin says. “Since Trump was acting outside the legitimate scope of his powers, he has no privileges to protect.” 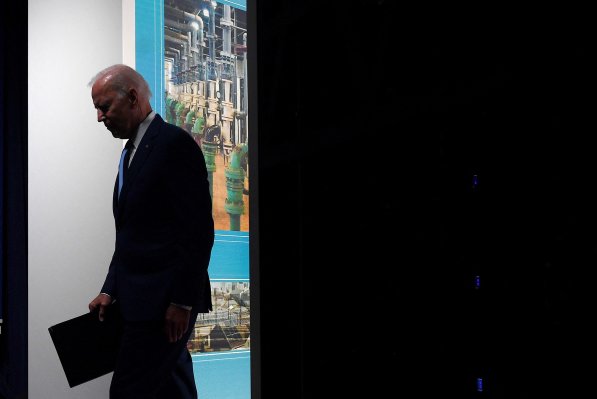 Biden's Refusal to Back Trump's Executive Privilege Claim Is the Right Call
Next Up: Editor's Pick