Microsoft logo is seen on the office building in Warsaw, Poland on July 29, 2021.
Jakub Porzycki—NurPhoto/Getty Images
By Dina Bass / Bloomberg

Microsoft Corp., which has faced pressure from employees and shareholders over contracts with governments and law enforcement agencies, agreed to commission an independent human rights review of some of those deals.

The move came in response to a June filing of a shareholder proposal asking the company to evaluate how well it sticks to its human rights statement and related policies. Microsoft committed to a review of any human rights impacts that its products have on those including communities of Black, Indigenous and People of Color in contracts for police, immigration enforcement and unspecified other government agencies, according to correspondence from the company viewed by Bloomberg.

Microsoft pledged to publish the report next year, and the shareholders, who include faith-based investors like Religious of the Sacred Heart of Mary, have withdrawn their proposal ahead of Microsoft’s annual shareholder meeting next month.

“In response to shareholder requests, Microsoft Corp. will commission an independent, third-party assessment to identify, understand, assess, and address actual or potential adverse human rights impacts of the company’s products and services and business relationships with regard to law enforcement, immigration enforcement, and other government contracts. The assessment will include consultation with BIPOC communities, including immigrants, and other groups representing communities most impacted by Microsoft’s surveillance products, law enforcement and government contracts,” the company said in a statement.

As government, military and police contracts have become targets of scrutiny and activism, Microsoft employees have circulated letters demanding the company abandon a deal to build versions of its HoloLens augmented reality headsets for the U.S. Army as well as raising concerns about business with U.S. Immigration and Customs Enforcement. Chief Executive Officer Satya Nadella has stood behind software sales to the U.S. military, but paused selling facial recognition technology to police departments, although the company sells other programs to law enforcement. The California-based religious order agreed to lead the shareholder proposal because it wanted to make sure the company’s products don’t “cause human rights harms, including perpetuating systemic racial inequities,” Sister Joanne Safian, said in a statement.

Microsoft told the investors the review will be conducted by the law firm Foley Hoag LLP. The proposal was filed by Investor Advocates for Social Justice, a nonprofit representing faith-based institutional investors. Microsoft didn’t specify which contracts will be examined, but shareholders “expect” it will include what the group said are about 16 active contracts with ICE and U.S. Customs and Border Protection.

“This will be an ambitious and complicated process and we’re certainly putting our faith in Microsoft and Foley Hoag to be conscientious,” said Michael Connor, executive director of Open MIC, a nonprofit shareholder advocacy organization that worked with IASJ on the proposal. “They’re asking for input from affected rights holders, which was a very big request on our part and they agreed to that.”

Human rights concerns have been raised by shareholders in areas related to labor and in the apparel industry around manufacturing conditions but are newer to the technology companies, he said. Open MIC has also made similar requestsof Amazon.com Inc., related to its facial recognition technology, as well as Apple Inc., Facebook Inc. and Alphabet Inc., without a positive response from the companies or a win at shareholder meetings, Connor said.

Open MIC is also working on two other shareholder resolutions related to Microsoft, including one that asks the company to stop selling facial recognition software to all government agencies.

“Tech companies take the position that all tech is good, and while we as shareholders recognize that tech can be helpful, there are also many downsides,” Connor said.

Microsoft earlier this month agreed to let more repair shops fix its devices in response to a push from As You Sow, a nonprofit shareholder activism group, and consumer advocates. 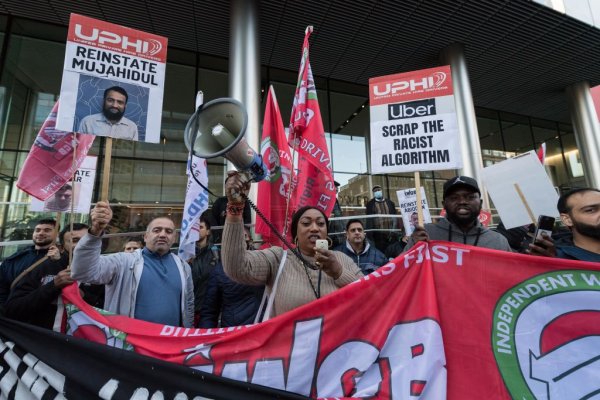 Uber Drivers Say a 'Racist' Algorithm Is Putting Them Out of Work
Next Up: Editor's Pick