'We’re At Its Mercy.' Small Businesses That Rely on Facebook and Instagram Question Their Loyalty After Global Outage

Audrey Leighton Rogers was relieved that she launched her fall collection last week, and not on Monday. Rogers, a Barcelona-based clothing designer and vintage curator, gets 95% of the traffic to her site from Instagram. These days, her income is, she says, 100% dependent on the audience she has built over a decade on the app. And on Monday, when Instagram, Facebook and WhatsApp experienced a global outage lasting nearly six hours, that audience disappeared.

“That really puts you in a vulnerable position when you realize you’re so reliant on one social media,” she said the next night over the phone. “I was like, Wow, if this had happened like a week before, this really could have messed up a whole month of work. That’s scary.”

Instagram and Facebook are home to countless small businesses, whose owners, like Rogers, depend on it for their income. The Monday outage could have been catastrophic for any of them, not just because of the loss of traffic, but because they don’t have access to their customers outside of the apps. Now, they’re faced with the knowledge that something as esoteric as a router configuration update—entirely out of their control—can derail their livelihoods. Perhaps even more alarming: None of the entrepreneurs or accounts contacted by TIME, ranging in size from several hundred thousand to several million followers, received any kind of direct communication from Instagram or Facebook to explain the situation, share updates, or assuage concerns.

As the outage concluded, a Facebook company spokesperson did share a statement in response to TIME’s request for further information: “To everyone who was affected by the outages on our platforms today: we’re sorry. We know billions of people and businesses around the world depend on our products and services to stay connected. We appreciate your patience as we come back online,” it read.

Michele Romanow, an investor and Instagram influencer, co-founded a company, Clearco, whose primary goal is to support ecommerce brands; they’ve invested $2.5 billion in 5,500 companies so far. “It’s a pretty big deal when social media goes down,” she says. “We had the launch of our fifth geography [Monday], which was Australia, and had all of this content planned to go out. And it’s like, Holy smokes! We definitely felt the pain of that.” Even their internal communication was stymied; Romanow’s employees often share voice notes via WhatsApp to get work done. “I think the perception is still largely that social media is just fun and distracting. But the reality is, there are billions of dollars of businesses that are running on these platforms,” says Romanow. The impact of not being able to sell or advertise for one day is considerable.

Looking forward, the guidance they’re giving their many companies: diversify wherever you can. “You wouldn’t want to be dependent on just one supplier for your inventory, right?” Romanow says. “In the same way, you don’t want founders that are relying on a single source to get their customers.” While in the past that argument was most tied to unpredictable algorithm changes, now the fundamental technology is also a reason to expand access points.

But not all businesses are positioned to look beyond Instagram for their customers. Deuxmoi, an anonymous celebrity gossip Instagram account that now boasts over 1 million followers, doesn’t have the bandwidth to expand to TikTok; she’s doing this alone. Plus the tap-tap format of Instagram Stories just works best for her reporting, turning an endless stream of gossip into digestible tidbits. Deuxmoi has a day job and her account is more of a side hustle than anything, but she spends an average of over six hours each day on Instagram and the outage shook her, even if it didn’t impact her bottom line. “The hours went on, and it was really frustrating. I had a live show that I needed to promote, and Instagram is my biggest audience,” she says. “And the algorithm has been messing with my engagement, so that on top of this, I was like, I gotta get off this app somehow.”

Entrepreneur Azora Zoe Paknad also knows the feeling of being stuck with Instagram, at least for now. Paknad started a direct-to-consumer sustainable products business, Goldune, during her pandemic quarantine. Her market research shows that her target audience exists primarily on Instagram, so it makes sense to invest her brand’s time there. “Instagram and Facebook are the two places where we have the deepest connection with our community and where we actually talk to them the most. Part of our platform is that we are able to not just sell you a compost bin, but also, you can DM us at any time [to learn how to use it],” she says. On Monday, “we lost those two biggest levers,” she says. Given global supply chain issues, they’re also in the midst of a pre-holiday push, making every day critical for their bottom line. “Maybe if we were a different kind of business or a different customer, we would have been able to pay to play in different ways or in different channels, but I think unfortunately we’re pretty beholden to those places where our community still lives,” she says. Still, the experience has rejiggered some priorities: they’ll be moving up their plans to find other ways to connect with potential customers, like launching a podcast.

Coming up with a backup plan now seems smarter than ever. “It’s always just been in the back of my mind that I don’t like having my platform posted on somebody else’s platform,” Deuxmoi says. “I’ve been thinking about this for a year.” Monday might’ve been her catalyst to finally take action.

Rogers, who has a newsletter that she admits she doesn’t update often enough, sounds lost. “We’re very vulnerable,” she says. It’s been a decade since she started her career—first as an Instagram influencer, now as an independent designer. She writes often in posts about how thrilled she is to be steadily gaining a following of customers who log on to snatch up her neutral-toned wrap dresses and vintage designer trench coats. But she knows she’ll never have total control over her own business—at this point it’s inextricably linked to a multi-billion dollar company. “We’re at its mercy,” she says, shrugging. 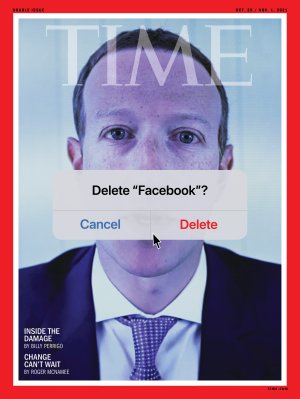 How Frances Haugen’s Team Forced a Facebook Reckoning
Next Up: Editor's Pick