Facebook’s stock price has been diving since the Wall Street Journal first published initial reports from whistleblower Frances Haugen on Sept. 13. As of Monday’s close, the company’s shares are down nearly 13%. And although Facebook’s valuation is still near an all-time peak since going public in 2012, it’s dipped below the $1 trillion mark that it breezed past for the first time earlier this year. As Haugen took the dais in Parliament on Monday, analysts disagreed whether her testimony and leaked documents could damage the tech giant.

“It’s a speedbump rather than a roadblock,” says Brent Thill, managing director at Jefferies Group. “They’ve had multiple speedbumps and they’ve gone through them. Three years back, Zuckerberg was in Congress about a regulatory issue and stock is up 100% since then.”

But other analysts think we’re just seeing the beginning of the pain for the company. “They can drive over it, the momentum of the business is pretty great,” says John Freeman, vice president of equity research at CFRA, of Thill’s speedbump analogy. “But you’re going to see the damage. There’s a real, real long term risk. It may have done internal damage that we won’t see for a while.”

Freeman admits that, so far, the shocking revelations about Facebook’s inner workings and callousness towards user wellbeing seem to have mostly rolled right off the company’s back—because advertisers are still spending money on the platform. “They haven’t even come close to tapping into the whole market of advertisers. They pull in a lot of small business advertising from companies that otherwise wouldn’t be able to advertise,” says Freeman. “Their revenue grew last year.”

This year, the company’s earnings are projected to rise 39% year-over-year by the end of December.

“If the advertisers don’t leave, no one’s going to care,” Thill says, “and when we talk to advertisers, they say, ‘We don’t care.'” That may be the case now, but Freeman argues that users will likely drop off the platform, or spend less time engaging on it, which will eventually discourage advertisers from coming back. “It’s a trickle-down effect,” Freeman predicts.

Facebook’s latest earnings call shows differently. The company said in the third quarter it had 3.58 billion monthly users across its family of apps—including Facebook, Instagram and WhatsApp—up from 3.51 billion in the second quarter. And earnings surpassed analyst’s expectations. “The population of the U.S. doesn’t seem to think this is especially important. Maybe they care, but they still use Facebook,” says Scott Kessler, a global sector lead of technology and media at Third Bridge.

And, as shown in Monday’s Facebook Papers releases, the company’s recent growth is mainly outside the U.S. “It’s largely driven by developing countries, and their advertising markets are growing,” Freeman says. “Americans could all quit Facebook and it’d still have a strong base.”

Kessler suspects the only thing that could really change the game for Facebook is federal regulation—and, despite the company’s frequent presence on Capitol Hill, that seems unlikely to happen. “Generally speaking, the antitrust cases against Alphabet/Google are stronger than the cases against Facebook,” says Kessler, “and I haven’t seen indications that there is a congressional will to prioritize and actually address these issues.” With midterm elections next year, he thinks it’s even less likely. Even with all the bad press “It’s not perceived as a legislative win to regulate Facebook,” he says. 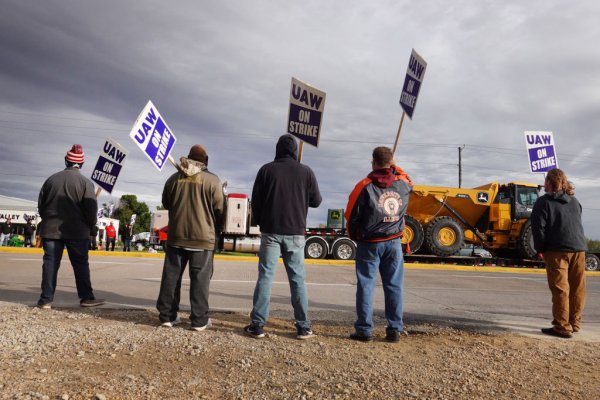 How Unions Are Struggling to Catch Up to Worker Anger
Next Up: Editor's Pick