Following a low-pressure alarm around 2:30 a.m. on Oct. 2 from its San Pedro Bay Pipeline, Amplify’s Beta Offshore unit didn’t shut the pipeline down until 6:01 a.m., the U.S. Department of Transportation’s Pipeline and Hazardous Materials Safety Administration said in a corrective action order Tuesday.

While all the details aren’t known, “the facts that are stated are very concerning to us,” said Bill Caram, executive director of Pipeline Safety Trust, a group that engages with pipeline operators. Operational reasons can cause a pipeline to lose pressure suddenly, but “we would have expected a pipeline to shut a line much faster than three hours” and also report it more quickly, he said.

The Golden State’s largest oil leak since a 1994 earthquake split open a pipeline spilled as much as 3,000 barrels along the California coast, according to Amplify’s estimates. The oil has drifted southward, forced the closure of popular surfing beaches and sullied wetlands.

Divers have found a 13-inch split in the pipeline that was “the likely source of the release of the oil,” said U.S. Coast Guard spokesperson Rebecca Ore at a briefing on Tuesday. About 4,000 feet of the pipeline was “laterally displaced by 105 feet.”

Amplify CEO Martyn Willsher said at the briefing that footage showed the pipeline was “pulled like a bowstring.” That type of dislocation is “not common,” he added.

He said his company didn’t confirm the leak until about 8 a.m. that morning, when an oil sheen on nearby waters was identified.

“Regardless of the cause, we’re going to do everything we can to make things right,” Willsher said.

After shutting the pipeline, Beta didn’t report the incident to the National Response Center for another three hours, according to the report. Initial estimates indicated that the pipeline released about 700 barrels, much less than the company’s number.

Beta Offshore was ordered to review and assess the effectiveness of its emergency response plan, including “the on-scene response and support, coordination, notification, and communication with emergency responders and public officials,” according to the document. PHMSA didn’t specify if the time taken to shut the line and notify the National Response Center was too slow or adequate.

An email and call to PHMSA regarding the appropriateness of the three hour wait wasn’t immediately returned.

The root cause of the accident remains unconfirmed but “preliminary reports indicate that the failure may have been caused by an anchor that hooked the pipeline, causing a partial tear,” according to the order. There’s no confirmation on a ship causing the leak.

–With assistance from Mike Jeffers. 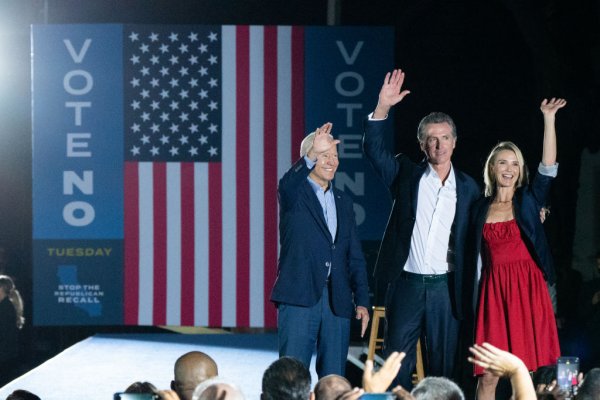 Biden Urges Californians to Vote No in Recall
Next Up: Editor's Pick