A China Evergrande Group sign atop the Evergrande Center in Shanghai, China, on Wednesday, Sept. 15, 2021. Chinese authorities have told major lenders to China Evergrande Group not to expect interest payments due next week on bank loans, according to people familiar with the matter, taking the cash-strapped developer a step closer to one of the nations biggest debt restructurings.
Qilai Shen–Bloomberg/Getty Images
By Russell Ward/Bloomberg

Trading of China Evergrande Group shares was suspended in Hong Kong along with those of its property management unit, as the property giant contends with a deepening cash crisis.

No reason was given for the halts, which also affect all structured products relating to the company, a stock exchange filing showed on Monday morning. Hopson Development Holdings Ltd. plans to acquire a 51% stake in Evergrande Property Services Group Ltd. for more than HK$40 billion ($5.1 billion), Cailian reported, citing unidentified people.

Evergrande shares have plunged 80% this year, and its bonds have tumbled to levels that suggest investors are bracing for a default. With more than $300 billion in liabilities, the developer has been trying to sell assets in a bid to raise cash. The saga has roiled financial markets in recent weeks on concern that it may spread to hurt the economy and financial system.

The trading suspension may be related to a major asset disposal or capital restructuring, said Patrick Wong, a Bloomberg Intelligence analyst. Weak property sales “may accelerate its asset disposal,” he said.

A representative for Hopson Development declined to comment in a text message.

Evergrande Property Services is the Chinese conglomerate’s most valuable business, with a market value of about HK$55 billion, surpassing the parent company’s HK$39 billion. Evergrande said in September that it had been “actively exploring” sales of parts of the unit, along with its electric vehicle arm, though no material progress had been made.

Evergrande’s 8.25% dollar bond due March 2022 was indicated 0.2 cent higher on the dollar at 25.4 cents, according to Bloomberg-compiled data. Mainland China markets are closed for a national holiday.

While Evergrande’s onshore bonds suffered regular halts last month, trading in the company’s Hong Kong shares had until now been continuous throughout its latest debt woes. Monday’s filing didn’t specify whether Evergrande requested the suspension, though it’s unlikely the stock exchange would mandate a halt without saying it had done so. Under Hong Kong listing rules, an issuer must demonstrate “exceptional circumstances” when requesting a trading halt and has to publish a public update as soon as possible.

Evergrande last requested a stock trading suspension in October 2016, according to data compiled by Bloomberg. Shares of its property unit were halted in January, when it announced it had purchased a rival firm.

The property services business went public in December, raising $1.84 billion in the sale. At the time, the offering valued the unit at about HK$95.1 billion, making it the second-largest listed property-management company in Hong Kong after Country Garden Services Holdings Co., according to Bloomberg calculations.

The stock has tumbled 43% this year, dragged down by Evergrande’s debt problems. Shares of the developer’s other Hong Kong-listed unit, China Evergrande New Energy Vehicle Group Ltd., haven’t been suspended. Its shares fell as much as 8.3% on Monday morning.

Chinese authorities have been trying to limit any fallout from the Evergrande debacle. Last week, officials met with banks to ease credit for homebuyers and support the property sector, and the government bought out Evergrande’s stake in a struggling lender.

Homebuyers are losing confidence in the embattled developer, which has pledged to deliver projects that have been left unfinished. Evergrande’s contracted sales probably plunged 86% in September from a month earlier, according to China Real Estate Information Corp. figures.

Evergrande has fallen behind on payments to banks, suppliers and holders of onshore investment products, and hasn’t given any indication that it paid two recent dollar bond coupons.

Now it faces a fresh debt test, with the maturity of a bond issued by a related entity. People familiar with the matter have said that a dollar note due Oct. 3 issued at an initial amount of $260 million by Jumbo Fortune Enterprises is guaranteed by Evergrande. As the maturity is a Sunday, the effective due date is Monday. 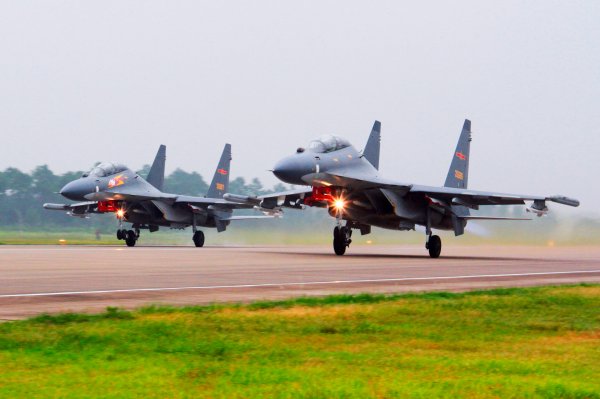 U.S. Concerned as China Flies Warplanes near Taiwan
Next Up: Editor's Pick