Gen. Stanley McChrystal Would Have Done Things Differently in Afghanistan

Stanley A. McChrystal’s only child, Sam, used to be in a punk rock band. Two, actually: The Welfare Babies and The Lucky Scars. They played the circuit a bit back in the early 2000s, when McChrystal was doing his own kind of tour, climbing the ranks to become leader of the U.S. military’s Joint Special Operations Command, which oversees the nation’s elite special forces teams. By 2009, just as The Lucky Scars were winding down, the older McChrystal was in charge of all operations in Afghanistan.

These days father and son have almost switched roles. Sam McChrystal now works in “the intelligence community,” as it’s referred to in Alexandria, Virginia where both men live, attempting to protect America from real, potential or perceived threats, including those from the country his father tried to tame. And it’s the former General’s turn to be the song-and-dance man. The elder McChrystal’s meticulously detailed Microsoft Outlook calendar—which includes timed entries for such tasks as showering and letter-writing—is filled with engagements to talk about leadership. His audiences run the gamut of the talented and driven to the merely ambitious: business executives, Yale University students, participants in his early morning running tours of D.C. landmarks, podcast listeners, and the C-suite team of a software company who hired him for some one-on-one troubleshooting.

In his new book Risk: A User’s Guide, released on Oct. 5 and co-authored by Anna Butrico, McChrystal breaks down how leaders can screw up a wide range of situations that pose threats to Americans. As a 34-year veteran of the armed forces, and the guy in charge of such high-risk missions as capturing Saddam Hussein and killing Abu Musab al-Zarqawi, McChrystal could easily lay claim to being an expert on dangerous situations and how to deal with them. But that’s not what this book is about. “Pretty early in the process of thinking it through and doing research, I came to the conclusion that the problem is not the problem,” McChrystal says over a late September lunch in his townhouse. “We’re the problem.”

Exhibit A for McChrystal is the United States’ handling of the pandemic. “It wasn’t new. It wasn’t a surprise; it was inevitable,” he says of the virus that has now claimed more than 700,000 Americans’ lives. His book details a series of training exercises, called Crimson Contagion, undertaken by then President Donald Trump’s Department of Health and Human Services in 2019, which had tested readiness for just such an occurrence and had highlighted where the weaknesses lay. “We have established responses to [public health crises] that have worked, and we know work. And then we got a scientific miracle; scientists pulled out a vaccine faster than the world deserved it to.” And yet, he adds, “We completely dropped the ball.”

As he goes through the list of the reasons the country with the world’s highest per capita spending on healthcare continues to lose so many people to an only mildly lethal infection, he checks off many of the talking points in his book: leadership “that was incapable of making the politically courageous decisions to do hard things early,” timing, inertia, bias, communication and the lack of a coherent narrative. “We didn’t fight COVID-19 as a United States of America, we fought it as 50 separate states,” he says. “And I would argue maybe more atomized than that.” The day before this conversation, he notes with remarkable precision—almost as if he had looked it up beforehand—2363 Americans died of COVID-related causes, which is “only 100 less than died in 20 years of combat in Afghanistan.”

Afghanistan, another international crisis that America fumbled in the last 18 months, was not lost on McChrystal’s watch. He abruptly resigned in 2010 after Rolling Stone reported that he and his aides talked smack about then President Barack Obama and now President Joe Biden, a story which a subsequent Pentagon investigation was unable to substantiate. He claims the article was inaccurate and now teaches a class on the episode in his leadership series at Yale. (It’s about moving on.) McChrystal is not averse to admitting he’s made mistakes; for instance, he wishes he’d spoken up more clearly about his doubts that the second Gulf War was a good idea, even though he was only a two-star general at the time. (See chapter 3: Action).

But it’s clear he regrets leaving Afghanistan — and some part of him thinks things may have gone differently if he hadn’t. When asked if the counterinsurgency could have succeeded had the Rolling Stone article never run, he hesitates. “My heart would have told you that, but I’m not arrogant enough,” he says. “I just wouldn’t be honest if I said I think that if Stan McChrystal had stayed, the outcome would necessarily be different, because they replaced me with General Petraeus who is incredibly competent.” However, if it were up to him, the U.S. would still be there, he says, because “I loved the Afghans and I’d have probably stayed there forever.” (See chapter 8: Bias.)

A scene from McChrystal's office at the McChrystal Group in Alexandria.
Peter van Agtmael—Magnum Photos for TIME

McChrystal was not surprised by how quickly the Taliban took over the country. “War is fought and decided in the minds of people,” he says. He uses the analogy of parents who can’t decide if they’re going to divorce, and one of them keeps leaving or threatening to leave. “The child starts to just absolutely be paranoid about that parent leaving,” he says. “That was Afghanistan.” Every President in the last dozen years has declared his intention to pull troops out, which destroyed Afghans’ confidence. “If you think the system is going to collapse,” he says, “it becomes self-fulfilling.” Fear, along with the incompetence of their government and army, left many Afghans open to the Taliban’s psy-ops efforts. “[The Taliban] go into the villages and provincial capitals, and they say, ‘Hey, what’s coming? We’re coming. We’ll be here,’” says McChrystal. “Nobody wants to be the last person to die in a war.’” (Chapter 10: Timing.)

But to the general, the biggest threat America now must face down is neither the Taliban nor a global pandemic. It’s disinformation, or as he calls it, “the ability to pollute our consciousness.” The hidden threat of disinformation is not just that people will believe the wrong thing, but that they will start to think the wrong way. “[Disinformation] can shape the way we think,” he says. False information can be corrected, but “if you change the way I think, the very logic process I go through, then you’ve changed a cultural part of society, and you’re going to get a skewed response.” McChrystal thinks it’s a faulty pattern that is enhanced not just by social media—he’s no fan of Twitter—but by mainstream media on both sides of the political aisle. Information he says, has “the potential and the power of weapons of mass destruction.”

Seeing disinformation as a bigger threat than either disease or conflict is in keeping with McChrystal’s soldier-scholar persona. He has a bookworm’s heart. His idea of a good time is to sit for several hours in an armchair next to his wife, reading. Currently it’s one of the poet Carl Sandburg’s books on Abraham Lincoln. He doesn’t drive a car. The only weapons visible in his house are historic ones, and he supports gun control. He does not like the army’s current “What’s your warrior” marketing campaign, because “warrior” speaks of barbarism to him. He even has nutty professor ideas, including that all clocks around the world should be set to the same time, and humans should adjust accordingly. They’d still get up in the morning, but dawn might be at 2300 hours.

Still, McChrystal has maintained many of his military ways. He gets up at 4:30 a.m. and works out for two hours in his mini-gym above his garage, though he can’t run anymore because of a fused spine. He only eats one meal a day. He hates wearing what he considers nice clothes. He’s loyal to his fellow soldiers; a lot of his employees are ex-military. His personal assistant was a master sergeant, his chef —or the guy who cooked us lunch—was enlisted, his office manager was a command sergeant major, and the cohost of his podcast is a former Navy Seal. His house is filled with paraphernalia given to him by men he met or commanded in such former units as the 82nd Airborne and the 75th Rangers, flags and plaques and hasty handwritten pledges, and so very many pictures of people fighting throughout the centuries.

Many people, including Obama, reportedly, felt bad about how McChrystal’s 34-year career in the army ended. He comes from a military family. He didn’t apply to any colleges except West Point, never even considered a different career. His four brothers all joined the military for at least five years. His sister married a soldier. And yet his entire military life evanesced in just hours.

But their pity is wasted. McChrystal is fine. He has an 85-person team, who work, when offices are open, within a four-block walk of his home, and a two-block walk of the water. His three grandchildren live opposite him. His daughter-in-law works for him. The leadership-guru business has been doing quite nicely. The most dangerous thing he has done recently—”probably the most hazardous thing I’ve done ever in my life,” he jokes—is change in the grimy mens bathroom in New York City’s Penn Station. (He really does hate nice clothes.) The day we met he was advising a small team of executives at a software company that grew leaps and bounds during the pandemic. Executives there were seeking advice on how different divisions of the firm could stay in close communication while scaling up. “You have to find ways to create connectivity between those organizations that keeps them focused, you don’t want them to forget the small group,” he says. “But you want them also to identify and feel comfortable with the larger whole.”

Nobody takes orders from McChrystal anymore. But they pay him handsomely for his advice, which is probably even better. You can read about it in Chapter 11: Adaptability. 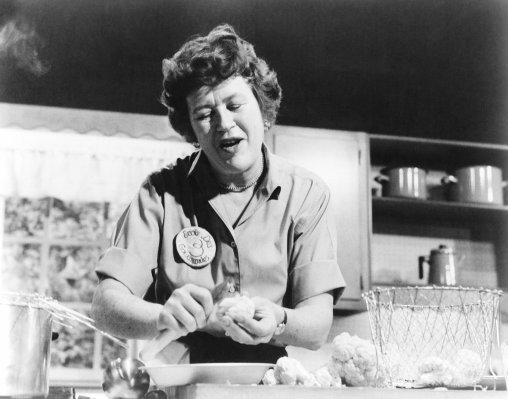 Stanley Tucci: How Julia Child Changed My Life
Next Up: Editor's Pick