Demonstrators gather during a Planned Parenthood Day of Action Rally in the Brooklyn borough of New York, U.S., on Thursday, Sept. 9, 2021.
Desiree Rios–Bloomberg/Getty Images
By Michael Smith and Jonathan Levin/Bloomberg

A Florida legislator has proposed banning most abortions in the state and allowing lawsuits against doctors who violate it, mirroring a Texas law that instituted the strictest abortion restrictions in the U.S.

It wasn’t immediately clear how much support the bill would garner. The Republican-controlled Florida legislature has shown significant support for tighter abortion policies, but Governor Ron DeSantis said he hadn’t reviewed this specific proposal and the GOP House speaker was similarly noncommittal on Wednesday.

The bill, proposed by state Representative Webster Barnaby, a Republican, would require doctors in Florida to perform tests to determine if a fetus has a detectable heartbeat before performing an abortion.

If a physician detects a heartbeat, according to the bill, abortion would be prohibited. The measure also would allow doctors to be sued if suspected of performing an abortion after detecting a heartbeat, matching a powerful provision in the Texas law, known as Senate Bill Eight, or SB-8.

The bill appeared to be a clear example of a Texas copycat law in another large, GOP-controlled state. In the days after the Texas law took effect, abortion clinics turned away hundreds of patients. It was seen by abortion-rights supporters as an end-run around Roe v. Wade, the 1973 Supreme Court decision that has been the foundation of abortion rights in the U.S. ever since.

Florida’s Republican House Speaker Chris Sprowls said through a spokesman that he supported stricter abortion restrictions, but said that any bill brought to the floor would have to withstand judicial scrutiny.

“We look forward to bringing to the Floor a bill that saves every unborn life possible,” he said. “I have asked House Judiciary Committee Chairwoman Erin Grall and House Health & Human Services Chairwoman Colleen Burton to review the various proposals, look at other ideas, and take point on this issue this Session.”

Still, the Florida proposal sparked immediate condemnation from abortion rights advocates, who called legislation unconstitutional and part of a flurry of harsh restrictions on women’s rights.

“We are horrified to see anti-choice politicians in Florida following in Texas’ footsteps, and there’s no question that lawmakers hostile to reproductive freedom in other states will do the same,” Adrienne Kimmell, acting president of Naral Pro-Choice America, said in a statement.

Early this month, a sharply divided U.S. Supreme Court refused to block the Texas law, which outlaws most abortions after six weeks of pregnancy. SB-8, bars abortion after a fetal heartbeat can be detected and puts clinics at risk of being shut down if they are found to be in violation.

Asked about Barnaby’s bill on Wednesday in Kissimmee, DeSantis said he considered his record “100% pro-life” but added that he had not seen it.

DeSantis, a Republican seen as a potential presidential candidate, has rejected coronavirus mask mandates and so-called vaccine passports, saying his position is largely about an individual’s right to determine their health-care choices. He said Wednesday that the abortion question was different because “another life is at stake.”

Democratic candidates vying to replace DeSantis in the 2022 election firmly opposed the legislation.

“This is a direct attack on a woman’s right to choose,” Charlie Crist, a former governor, said on Twitter. “We’re going to have to fight tooth and nail to protect reproductive freedom.” 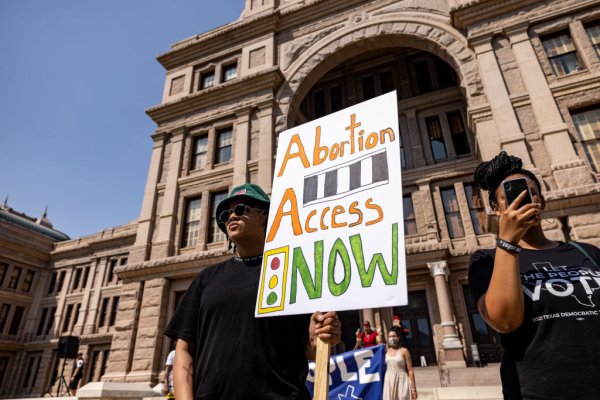 How Texas’ Abortion Ban Will Lead to More At-Home Abortions
Next Up: Editor's Pick