A private lawyer with links to Democrats and Hillary Clinton was indicted Thursday by Justice Department Special Counsel John Durham over allegations that he made a false statement to the FBI in 2016, as an inquiry into the origins of the bureau’s Russia probe grinds on.

The lawyer, Michael Sussmann, met with the FBI’s then-general counsel in September 2016 to convey information that might have indicated a covert communications channel between the Trump Organization and a Russia-based bank, according to the 27-page indictment.

Sussmann told the FBI official that he wasn’t providing the allegations on behalf of any client, prosecutors said. However, the indictment alleges that “Sussmann assembled and conveyed the allegations to the FBI on behalf of at least two clients, including a U.S. technology executive and the Clinton presidential campaign.”

The indictment indicates that Durham is pursuing a legal theory that Democratic operatives intentionally fed the Federal Bureau of Investigation information to harm the candidacy of Donald Trump, who by that time was the Republican nominee for president.

The indictment is likely to fuel political grievances by conservatives that Trump was the target of a conspiracy that tried to tie him to Russia. Trump and his supporters have separately made unfounded allegations that FBI officials were part of a plot to harm his candidacy and presidency. Durham’s indictment, however, alleges that the FBI was the victim of a crime and misinformation.

“Michael Sussmann was indicted today because of politics, not facts,” his lawyers, Sean Berkowitz and Michael Bosworth with the law firm Latham and Watkins LLP, said in a statement. “The special counsel appears to be using this indictment to advance a conspiracy theory he has chosen not to actually charge.”

“At its core,” they added, “the special counsel is bringing a false statement charge based on an oral statement allegedly made five years ago to a single witness that is unrecorded and unobserved by anyone else.”

Sussmann was a partner in the law firm Perkins Coie, working in the Washington office. On Thursday evening, the firm said he had resigned.

The FBI investigated the allegations that a computer service at the Trump Organization was communicating with Russian-based Alfa Bank and “ultimately determined that there was insufficient evidence to support the allegations,” according to the indictment.

Durham, then U.S. attorney in Connecticut, was appointed to the special counsel post in April 2019 to look into whether the FBI or intelligence officials committed crimes when they investigated whether anyone associated with Trump’s 2016 presidential campaign conspired with Russia to interfere in that year’s election. Durham was named special counsel by then-Attorney General William Barr in October 2020, a move that allowed his inquiry to continue into the Biden administration.

Trump and his conservative allies have made repeated and unsubstantiated claims that a cabal of “deep state” figures illegally spied on his 2016 campaign and took actions to sabotage his administration after he was elected. Although they’ve been counting on the Durham investigation to uncover scandals to back up their assertions, frustration has grown with the lack of new developments and silence from the special counsel’s office.

“Where’s Durham?” Trump asked in a statement in March, six months after losing the 2020 election to Joe Biden. “Is he a living, breathing human being? Will there ever be a Durham report?”

Durham’s work has now gone on longer than the investigation by Special Counsel Robert Mueller, who took over the original Russia interference probe in May 2017 and concluded it in March 2019. Critics continue to question the value of Durham’s inquiry and whether it should be shut down.

More than two years in, Durham has secured one guilty plea from a former FBI lawyer who acknowledged falsifying an email when seeking to renew a secret warrant to conduct surveillance on Carter Page, a former Trump campaign aide. The lawyer, Kevin Clinesmith, admitted he changed the email to incorrectly say that Page hadn’t been a CIA source. He pleaded guilty last August to falsifying a document.

By comparison, the Mueller investigation resulted in 34 indictments, the conviction of a Trump campaign manager, Paul Manafort, for unrelated financial crimes and a guilty plea from Trump’s first national security adviser, Michael Flynn, for lying to the FBI. Trump pardoned Manafort and Flynn late last year, before leaving office.

Mueller also documented almost a dozen examples of possible obstruction of justice by Trump, and his investigation exposed a massive criminal conspiracy by Russian operatives to interfere in the 2016 election.

–With assistance from Christopher Opfer. 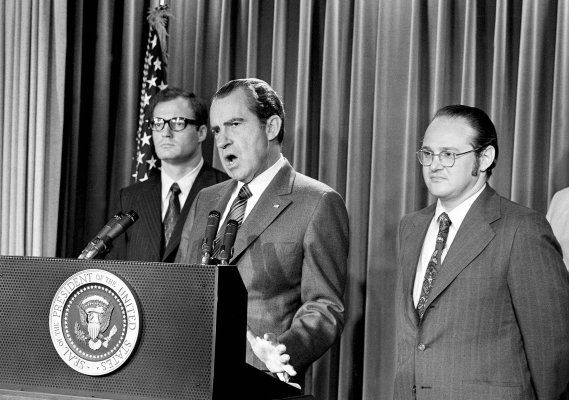 New Documents Reveal the Origins of America's War On Drugs
Next Up: Editor's Pick