Australia Plans to Build a Fleet of Nuclear Submarines to Counter China—With U.S. and U.K. Help

Australia is joining a new Indo-Pacific security partnership with the U.S. and U.K. that will allow it to acquire nuclear-powered submarines, sparking a rift with France at a time when the Biden administration is pushing allies to counter Chinese assertiveness.

Australian Prime Minister Scott Morrison, U.S. President Joe Biden and U.K. Prime Minister Boris Johnson announced the security partnership in a virtual meeting on Wednesday. France said the move halted a 2016 deal with French military shipbuilder Naval Group to build up to 12 submarines, a project that had blown out to an estimated A$90 billion ($66 billion).

The first major initiative “will be to deliver a nuclear powered submarine fleet for Australia,” Morrison said, who said the vessels would be built in his country. “Over the next 18 months we will work together to seek the best way forward to achieve this.”

In a press briefing, Morrison defended the decision and said he understands it’s disappointing for France. Touting a “forever partnership” with the U.S. and U.K., he said would take as many as 18 months to work out details of the agreement before work on the subs begins.

“As a prime minister I must make decisions that are in Australia’s national security,” Morrison said. “I know that France would do the same.”

The decision to scrap the program was “contrary to the letter and spirit of the cooperation that prevailed between France and Australia” and shows “a lack of coherence,” France’s Minister of Europe and Foreign Affairs Jean-Yves Le Drian and Armed Forces Minister Florence Parly said in statement.

“The regrettable decision that has just been announced regarding the FSP program only reinforces the need to make the issue of European strategic autonomy loud and clear,” the French ministers said. “There is no other credible way to defend our interests and our values in the world, including in the Indo-Pacific.”

The new framework comes as China increases its military capability and influence in the Asia-Pacific, though a senior U.S. official said it isn’t targeting China or any other country. As part of the agreement, the countries intend to increase cooperation on other defense measures, such as cybersecurity and artificial intelligence.

“We all recognize the imperative of ensuring peace and stability of the Indo-Pacific over the long term,” Biden said. “We need to be able to address both the current strategic environment in the region and how it may evolve, because the future of each of our nations and indeed the world depends on a free and open Indo-Pacific, enduring and flourishing in the decades ahead,” he added.

The nuclear-powered submarines would be conventionally armed, the president added. The countries will begin 18-months of talks over requirements that must be met for obtaining the submarines, and to ensure compliance with existing treasures. Australia isn’t seeking nuclear weapons, Morrison added.

“Only a handful of countries possess nuclear-powered submarines, and it is a momentous decision for any nation to acquire this formidable capability and perhaps equally momentous for any other state to come to its aid,” Johnson said.

Reports that the submarine deal would be scrapped came as a surprise to the French company, according to a person familiar with the matter. Naval Group had met all its contractual obligations to date, from pricing to timelines to pledges for local production in Australia, the person said. It had expected commitments over 50 years under its contracts and would intend to negotiate a breakup fee as a result.

While Morrison didn’t mention the Naval Group deal in his statement, he said the nuclear-submarines would be built in Adelaide in close cooperation with the U.K. and U.S. That city is where Naval Group has been planning to build the 12 conventionally-powered submarines in a program that has been hit by reports of time and cost over-runs.

The White House views the security pact as binding Australia to the U.S. and U.K. for generations and pointed out that it comes during the 70th anniversary of the Australia-New Zealand-U.S. Security Treaty, ANZUS.

The new alignment is seen as a rare, one-off engagement, meaning there’s no plan for additional countries to join the framework, a U.S. official said.

Biden had a telephone conversation with Chinese President Xi Jinping last week to complain about Beijing’s lack of engagement on bilateral and global issues such as climate change and the Covid-19 pandemic.

Biden proposed an in-person meeting with Xi but the Chinese president declined to commit to one. White House Press Secretary Jen Psaki said there are ongoing discussions “about what the next steps should be about engagement on the leader-to-leader level.”

Biden mentioned this trilateral plan in his conversation with Xi, though he didn’t share specifics, one official said. The Biden administration will explain the intentions behind the pact — which the countries are calling AUUKUS — to countries that are interested, the official added.

The pact will be seen as a coup for Morrison, who has been aiming to ramp up his nation’s involvement in U.S.-led pacts in a bid to counter what he sees as an increasingly assertive China in the Indo-Pacific. That’s included crafting the Five Eyes intelligence-sharing network into a group that’s increasingly issuing statements criticizing Beijing’s human rights record and bolstering the Quad security arrangement that also involves Japan and India, and is due to hold its first leaders’ level meeting in Washington this month.

Under Morrison’s watch, Australia’s relations with China — it’s largest trading partner — have nosedived in the wake of his government’s call last year for independent investigators to enter Wuhan to probe the origins of the coronavirus. Beijing has since inflicted a range of trade reprisals, including crippling tariffs on Australian barley and wine, while blocking coal shipments.

Herve Lemahieu, a director of research at the Lowy Institute, described Morrison’s new deal as momentous, with Australia set to become just the seventh nation to operate nuclear-powered submarines.

“It does send a very clear signal,” Lemahieu said in a Bloomberg Television interview. “This is very clearly designed to bolster alliances amid rising tensions with China over disputes ranging from the South China Sea to Taiwan. There is no way America would be sharing this kind of technology with Australia if it weren’t for China.”

–With assistance from Ania Nussbaum and Jennifer Epstein. 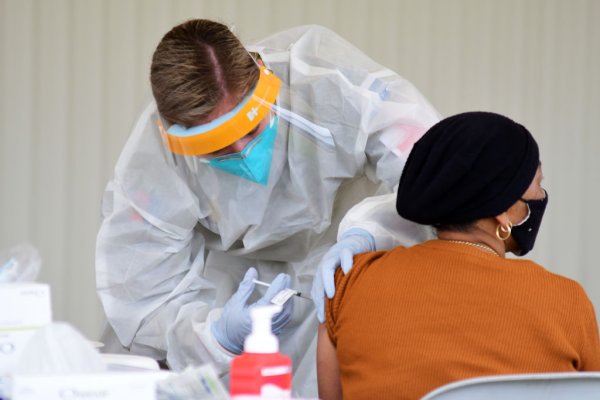