In the end, the camping trip up the flank of Mt. Rainier that the Inspiration4 crew made back in April may have done more than anything else to prepare them for tonight’s successful launch into Earth orbit, at 8:02 p.m. ET from pad 39A at Cape Canaveral, Florida. Even the day before the launch, at a T-minus-27-hour press conference, they were still talking about the experience and what it taught them.

Hayley Arceneaux, 29, a physician assistant at St. Jude Children’s Research Hospital and who tonight became the first person to fly in space with a prosthetic—a rod in place of her left femur, which she lost to childhood cancer—called the hike the most daunting and transformative part of the training, one that forged powerful bonds among the all-civilian crew members. “It was 10 hours of hiking and three days of camping with four people in small tents,” she said.

Chris Sembroski, 41, an engineer at Lockheed Martin in Everett, Washington, sees the three days the crew will spend in orbit before their Saturday splashdown as, in some ways, nothing more than an extension of the Mr. Rainier trip. “It will be like camping with your three closest friends in a van for three days,” he said. Sembroski even packed a ukulele for the journey, which he will use to perform a song from space as part of the mission’s goal of raising $200 million for St. Jude.

But if this is a camping trip, it began like no other, with a liftoff of the Falcon 9 rocket carrying Inspiration4’s SpaceX Crew Dragon spacecraft precisely on time on a warm but breezy Florida evening, with temperatures of 81º F under a partly cloudy sky. At T-0, the nine engines on the 230-ft. Falcon lit and the rocket muscled itself off the pad. The first stage burned for 156 seconds, carrying the crew 50 miles high before cutting off on schedule and coming in for an upright landing on a recovery barge. Then the second stage ignited, and just over eight and a half minutes after launch, the crew of Inspiration4 was in orbit.

Photograph by Philip Montgomery for TIME

The Inspiration4 mission was the brainchild of Isaacman, the billionaire CEO of Shift4 Payments, an online payments company, who bought all four seats aboard the Dragon for a reported $50 million apiece. The goal was to fly the first all-civilian, non-professional astronaut crew to space and, in the process, raise a bounty for St. Jude.

Isaacman knew from the start that he wanted a St. Jude employee on the crew, and the hospital recommended Arceneaux, who promptly accepted—after, as she likes to note, checking with her mom. Sembroski won his seat in a sweepstakes that he entered by making a contribution to St. Jude. The fourth crew member, Sian Proctor, 51, a professor of geosciences at South Mountain Community College in Phoenix, Ariz., had her ticket punched by winning a contest to design an online store using Shift4’s software. Proctor is only the fourth Africa-American woman to fly in space and, as second in command aboard Inspiration4, the first to carry the title “pilot.”

“This is really special,” she said at the press event. “One of my goals with this flight is to inspire the next generation of women of color.”

“Inspire” is a word that comes up a lot with this mission—and not just in its name. That’s the way Isaacman—a jet pilot who, as he says, could have just gone up with a bunch of his flying buddies if he had merely wanted to go to space—likes things. He even assigned each of the seats on the spacecraft the name of a quality he hopes the mission—and the astronauts—will embody. His own spot is the leadership seat; Arceneaux’s is hope, Sembroski’s is generosity and Proctor’s is prosperity. And if that seems as much marketing as anything else, it’s marketing that’s working: Isaacman donated the first $100 million to St. Jude out of his own pocket, but small donors have contributed another $30 million toward the final $200 million target. With the publicity generated by tonight’s launch and the three days the astronauts will be in space, that total is expected to grow.

While aloft, the crew will also be doing some hard science—and a bit of less-hard science. As medical officer, Arcneaux will be collecting saliva swabs and blood from fingertip pricks from the crew to conduct experiments on the microbiome in space, as well as conducting ultrasound experiments to analyze fluid shifts in the body in zero-g. Proctor, an artist in her terrestrial life, will be painting in space, and is anxious to learn about the fluid dynamics of water colors in a weightless environment.

The SpaceX Falcon 9 rocket and Crew Dragon is seen sitting on launch Pad 39A at NASAs Kennedy Space Center as it is prepared for the first completely private mission to fly into orbit in Cape Canaveral, Florida on September 15, 2021.
Chandan Khanna—AFP/Getty Images

The crew is also aiming for a record of sorts—flying to an ultimate altitude of more than 350 miles, about 100 miles higher than the International Space Station flies. That’s farther than any human beings have gone from Earth since the end of the Apollo lunar program in 1972. For Isaacman, scaling yet another mountain, this one off-planet, is about more than just bragging rights.

“We want to get outside of our comfort zone,” he said. “If we ultimately want to go to the moon and Mars we should start taking steps today so we can eventually make life interplanetary. I wish we pushed them to go even higher.”

There will be other perks to reaching that cosmic high ground. Since Inspiration4 is not going to the space station, SpaceX removed the docking collar at the nose of the Dragon and replaced it with a transparent cupola—the largest window ever built for space, and which should make for breathtaking sightseeing.

Much of the chatter surrounding the mission has involved the slow commercialization and, more aspirationally, democratization of space—an opening of the celestial door to more than just test pilots, rocket jocks and PhDs. If Inspiration4 is a step in that direction, it’s admittedly a small step. It still took a deep-pocketed and decidedly generous billionaire to make it happen—not a model that can be easily followed. But tonight’s launch nonetheless had irresistible appeal—for the character of the crew, for the charitable purpose of the mission, for the sweet and smooth liftoff on a soft Florida night. Inspiration4 may inspire more such flights; for now, this one is enough. 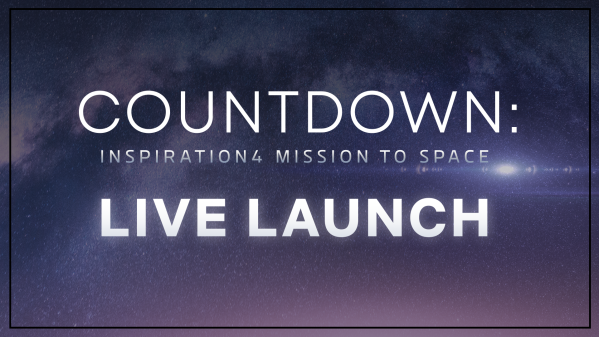 Watch Live as the Inspiration4 Crew Launches to Space
Next Up: Editor's Pick