Why the Federal Firearms Agency Can't Find a Permanent Director

The Bureau of Alcohol, Tobacco, Firearms and Explosives (ATF) remains without a leader after President Joe Biden’s selection of David Chipman to lead the organization was pulled on Sept. 9 after weeks of speculation and Chipman’s nomination languishing before the Senate. And with the U.S. continuing to deal with high levels of gun violence, questions continue to swirl about the agency’s future and the feasibility of its leadership.

Marvin Richardson, who in June 2021 was appointed the ATF’s deputy director, continues to serve as its acting director.

As a federal agency, the ATF is supposed to enforce the nation’s gun laws. This includes addressing interstate gun trafficking and working to stop the flow of illegal weapons both into and around the country. But since its leadership became a Senate-confirmed position in 2006, the ATF has only had one permanent director—Byron Todd Jones, who served during President Obama’s administration from 2013 to 2015 (and had previously served from 2011 to 2013 as acting director). Obstacles in the director’s confirmation process are due in large part to pressure from gun advocates and conservatives who fear that the organization will go after “gun rights.”

Chipman, who prior to his nomination, had worked most recently as a policy advisor at the Giffords Law Center to Prevent Gun Violence, had spent 25 years as a special agent with the ATF. His nomination to lead the organization was announced in April.

However, his confirmation hearings were contentious, with gun advocates and lobbyists working hard to discredit Chipman and his positions on firearms. (In particular, Chipman’s work with organizations to advocate for stronger gun regulations was framed as “anti-gun” by right-wing media outlets and gun rights groups, as was his support for an assault weapons ban.) He faced universal opposition from Senate Republicans, as well as from Independent Maine Senator Angus King, which essentially crushed his chances of leading the agency.

“I could factually say that [Chipman] is about as qualified as anybody has ever been who’s been nominated to head the ATF,” Daniel Webster, director of the non-partisan Center for Gun Policy and Research at Johns Hopkins, tells TIME.

“I think a lot of people are questioning whether this is an agency that can really function the way it was designed and should function due to the politics involved in it,” Webster says. “Now more than ever there are serious questions being considered about whether it makes sense for the ATF to be its own separate [agency].”

Read more: On Top of the Pandemic, Hospitals Face Another Crisis: Children and Teenagers Are Being Shot in Record Numbers

“Unfortunately, Republicans in Congress have made clear that they intend to use gun crime as a political talking point instead of taking serious steps to address it,” President Biden said in a statement after Chipman’s nomination was pulled. “That’s why they’ve moved in lockstep to block David Chipman’s confirmation, and it’s why they side with gun manufacturers over the overwhelming majority of the American people in opposing commonsense measures like universal background checks.”

Neither Chipman nor ATF representatives responded to TIME’s request for comment.

Experts point out that the lack of leadership directly impacts the agency’s effectiveness in doing its job—and that that’s no coincidence.

“The gun lobby has a long history of fighting ATF leadership, and the lack of leadership definitely hurts the agency,” Robin Lloyd, the Managing Director of the Giffords Law Center says. “The gun lobby in some way, shape or form has worked to oppose nominations [from] both Democrat and Republican presidents.”

According to Lloyd, the agency is really struggling with basic enforcement, like inspections of gun dealers or following up when they find business practices—like the selling of unregistered firearms, for example—that go against the law.

The ATF is relatively small compared to other federal agencies, with only 5,082 full-time employees. This is compared to 35,000 for the FBI, 10,000 for the Drug Enforcement Administration and 20,000 for the U.S. Immigration and Customs Enforcement (ICE). (It is also smaller than many police departments in the country.) Additionally, the department’s budget has for years been “stagnant,” as Lloyd puts it. The budget has only increased by six percent from 2010 to 2020. The 2020 budget was approximately $1.4 billion, compared to around $10 billion for the FBI, $3 billion for the DEA and $8 billion for ICE.

“Not having a permanent director really hurts the agency from having somebody go to Congress and advocate for their fair share of dollars,” Lloyd says.

Read more: What Counts as a Mass Shooting? Why So Much of America’s Gun Violence Gets Overlooked

The U.S. continues to deal with high levels of gun violence amid the COVID-19 pandemic. If properly funded and supported, the ATF could put a dent in the flow of weapons that make their way into communities that struggle with daily gun violence. Though without someone at the top guiding the agency, it’s unclear what direction the organization is headed, or the extent of its impact.

Biden has not announced a new nomination for the director opening, nor is it clear when such a replacement would be named; many of the gun policies his administration is championing remain unfulfilled.

“You are talking about laws and enforcement that is preventing guns from getting into the wrong hands—that can decrease arrests and incarceration,” Webster says. “I think too often we think of these root causes in these broad categories. Gun policy is part of that equation.”

Due to an editing error, the original version of this story misstated the year in which Marvin Richardson was appointed ATF’s acting director. It was 2021, not 2019. 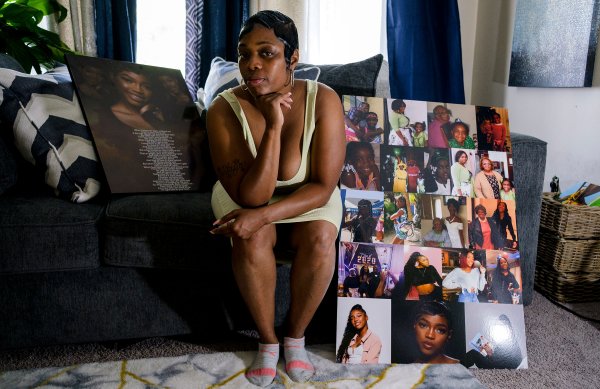 Children and Teenagers Are Being Shot in Record Numbers
Next Up: Editor's Pick