On a Solemn Day, Two Presidents Search for Unity in a Divided Time

The azure sky over lower Manhattan on Saturday morning was eerily similar to the bright morning of Sept. 11, 2001, twenty years before. President Joe Biden stood in a crowd under the canopy of oak trees planted where the World Trade Center towers fell that day, looking up briefly as the sound of a jet engine broke the silence. A single commuter plane could be seen floating in a gap of sky between buildings.

The echoes from that deadly morning opened up old wounds for retired flight attendant Ronald Gillis, 56, who came to the memorial service held to remember his brother Rodney C. Gillis, a New York police sergeant who died trying to help evacuate people from Ground Zero. His brother was in his early thirties when he decided to leave his vehicle and head toward the attack zone. “He didn’t turn away from it,” Gillis says. “He knew he was coming down here. He knew he had to help people.” That, Gillis says, was just how his brother was.

As the nation grapples with a long and deadly pandemic, a chaotic withdrawal from Afghanistan and a divisive political atmosphere, many who came to the ceremonies held on Saturday at the sites of the 9/11 attacks—in Manhattan, Shanksville, PA, and at the Pentagon in Virginia—were hoping to find some of the strength and solidarity that emerged in the immediate aftermath of the tragedy twenty years ago.

At the ceremony in Shanksville, former President George W. Bush stood on a stage at the memorial site and described how the attacks changed the lives of Americans “all at the same moment.” When it comes to “the unity of America,” he said, “those days seem distant from our own.” Bush, who had been in office less than a year on Sept. 11, 2001, has been widely praised by Republicans and Democrats alike for his efforts to bring the nation together after the attacks, despite the controversial legacy his war on terror would leave.

Looking out at the field where United Flight 93 crashed after desperate passengers banded together to overcome the hijackers, Bush, who has largely retreated from the nation’s political life in recent years, described a “malign force” currently at work in the country that turns “every disagreement into an argument, and every argument into a clash of cultures.” He offered a veiled critique of the violent uprising of Donald Trump supporters at the Capitol Building on Jan. 6: violent extremists abroad and domestic extremists “are children of the same foul spirit,” Bush said, in their “disregard” for human life.

Later in the day, Biden traveled from New York City to Shanksville and laid a wreath of red and white roses at a white marble wall carved with names of those who died on Flight 93. He walked with family members of the dead through the grassy field, lined with goldenrod wildflowers, to a large boulder that marks the spot where the plane fell. He stopped at the Shanksville Volunteer Fire Department to talk with firefighters, families and flight attendants who had gathered for the commemoration. Long tables were set out, and burgers and hot dogs were cooking on a grill.

A reporter asked Biden what he had been thinking about during the day; he said he was thinking about a friend who lost a son when the Twin Towers fell, and about what those who died would make of the heightened level of vitriol in the country.

“Would they think this makes sense for us to be doing this kind of thing where you ride down the street and someone has a sign saying ‘F- so-and-so?’”, said Biden, referring to a banner in New Jersey aimed at him that was seen on Sept. 7 as he toured damage from Hurricane Ida.

Standing outside the firehouse next to a memorial cross built from girders from the fallen World Trade Center, Biden said autocrats running totalitarian states like China and Russia are rooting against the U.S. being able to unify and get things done. That’s one reason why he wants to bring the country together—to prove that democracy can work, he said.

“They think because the world is changing so rapidly and people are so divided, you can’t bring people together in a democracy to get a consensus, and the only ones that are going to be able to succeed are the autocrats,” Biden said. “I think we can do it. We got to do it.”

Biden then flew in Air Force One back to Washington, where he visited the memorial to those lives lost when one of the hijacked planes crashed into the Pentagon. As Biden and First Lady Jill Biden stood, a Marine bugler played taps. 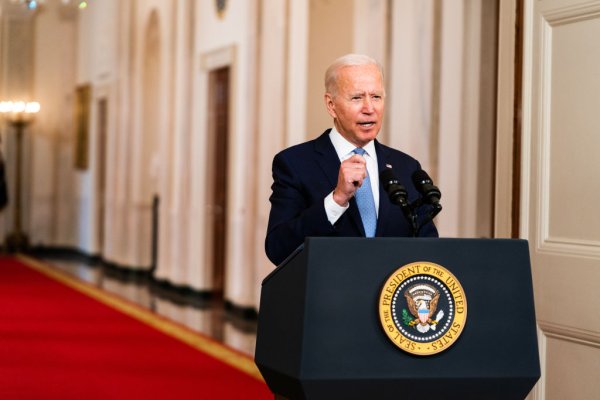 Joe Biden Wants to Honor 9/11—By Moving On From National Security Priorities That Defined the Past 20 Years
Next Up: Editor's Pick