Norway's Fossil Fuel Reliance Is Going to the Ballot Box

MALSELV, NORWAY - AUGUST 07: Erna Solberg, Prime Minister of Norway, speaks at podium ceremony on August 07, 2021 in Malselv, Norway.
Stuart Franklin — Getty Images
Ideas
By Ian Bremmer
Bremmer is a foreign affairs columnist and editor-at-large at TIME. He is the president of Eurasia Group, a political-risk consultancy, and GZERO Media, a company dedicated to providing intelligent and engaging coverage of international affairs. He teaches applied geopolitics at Columbia University’s School of International and Public Affairs and his most recent book is Us vs. Them: The Failure of Globalism.

Fossil fuels helped to catapult Norway from a stable but small fishing and timber economy into one of the wealthiest and most progressive welfare states in the world.

Now, climate change is forcing the country to consider slaughtering its cash cow/golden goose (pick your preferred animal metaphor) in exchange for living up to its environmental ambitions, as an estimated 3 million Norwegians head to the polls on Sept. 13 in a parliamentary election that has centered on the issue of whether saving the planet is worth stopping the fossil fuel gravy train.

Norway fancies itself a green nation. According to a report by the U.N. Special Rapporteur on human rights and the environment, David Boyd, the country has a “strong environmental record.” Its air and water are pristine, and the vast majority of electricity is generated by emissions-free hydropower plants. The country is a leader in renewable energy production. Environmental regulations are stringent, with fossil fuel use banned for heating buildings and strong incentives for the purchase of electric cars. In August, 70% of new vehicles sold were fully electric—more than in any other country. Norway was also one of the first nations in the world to introduce a carbon tax, in 1991.

By most measures, the country is also at the front of global efforts to combat climate change. Norway devotes substantial resources to combating deforestation in the developing world through its International Climate and Forest Initiative and is a top donor to the Green Climate Fund. The government has invested strongly in R&D, especially for the development of carbon capture and storage (CCS) technologies. The nation’s key financial institutions, including its central bank and its sovereign wealth fund, have divested from coal-related businesses and they are phasing out investments in companies involved in oil and gas exploration and production, instead re-directing capital toward unlisted renewable energy ventures. These policies have broad popular support, especially among young and urban citizens who increasingly rate climate as their most important policy priority.

But beneath its green veneer, Norway remains the most fossil fuel-dependent industrialized democracy in the world. Crude oil and natural gas account for 41% of exports, 14% of gross domestic product (GDP), 14% of government revenues, and between 6% and 7% of employment. Home to the largest hydrocarbon reserves in Europe, the country is the world’s third largest exporter of natural gas, and one of the top exporters of crude oil. Norway’s total petroleum production is forecast to increase until 2024 or so.

Even domestically, per capita energy demand and usage are higher than in the rest of Europe. Greenhouse gas emissions have barely decreased since 1990. And owing largely to its reliance on fossil fuel production, which is the country’s biggest source of emissions, Norway is currently on track to cut carbon emissions by only 14% to 21% below 1990 levels by 2030—far below the target reduction set in its Nationally Determined Contribution (NDC) of at least 50% to 55%.

Norway’s oil-focused sovereign wealth fund, the Government Pension Fund Global (GPFG), was created to invest oil revenues into preparing the country for an oil-less future. With more than $1.3 trillion in assets, the GPFG is the world’s largest rainy-day fund. Paradoxically, the country’s ability to provide climate stewardship and leadership on the global stage was built on the back of fossil fuels—as was its generous welfare state.

The clear dissonance between Norway’s economic model and its environmental aspirations is about to be put to the test at the ballot box. Nowhere and never has climate been so politically salient and economically significant as it is in Norway’s upcoming parliamentary election.

On one side, there are the establishment parties—the Conservatives and Labour—which have come to terms with the need for an eventual, if gradual, transition away from oil and gas, but won’t be proactive in bringing it about. They have pledged to stand by industry and have ruled out halting oil and gas production in the near term, fearing the economic consequences.

On the other side of the debate, the left-wing Socialist Left Party and the center-left Green Party have campaigned on climate issues and have committed to banning new exploration licenses, with the latter also vowing to halt all production by 2035. Indeed, the Greens have unambiguously ruled out joining a government with any party that opposes banning oil and gas exploration immediately.

No single party—there are nine of them—is projected to win a majority. The Labour Party currently leads the polls with about 24%t vote intention, trailed closely by the Conservative Party at 20%. But the drop in support for the Conservatives’ partners makes it unlikely that a center-right coalition could command a majority, meaning that the incumbent government led by Prime Minister Erna Solberg’s Conservatives will almost surely be unseated.

Labour is best placed to form a coalition government, but its two most natural partners are the Socialist Left (polling at 9%) and the Greens (polling at 5%), which have staked out red lines on climate that Labour seems loath to abide by. These and other small parties outperformed traditional parties in the 2019 regional elections, as voters rode the wave of discontent sweeping Europe and abandoned establishment parties in droves. Their influence has only risen since, with the Greens’ membership rolls increasing by more than 30% just in the last few weeks. They are now projected to win as many as eight of Norway’s 169 parliamentary seats. Not bad for a party that has never won more than a single seat.

In fact, if they perform as expected, the Greens could be the kingmakers or dealbreakers for a Labour-led government. While Labour had said that it would not go into government with any party that insisted on an immediate stop to exploration or production, ultimately it may not have a choice. The Greens’ unconditional demand means that Labour’s position on this issue could make the difference between having a viable coalition to lead and being left out of government altogether.

What is certain is that this election will make Norway reckon with an inescapable choice: to fully divest from fossil fuels now on its own terms, or to wait until it’s inevitably forced to do so later. The tradeoff is not values versus interests, but rather short-term interests versus long-term interests. And as the fossil fuel producer with the highest per capita GDP in the world, Norway is better placed than most countries to take the long view. Cushioned by a sovereign wealth fund designed for this very purpose, its welfare state is developed enough to manage a just transition that adequately compensates affected workers and communities.

It will be up to voters to decide whether they are willing to take the plunge. 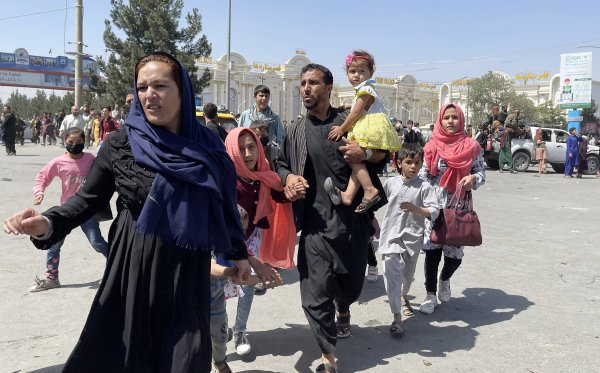 The U.S. Turned Away Jewish Refugees in 1939. We Must Not Repeat History With Afghans Fleeing the Taliban
Next Up: Editor's Pick