Why Didn't We Leave Afghanistan Before Now? A Fear That Presidents Could Not Ignore

Dr Carter Malkasian is a military historian who served as a civilian adviser to the U.S. in Afghanistan. His most recent book is The American War in Afghanistan: A History

It is hardly remarkable to say that success for the United States in Afghanistan was never likely. For years, experts, scholars, and officials have coalesced on a common set of causes for failure—local grievances, political factionalism, corruption, Pakistani safe havens, and a deep-seated Afghan resistance to occupation. All are notoriously intractable.

The difficulty of changing the course of the Afghan war begs the question why the United States didn’t just leave and curtail the expense. “The failure of American leaders—civilians and generals through three administrations, from the Pentagon to the State Department to Congress and the White House—to develop and pursue a strategy to end the war ought to be studied for generations,” read the New York Times editorial page in February 2019.

I have met few Americans who disagree that after September 11, 2001 we were right to go in to Afghanistan, hunt down al-Qaeda, and overthrow the Taliban. To the end of 2019, Gallup and other credible public opinion polls found that a majority of Americans never believed that the U.S. decision to invade Afghanistan was a mistake. Yet, in my anecdotal experience, most Americans also assume we should have left some time after that.

So why didn’t we leave? To some extent, we didn’t understand Afghanistan. The lightning toppling of the Taliban regime in 2001 defused early concerns in the Bush administration that Afghanistan would become a quagmire. The success of the surge in Iraq a few years later encouraged U.S. military and civilian leaders in the Obama administration to think that the Afghan democracy might be enabled to stand on its own.

Another argument is that U.S. generals and military officers did not want to leave. There is something to this, though perhaps less than meets the eye. At times, high-ranking military officers put forth plans to reinforce Afghanistan, such as for the 2009 surge or the Trump administration’s 2017 South Asia strategy. At other times, they requested that withdrawal timelines be extended or removed, such as when Taliban offensives endangered the democratic government in 2015 and 2016.

Such actions, many of which were the natural and correct part of the national security decision-making process, raised the political costs for any president seeking to withdraw. If things went bad, the president could be accused of acting against the advice of the military.

Read more: I Was Deeply Involved in War in Afghanistan for More Than a Decade. Here’s What We Must Learn

But when trying to understand why we didn’t leave, the heart of the matter really comes down to terrorism and its domestic political implications. The overriding question in all policy debates was what level of terrorist threat would emerge if the democratic government in Afghanistan fell. Indeed, generals would have had no leg to stand on without the very real and palpable terrorist threat.

The Sept.11 attacks ignited a fear that presidents could not ignore. Previously a minor irritation, terrorism transformed into a real threat to the United States, with the potential to involve chemical, biological, or nuclear weapons.

In the early years of the war the political atmosphere in the United States was charged with risk of another attack on the homeland. Throughout 2002, various Gallup polls showed 50–85 percent of Americans worried that a terrorist attack on the United States was likely. President Bush never considered declaring victory and going home. He, Powell, Rice, and Rumsfeld agreed that the key lesson of the 1990s in Afghanistan was that, by ignoring the country after the fall of the Soviet Union, the United States had allowed terrorism to fester.

The threat of terrorism declined during President Obama’s presidency, yet he too could not ignore it. During the 2009 debate over whether to surge tens of thousands of troops to Afghanistan, Obama shelved any plans for withdrawal. According to the vast number of books and articles, at no point during the debate, from early 2009 to the final decision, was full withdrawal formally discussed.

Only after the surge and the death of Osama bin Laden in 2011 did Obama lay out a plan to withdraw by the end of his presidency. But then the Islamic State rose in Iraq in 2014 and the Taliban threatened to overthrow the Afghan democracy with its offensives in 2015 and 2016. The intelligence community assessed that if the drawdown went forward on schedule, security could deteriorate to the point that terrorist groups could form a safe haven in Afghanistan. With that backdrop, Obama accepted, with revisions, the requests of his generals and Defense Department to stay in Afghanistan.

The same fate befell President Donald Trump, by far the U.S. president most disgusted with Afghanistan. He too declared all U.S. forces would leave, only to reverse course. He succeeded in reducing forces to the lowest number since U.S. troops arrived, but even the diminishing threat of terrorism dissuaded him from fulfilling his desire to get out.

In another place and time, domestic pressure might have compelled a president to withdraw much earlier. Afghanistan never curried that kind of opposition. Presidents confronted little popular opposition to staying, however confused Americans were by the war. Not so with leaving. A president had to worry about political blowback to an attack on the homeland. Leaving was more politically dangerous than staying.

Only President Biden actually managed to end the war for America. Something must be said for his longstanding distaste for the war. Yet we can also see how the context had changed. The shadow of Sept.11 was receding, finally. The Islamic State had been defeated and its leader, Abu Bakr al-Baghdadi, killed. In the Pentagon, fear of terrorism had been eclipsed by concern for the great power competition against China and Russia. As important, the COVID-19 pandemic was a vast new threat and ushered in new economic challenges.

It was no longer reasonable to assume that terrorism demanded that the United States worry about Afghanistan. In Biden’s words in April 2021, “We went to war in Afghanistan because of a horrific attack that happened 20 years ago. That cannot explain why we should remain.”

The tragedy of Afghanistan is that success was unlikely and getting out was difficult. There was no easy way out. Our war in Afghanistan is perhaps better viewed as a trial to be endured than a choice. That is not to absolve leaders from the many mistakes that were made. It is to have a realistic understanding of what the fears of America as a people wrought. 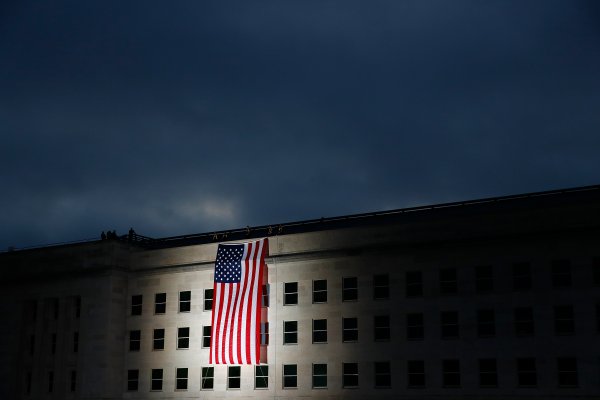 20 Years After 9/11, the West Can Still Salvage Its Standing in the World
Next Up: Editor's Pick