America's Time in Afghanistan Is Up. What We Owe to Their People Has No Expiration Date

When you’re waging a ‘Forever War’, the one thing you think you always have enough of is time. That’s what the successive U.S. presidential administrations, the Pentagon, and State Department believed until the Taliban took control of Kabul last month without a shot fired. The seemingly inexhaustible resource of time had finally run out.

I saw it happening. I was in the country for Amnesty International to investigate war crimes and document cases of civilian casualties caused by heavy fighting in places like Kunduz and Baghlan, part of the slow grind that didn’t make headline news until the provincial capitals started to tumble like boulders in a landslide.

First the earth moved slowly, then it collapsed in a rush. On Sunday, Aug. 15, just hours after the Afghanistan government collapsed, I was in a crowd of hundreds of people making our way across the runway at Kabul airport, trying to reach the military side of the airfield, the last place in the country safe from the Taliban.

The militant group had seized the capital city that morning, and by evening its fighters had entered the civilian side of the airport while we waited for a commercial flight that would never come. So hundreds of us took the only rational step left: run across an active runway, while the Marines on the other side opened fire and Apache helicopters dropped flares on our heads.

Some of the bullets from the M240 machine guns carved arcs of tracer light high into the night sky, some threw sparks as the Marines shot into the asphalt at our feet to scare us, and some cracked the tell-tale snap as they tore past our heads. As the bullets flew past my ears I threw myself on the ground. And then, because I trusted the Marines in front of me more than the Taliban behind, I got up and kept moving towards the American line.

I was one of the fortunate few to make it. I yelled “American!” and showed my passport, then got pulled to safety while the Afghans and Italians and Germans and Britons and U.S. green-card holders all got pushed away. The Marine officer who snatched me from the crowd and led me to the terminal for processing admitted he was surprised. He said they didn’t expect the desperate crowds so soon. They thought they had more time.

The U.S. set a deadline in Afghanistan, and yet still didn’t understand the clock was ticking. The panic at Kabul airport was the physical manifestation of much of the country’s anxiety that the window on their dream had shut.

Read more: The Afghanistan Biden and Trump Do Not See

Many in the crowds who thronged the airport in the weeks that followed were people who knew they would be particular targets of Taliban reprisals: journalists, interpreters, activists, human rights defenders, and government workers who has been trying to get to the United States for years. They had no delusions about how much time was left in the Forever War. They had done their paperwork and were trying to leave. It was the U.S. government that lacked the sense of urgency to quickly process their applications on time.

Of these, many had been trying to get out of the country at least since Obama’s surge ended in 2012; those who had faced danger, who had partnered with the international community, who had worked hard to build a civil society based on rights and freedoms. The numbers admitted to the U.S. through the Special Immigrant Visa program slowed to a trickle during the Trump Administration. And when President Biden took over, advocacy groups and members of Congress spent the first half of 2021 pressing the administration for a plan. Send those at risk and their families to Guam? To the Gulf? To Virginia? Anywhere, as long as it was soon.

But there was no real progress. And the world has run out of time to get Afghans out through military evacuations at Kabul airport as well.

And if food and medicine can come in, it means people can go out, either by airlift or over land borders. Everyone who is threatened by Taliban reprisals, revenge, and repression has the right to seek passage to safety. The U.S. government and rest of the international community must help uphold that right. So far, their efforts have been uninspiring: one thousand people, including Americans, are caught in Mazar-e-Sharif, their charter flights blocked from taking off by the Taliban, and neither the U.S. nor its allies seem capable of breaking the impasse.

America’s time is up in Afghanistan. But the obligations owed and commitments made to the human rights defenders, journalists, and activists still remaining in Afghanistan don’t have an expiration date. 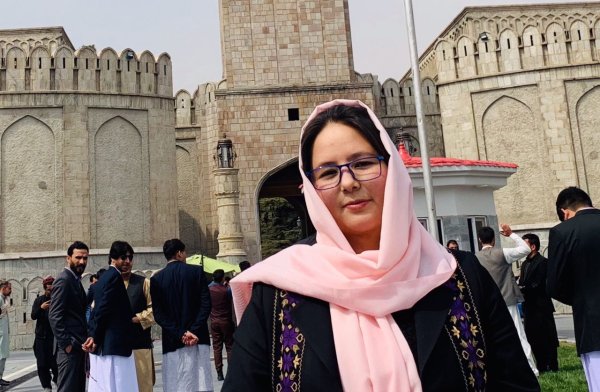 Far Fewer Female Journalists in Kabul After Taliban: Report
Next Up: Editor's Pick