The crisis hotline for the Dallas Area Rape Crisis Center is open all hours of the day, every day of the week. Trained volunteers answer roughly 1,800 calls per year, mostly from survivors of sexual violence, at times helping women who ask where they can talk to doctors about terminating their pregnancies.

But when the country’s most restrictive abortion ban went into effect in Texas on Wednesday, the Dallas group and other rape crisis centers across the state were immediately forced to limit the support they give to survivors of rape or incest, potentially impacting thousands of victims that both the United Nations and the World Health Organization say should have access to safe and legal abortions.

The new Texas law, titled S.B. 8, bans abortions for all individuals, including survivors of rape and incest, after the detection of a “fetal heartbeat,” which occurs at roughly the sixth week of pregnancy. It also encourages citizens to sue abortion clinics or “any person who knowingly engages in conduct that aids or abets the performance or inducement of an abortion” after the fetal heartbeat state.

Centers like the one in Dallas are now proceeding with caution, saying the law puts a target on their backs by opening them up to civil lawsuits if they are suspected of supporting a survivor’s abortion. “People call our hotline who just found out they are pregnant as the result of a sexual assault, and they’re trying to wrap their heads around it,” says Amy Jones, the Dallas crisis center’s CEO. Before Sept. 1, Jones says if someone asked for a referral for an abortion, the center would refer the caller to her own healthcare provider or to Planned Parenthood.

Now, Jones says, she has coached her staff on the careful language they need to use in responding to these calls. “We’re not trying to be evasive with callers. We don’t want to be cryptic. We don’t want to confuse anyone,” she says. “But we also don’t know how this is going to unfold, so we’re trying to walk that line of continuing to be a resource without getting sued.”

Several crisis centers declined to speak on the record for this article, for fear of retribution under the new law. “Rape crisis centers are understandably alarmed and concerned about how they can continue to support a survivor and her bodily autonomy after an assault,” the Texas Association Against Sexual Assault Director of Policy and Advocacy Elizabeth Boyce said in a statement.

Early Thursday morning, the Supreme Court released a 5-4 ruling that denied an emergency appeal to block the law from going into effect, despite its violation of the Court’s 1973 Roe v. Wade decision that protected a woman’s right to abortion prior to viability. Democrats on Capitol Hill and in the White House lashed out against the ruling, and President Joe Biden said it “unleashes unconstitutional chaos.”

“Complete strangers will now be empowered to inject themselves in the most private and personal health decisions faced by women,” Biden said in a statement. “This law is so extreme it does not even allow for exceptions in the case of rape or incest.”

Though the Supreme Court’s decision was welcomed by Republican lawmakers in Texas, most Congressional Republicans from Texas have remained quiet about the law, and some Republican politicians outside Texas have spoken out against S.B. 8. Sen. Susan Collins of Maine called the law “extreme and harmful.”

The law is also being questioned in conservative parts of Texas, survivor advocates say. The Turning Point Rape Crisis Center of Collin County is located in Plano, a city that Executive Director Wendy Hanna describes as “very, very conservative.” Hanna says she works with a lot of people who have deeply held beliefs about abortion and consider themselves pro-life and find the law “reprehensible” in the cases of child incest survivors and rape survivors.

“This isn’t a moral issue,” Hanna says. “This is a public health issue.”

Both the United Nations and the World Health Organization say abortions should always be available for pregnancies resulting from sexual violence. The Committee Against Torture in the Office of the High Commissioner for Human Rights has also criticized a similar ban in the past.

Jones says that at the Dallas Area crisis center, they will continue to train all of their volunteers and staff to listen as a neutral resource, rather than making any specific recommendations. But if they find themselves in a conversation with someone who had an abortion after the six-week point, and others found out the exchange took place, they could still be sued by individuals who accuse them of having helped in the procedure. The law has created a fear among staff that “if we do our job the way that we’ve I always done it, then someone could bring a lawsuit against us as an organization, as a CEO, as a volunteer,” Jones says.

The odds are “pretty good” that a crisis center could win a resulting lawsuit unless they directly arranged a person’s abortion procedure, Vladeck says. Even so, they would have to “spend a fair amount of money and time defending it,” and the law prohibits defendants from recovering any money they spent on their defense.

For many rape crisis centers with small staffs and budgets, the time demands and litigation fees could prove insurmountable. “That’s the risk,” he says. “At best it will be expensive, and at worst it will be very expensive…. I think the real fear is, it might even chill some groups from providing such services to those victims at all.”

Staff members at crisis centers say they will push ahead in helping the people who need them. “It’s the wild, wild West. We should all be worried,” says Hanna. “But that can’t stop what we do, that can’t stop us from fulfilling our mission.” 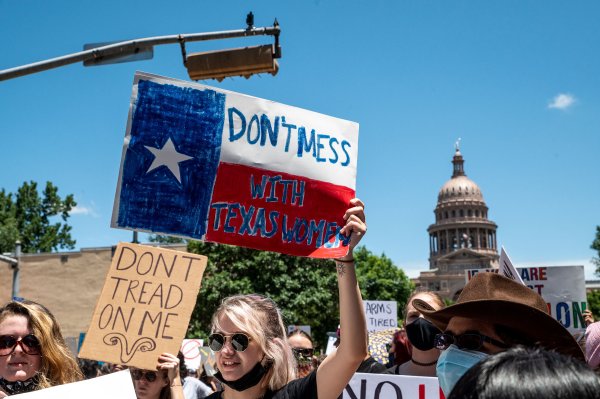 What Texas' Abortion Ban Means for Future of Abortion Rights
Next Up: Editor's Pick