It took 25 movies for Marvel Studios to produce its first Asian lead in a superhero film. In that time, fans protested the casting of Ben Kingsley as a character known as the Mandarin in Iron Man 3 as well as Tilda Swinton as the Ancient One, an Asian man in the comics, in Doctor Strange. And Asian characters like Randall Park’s Jimmy Woo, Benedict Wong’s Wong and Pom Klementieff’s Mantis have been relegated to supporting roles to white male heroes in movies like Ant-Man and the Wasp, Doctor Strange and Guardians of the Galaxy Vol. 2.

But Shang-Chi and the Legend of the Ten Rings, starring Simu Liu, finally hits cinemas on Friday, a coup for Asian representation in the most popular genre on the planet. It’s Marvel’s first movie directed by an Asian filmmaker, Destin Daniel Cretton. It’s also only the fourth film produced by a major Hollywood studio to feature a predominantly Asian cast, along with The Joy Luck Club, Crazy Rich Asians and last summer’s Mulan. But Shang-Chi wasn’t always an obvious barrier breaker. The character’s origin in the comics was mired in racist stereotypes. Most notably, his father in the original comics, Fu Manchu, was a caricature of a power-hungry, mystical Asian man.

The villain in Shang-Chi is the titular character’s father, Wenwu (Tony Leung), the leader of a criminal organization who wields—you guessed it—ten rings that imbue him with power.

Wenwu is part new invention, part a combination of several different Marvel characters from the comics. Though you can see little trace of him in the movie, Shang-Chi’s father in the comics is actually Fu Man Chu, a villainous character from literature, rooted in racism and stereotypes, that Marvel licensed in 1973.

In the 1910s, novelist Sax Rohmer, the story goes, consulted a Ouija board in order to come up with the character who would make his fortune. The answer came back letter by letter on the board: “Chinaman.” Not an auspicious start.

Rohmer went on to write a series of books about a mystic named Dr. Fu Manchu. The character was an avaricious Asian man, his one ambition in life to conquer the West. He had long curved fingernails, inhuman yellow skin and the long, thin mustache that would come to be named after him. Rohmer described him as “yellow peril incarnate.”

Fu Manchu became one of the most popular villains of the 20th century. He was recreated in TV, radio and film. Even Nicholas Cage played a version of him in Grindhouse. In the 1970s, Marvel tried to capitalize on the popularity of martial arts first by trying and failing to acquire the rights to adapt the popular David Carradine TV series Kung Fu and then by licensing Fu Manchu. They decided to give him a son, a new hero to take on the notorious villain: Shang-Chi.

The reclamation of Shang-Chi

Meng'er Zhang, Simu Liu and Awkwafina in Shang-Chi and the Legend of the Ten Rings
Marvel Studios

Shang-Chi made his debut in Steve Englehart and Jim Starlin’s Special Marvel Edition no. 15 in 1973 and became the lead in his own comic series, Master of Kung Fu. But the arc relied more heavily on its villain, Fu Manchu, than its hero. It became clear that the character existed to awe white audiences with his martial arts feats, and when Kung Fu fell out of fashion in American culture, so did the character. Marvel discontinued the comic in 1983.

In the last year, Marvel has relaunched the Shang-Chi comic under the stewardship of Eisner-award-winning writer Gene Luen Yang, who has endeavored to, for starters, imbue Shang-Chi with an actual personality.

Similarly, Cretton and his team pitched Marvel Studios a story about family drama that just happened to also feature Kung Fu. They pulled the most compelling aspect of the original Shang-Chi comic—the conflict between father and son—but humanized both the hero and the villain, rather than othering them as the comics had done.

But the movie had to contend not only with a history of racism in the comics, but a history of stereotyping in the Marvel Cinematic Universe itself.

Retconning the Mandarin and the Ten Rings organization

MCU fans may remember the Ten Rings from the very first Marvel Studios movie, Iron Man, as the terrorist organization that kidnaps Tony Stark and goads him into building the very first Iron Man prototype in order to escape. While imprisoned by the Ten Rings, Stark discovers that the group is buying Stark technology off the black market and vows to change his ways. Stark returns to the desert where he was held captive and kills the terrorists responsible, but his ultimate confrontation is with his business partner Obadaiah Stane (Jeff Bridges) who it turns out was selling Stark weapons to terrorists.

The Ten Rings mostly disappear from the MCU after that point—Stark never seems compelled to discover the head of the organization that nearly killed him. In Shang-Chi, we find out that Wenwu is in fact the man in charge of the Ten Rings, an organization that earned its name from his powerful ten rings.

At one point in the movie, Wenwu explains away another MCU misstep, the casting of Ben Kingsley as the villain The Mandarin. The Mandarin made his Marvel comics debut in 1964 as an Asian supervillain and archenemy of Iron Man. The Mandarin loomed large over Iron Man 3. In that film, in videos publicized to the world, a man (played by Kingsley) who calls himself the Mandarin threatens Tony Stark. But when Stark eventually finds and confronts his supposed foe, he discovers that the man is nothing but an actor named Trevor Slattery hired to play a terrorist, a distraction from the true baddie of the film, Aldrich Killian (Guy Pearce), a scientist once spurned by Stark who wants revenge.

In Shang-Chi, Kingsley’s Slattery makes a brief cameo, imprisoned by the Ten Rings organization that he once mocked. Later, Wenwu quickly dismisses Aldrich Killian’s bizarre decision to hire a white man to impersonate Wenwu using an Asian name. “He didn’t know my actual name. He invented a new one,” Wenwu says. “He gave me the name of a chicken dish. It worked. America was afraid of an orange.” 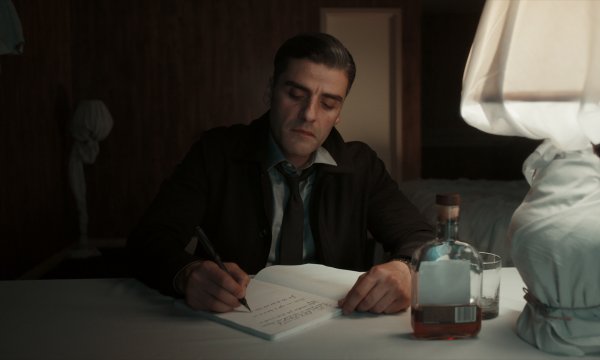 Oscar Isaac Smolders in the Pensive Romantic Thriller The Card Counter
Next Up: Editor's Pick