After a Rushed Exit, the U.S. Vows to Fight Terrorist Threats in Afghanistan from Afar

Soon after the last U.S. plane departed Kabul’s Hamid Karzai International Airport in the pre-dawn hours of Aug. 31, marking the end of America’s longest war, a Taliban spokesman posted a video message hailing “the result of 20 years of our historic sacrifices.”

“We left a historic chapter behind,” said Mohammed Naeem, according to a translation by CBS News. “The coming chapter is important.”

While U.S. officials broadcast the immediate security threats to efforts to evacuate Americans and Afghan allies in the chaotic final days of the war, they have been tight-lipped about what dangers may lie ahead. President Joe Biden defended his decision to pull U.S. troops from the conflict in a defiant address to the nation on Tuesday, noting that the terrorist threat to the U.S. has “metastasized across the world well beyond Afghanistan.” But the violent and harrowing withdrawal was a gift to terrorist groups looking to regroup there, experts say.

The U.S. has left Afghanistan in the hands of the same Taliban militants it overthrew two decades ago, after the group provided safe haven to the al-Qaeda operatives who plotted the 9/11 attacks. Its leaders still maintain close ties to al-Qaeda, and the nascent government being patched together in Kabul is unlikely to be able to contain the resurgence of competing terrorist groups in the region, including Islamic State in Khorasan Province. The group, known as ISKP or ISIS-K, has claimed responsibility for the Aug. 26 airport bombing that killed 13 U.S. service members and an estimated 170 Afghans.

“The vacuum created by the sudden end of the U.S.-led coalition in Afghanistan is going to be far larger than the Taliban can fill,” says Matthew Levitt, director of counterterrorism and intelligence at The Washington Institute for Near East Policy. While there won’t be many American or foreign targets left in the country, for terrorist groups and foreign fighters “it will be an attractive place to flock to as a safe haven, a place to regroup, a place to plot, a place where they can comfortably exist and make plans for the future.”

The Biden Administration has vowed to keep such threats at bay from “over the horizon,” by monitoring the situation and deploying drones out of U.S. bases in Qatar and other Gulf countries. “We will maintain the fight against terrorism in Afghanistan and other countries,” Biden said on Tuesday. “We just don’t need to fight a ground war to do it. To ISIS-K, we aren’t done with you yet.”

But the dismantling of military infrastructure and withdrawal of all U.S. personnel from the country will make that task more difficult, experts and intelligence officials say, with the U.S. military now largely cut off from the human sources on the ground that it has relied on for twenty years. “We’ve had really good eyes and ears on the ground in Afghanistan,” says Colin Clarke, a counterterrorism analyst with security consulting firm Soufan Group. “And we’re still going to have ears…we’re still going to have [signals intelligence] capabilities, but we won’t have eyes.”

But U.S. defense and intelligence officials warn that won’t be enough to stop Afghanistan from once again becoming a hub for emboldened, more technologically savvy terrorist groups seeking to recruit, train, and plot attacks at home and abroad. “The Administration is right that our capabilities are far superior to what they were 20 years ago,” Clarke says. “But technology has been a force multiplier for jihadi groups too. It’s not like it’s the U.S. in 2021 versus al-Qaeda in 2001.”

The members of al-Qaeda left in Afghanistan, who could number up to 600, according to U.N. Security Council estimates, are now likely to have an opportunity to regroup and recruit, capitalizing on the perceived victory of jihad against the most powerful military in the world, analysts say. There have already been recent signs that the organization is ramping up its foreign propaganda operations: in June, al-Qaeda in the Arabian Peninsula recently released its first English-language copy of its “Inspire” magazine in over four years. “Foreign terrorist organizations continue efforts to inspire U.S.-based individuals susceptible to violent extremist influences,” Department of Homeland Security officials said in a bulletin released earlier this month.

This has been further complicated by the Taliban’s release of thousands of prisoners that had been in Afghan government custody, including many senior al-Qaeda operatives and members of ISIS-K, an offshoot of the original Islamic State group in Iraq and Syria. The group, whose leaders were targeted by the U.S.-led coalition in the final years of the war, has re-emerged and is already using the Aug. 26 airport attack in their propaganda material to raise its profile and boost recruitment, intelligence analysts say. ISIS-K has denounced the takeover of the country by the Taliban, which does not conform with its more hard-line version of Islamic rule.

But defense officials and experts say it’s unlikely the Taliban, distracted by the task of governing an impoverished country of 38 million people, will be able to rein them in. ISIS-K carried out 77 attacks in Afghanistan during the first four months of this year, according to U.N. counterterrorism officials, a significant increase from 21 in the same period in 2020. The U.N. security council warned in June of the “alarming expansion” of the group in the region and beyond, especially Africa.

“A precipitous withdrawal could lead to a reconstitution of the terrorist threat to the U.S. homeland within eighteen months to three years,” a group of experts on Afghanistan, including retired Gen. Joseph Dunford, who served as the top commander in Afghanistan before he became the chairman of the Joint Chiefs of Staff in 2015, warned in a report in February.

Biden and his top national security advisers have insisted that the U.S. will conduct effective counter-terrorism measures against these groups the same way they do in other countries where the U.S. does not have a permanent military presence. But former defense officials and experts warn that the sprawling post-9/11 U.S. security apparatus, built to rely on the collection of intelligence in Afghanistan, will become significantly less effective without reliable human intelligence on the ground, proximity or even an embassy, which for now will be operating out of Doha, Qatar.

“There is an expiration date to many of the collection platforms that we’ve been relying on over the past 20 years,” says Levitt of the Washington Institute, referring to Afghan sources and operatives the U.S. has used. “The likelihood that many of those will be disappeared over the coming weeks and months is unfortunately a very real threat.” 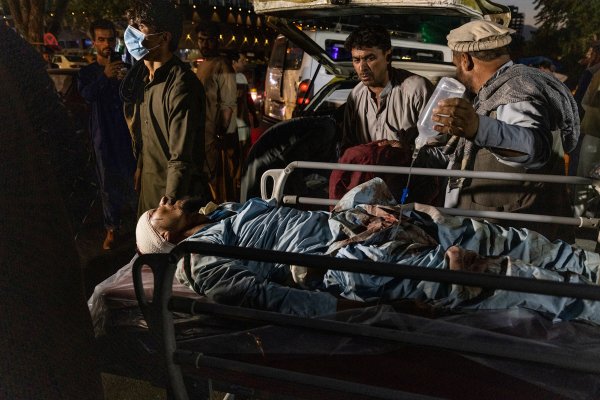 Kabul Bombing Marks a Turning Point in Afghanistan Withdrawal
Next Up: Editor's Pick