Rising Heat Is Making It Harder to Work in the U.S., and the Costs to the Economy Will Soar With Climate Change

Rising extreme heat will make it increasingly hard for workers to do their jobs, shaving hundreds of billions of dollars off the U.S. economy each year. That’s according to a report published Tuesday by the Atlantic Council’s Adrienne Arsht-Rockefeller Foundation Resilience Center, a Washington D.C.-based think tank focused on climate adaptation. It’s a stark warning about the costs of failing to act on climate change.

Productivity losses due to heat currently cost the U.S. an estimated $100 billion a year, the report claims. As days of extreme heat become more frequent in the years ahead, that figure is projected to double to $200 billion by 2030—around 0.5% of GDP. By 2050, annual losses are projected to hit $500 billion, around 1% of GDP. These national losses are expected to come primarily from the southeast and midwest. But the effects will be felt across most of the country, with annual losses of at least 0.5% of economic activity projected for 62% of U.S. counties.

This summer, it’s been hard to ignore that the U.S. is getting hotter. Since June, rolling heat waves have stifled nearly every region, weighing especially hard on western states, nearly all of which have recorded drought conditions. In the last week of August, 60 million people were under heat warnings across the country, with temperatures as high as 115°F in southwestern cities, and humidity making northeastern cities feel close to 100°F. Unusually high temperatures have not only been felt in the U.S.: according to scientists at the National Oceanic and Atmospheric Administration, July was the hottest month on Earth since records began, beating the previous high of July 2016 by 0.02°F.

As greenhouse gases in our atmosphere absorb more heat, the U.S. will experience more frequent and more widespread “high heat days”—defined as a day when the maximum temperature is above 90°F. Drawing on climate projections from the World Climate Research Program, downscaled to county-level, the report estimates that by 2050, up to 30% of the U.S. population will be exposed to more than 100 high heat days per year. That’s up from 5% under the prevailing climate conditions.

Though we may all feel the rising heat on warmer days, its long term consequences for the economy are still poorly understood, says Kathy Baughman McLeod, director of the Adrienne Arsht-Rockefeller Foundation Resilience Center. “It’s hard to isolate heat in economic data,” she says. “Where other climate hazards like hurricanes and floods have an impact on physical assets, heat’s impacts are mostly on the human body.”

On high heat days, studies show people are more likely to feel tired or sick at work, partly as a result of nighttime temperatures remaining too high to get a good night’s sleep. When people are tired, they take more breaks, work more slowly, make more mistakes and have a higher risk of getting injured.

To figure out how those factors affect the U.S. economy as a whole, researchers at consultancy Vivid Economics combined projections for the number of extreme heat days in counties across the U.S., a model on heat-related productivity loss, and government data on the predominance of outdoor work and access to air conditioning across industries. Researchers also included existing models for heat’s impact on ​four crops that are key to U.S. agriculture: corn, soy, wheat and cotton.

The result is only a partial view of heat’s impact on the economy. The analysis leaves out many other ways that heat may impact economic output across the country that were too difficult to measure reliably, including the impact that heat might have on leisure and tourism, the cost of wildfires, and the cost of mechanical failures for machines that stop working at high temperatures.

But even with the limited scope, the $100 billion in current annual heat-related productivity losses outweigh the estimated $60 billion cost of the record-breaking 2020 Atlantic hurricane season. And the annual losses projected in the near future are even worse.

The southeast and the midwest of the country will face the highest economic cost from extreme heat. Texas—the most-affected state due to its climate and relatively high levels of outdoor work— is currently losing an average of $30 billion a year, per the report, and is projected to lose some $110 billion a year by 2050, amounting to 2.5% of its total economic output.

Heat’s impact on work is not distributed equally among the U.S. population. Black and Hispanic workers tend to live in parts of the country that are more exposed to heat, and they face worse working conditions with less protection from heat; in 2020 they lost around 1.3% of their productivity due to heat, compared to a 1.1% loss for non-Hispanic white workers.

But overall losses from heat are projected to be even bigger in the service sector, which dominates the U.S. economy. While those in office jobs are mostly protected from heat by air conditioning, workers in areas like food service or transportation can be exposed to dangerously high temperatures. The sector faces losses of $2.8 billion a year—0.7% of its economic activity—by 2050, per the report.

The study is part of a growing body of research that attempts to put a price tag on the risks the world’s economies face from climate change. The goal, Baughman McLeod says, is to show that doing nothing will cost more than taking action to cut emissions and adapt to climate change. In the case of heat, adaptation will include solutions like creating urban forests, improving early warning systems, and developing heat-resistant strains of crops. “These things require investment,” she says. “But protecting people first rather than paying for it later will, in the end, be the right decision for any business or government.” 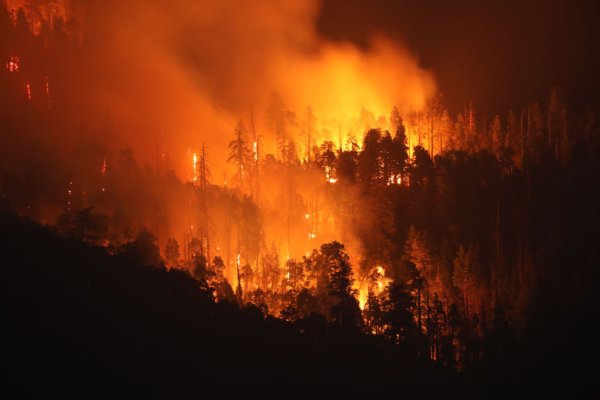 California's Wildfire Problem Could Be Solved by a Few Legal Changes
Next Up: Editor's Pick