When Will COVID-19 Vaccines Be Available for Younger Kids?

As the school year gets underway and the Delta variant continues its march through the U.S. population, many parents with kids younger than 12 have the same question: When will vaccines become available for my child?

No one knows exactly when the U.S. Food and Drug Administration (FDA) may grant one or multiple COVID-19 vaccines emergency-use authorization for children younger than 12. But Dr. Robert Frenck, director of the Vaccine Research Center at Cincinnati Children’s Hospital Medical Center and one of the investigators involved in testing Pfizer-BioNTech’s shot in kids, guesses parents will have to wait at least until October. On Aug. 24, National Institutes of Health Director Dr. Francis Collins said pediatric shots may not be approved before the end of 2021.

That may seem ploddingly slow, given that Pfizer-BioNTech’s shot was authorized for 12- to 15-year-olds back in May. (Moderna submitted its shot for authorization among adolescents and teenagers in June, but the FDA hasn’t issued a decision yet.) But the research process is different for young children, who “are not just little adults,” says Dr. William Towner, physician director of clinical trials for the Kaiser Permanente Department of Research & Evaluation in Southern California.

One major difference: 12- to 15-year-olds received the same vaccine dose as adults, whereas researchers have had to figure out the right amount to give to younger children. With smaller bodies—and immune systems that seem better prepared to fight off COVID-19—young kids should be able to get strong protection from a smaller dose, hopefully with fewer side effects, Frenck explains.

After landing on the right doses for kids, trial sites moved into safety and efficacy testing, starting with children ages 5 to 11 and then moving down to toddlers and babies. That process is ongoing, and it was disrupted when the FDA in late July asked researchers testing both the Pfizer-BioNTech and Moderna vaccines to enroll additional children in their trials, in hopes of learning more about whether rare side effects, like heart conditions seen in a small number of teenagers after vaccination, also affect younger kids.

Both Pfizer and Moderna are still recruiting participants for at least some of their study sites, but reaching that higher enrollment cap shouldn’t be a problem, Towner says. Kaiser Southern California is one of the sites across the country testing Moderna’s vaccine in kids younger than 12—and for each trial spot that opens up, Towner says he receives at least 10 applications from eager parents. “There’s definitely a strong interest in this clinical trial,” Towner says. “We’ve been getting a rather breathtaking response.”

Even still, authorization for 5- to 11-year-olds is likely at least a few months off, Frenck guesses.

Before granting emergency-use authorizations for adult and teen vaccines, the FDA reviewed two months of follow-up safety data from trial participants. It’s likely to want at least that much data from pediatric trials, and perhaps more. An FDA spokesperson referred TIME to agency documents and officials’ previous comments suggesting it will review at least two months of data for kids.

A Pfizer spokesperson said in a statement to TIME that the company expects to have enough data to potentially support an emergency-use authorization for 5- to 11-year-olds by the end of September. Moderna representatives did not provide a statement before press time.

“As a pediatrician, I do feel like using that same rationale that we did for adolescents and adults makes good sense,” Simonsen says. Her Nebraska hospital has already enrolled and vaccinated its 50 pediatric study participants and is now waiting for the FDA’s signal to move ahead. “It’s outside my hands,” Simonsen says. “I’m just anxiously awaiting when the FDA will take that up.”

Many parents can’t wait for that day, as evidenced by the overwhelming response research centers around the country have gotten to their recruitment requests. That anticipation was seemingly only heightened when Pfizer-BioNTech’s shot received full FDA approval in August.

In fact, after that approval, the American Academy of Pediatrics (AAP) issued a statement urging pediatricians not to prescribe the Pfizer shot off-label for children, apparently anticipating the wishes of concerned parents. “We do not want individual physicians to be calculating doses and dosing schedules one-by-one for younger children based on the experience with the vaccine in older patients,” Dr. Yvonne Maldonado, chair of the AAP committee on infectious diseases, said in the statement. “We should do this based on all of the evidence for each age group, and for that we need the trials to be completed. I know parents are anxious to protect their children, but we want to make sure children have the full benefit of ongoing clinical trials.”

Dr. Kelly Moore, president and CEO of the pro-vaccine Immunization Action Coalition, says pediatricians should start counseling parents about the benefits of vaccination as soon as possible, even though shots aren’t authorized for young kids yet. “Families are used to looking to their pediatrician for guidance on what happens to their child,” Moore says. “More than ever, the pediatrician’s ability to educate families is going to be critical.” Schools can play a similar role, particularly for kids who may not have regular interactions with a health care provider, she says. 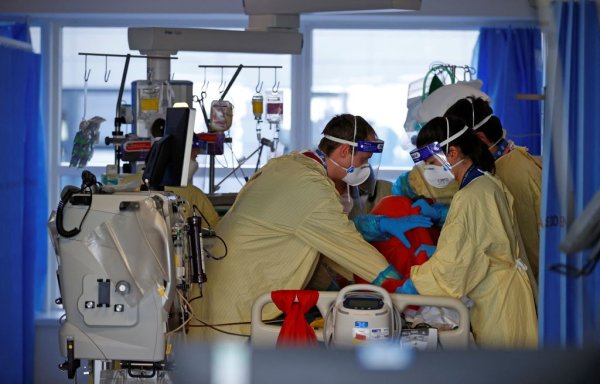 The Delta Variant Increases Your Chances of Being Hospitalized With COVID-19, Study Finds
Next Up: Editor's Pick