As the vague buzzword “metaverse” snowballs into reality, today Facebook unveiled an intriguing peek into its plans for a collaborative online future.

Facebook released a free beta for Horizon Workrooms, a “mixed reality” meeting tool that the tech giant is calling its “flagship collaboration experience.” Seemingly poised to compete with other remote communication platforms like Zoom and Google Meet, Workrooms offers something different: a virtual reality gathering space for business meetings and general productivity, built around the Oculus Quest 2.

But Workrooms is not your ordinary VR chat room.

Workrooms’ goal is to incorporate natural movement and ease of use into your standard work arrangement, then bring that into an environment where you can collaborate with others. Using a companion app for your computer, Workrooms allows users to mirror their desktop or laptop into the virtual workstation; it even tracks some of the most popular keyboards, so they also appear in the space. Basically, you can bring your work set up into the virtual space, allowing you to use your computer almost as you normally would. It’s not too different from the pre-pandemic days of taking your laptop into a meeting room. Except the room is virtual, everyone is a cartoon and the experience is brought to you by Facebook.

All of this is in service to something that an increasing number of companies are calling the “metaverse,” which is basically the under-defined and aspirational next step in online interaction. As we’ve gone from chat rooms to video calls, many companies are scouting new ways of participation and collaboration as the technology evolves.

Mike LeBeau, director of work experiences at Facebook’s Reality Labs, hailed the benefits of what can be accomplished in the space, but he did admit that its full potential has yet to be explored.

Usually, you play and interact with the Oculus Quest 2 with wand-like controllers. Workrooms allows you to put them down, utilizing the headset’s sensors to do some of the most impressive hand tracking that I’ve seen. You can use simple, mostly responsive, hand gestures to join meetings, set up rooms, or call up your computer screen.

Inside the environment, you and others inhabit Workrooms, appearing as cartoon-y avatars that Facebook has integrated into the Oculus ecosystem over the past several years. Avatars, which seem like half the attraction for many VR social spaces, are nothing new. However, in Workrooms along with the hand tracking, the avatar technology comes with surprisingly good lipsyncing. When someone speaks, you can almost read the lips of the avatar.

I took a quick spin through Workrooms alone to set up my account and I found it a tantalizing alternative to the same remote working space/cramped Brooklyn studio I’ve been using for a year and a half. But when I was confronted with other moving avatars at a Facebook-hosted event in Workrooms, I found it intensely jarring at first.

The technology’s ability to sync hand and mouth movements left me feeling like I was in a room of well-manipulated muppets. I caught myself staring at others to admire the rendering, only to realize they could definitely see me gawking, which wouldn’t be very polite–or productive–during a work meeting.

Since the Quest 2 headset is integrated with a microphone, headphones and spatial audio technology, the experience sounds better than most of the video calls we’re having every day. While it has many of the expected glitches that VR usually entails (including hiccups in tracking and occasional avatar deformation), Workrooms, and the prospect of its tech evolving, left me genuinely impressed.

But it comes with many asterisks. To experience the full VR experience of Horizon Workrooms, you and those you wish to collaborate with will need Facebook’s $300 Oculus Quest 2 (not to mention the willingness to wear a headset). To join in VR you will also need a Workrooms account and an Oculus account, the latter of which requires a Facebook account. That’s three accounts to use this at its fullest. After a year of coordination on established platforms like Zoom or Google, those barriers sound to me like a hurdle.

And finally, it’s a beta, and for all the impressive tech involved, there were still plenty of glitches (a person sitting next to me had their avatar’s limbs bending in some pretty unnatural angles). There was also a bare bones look to some of the environments that Facebook is most likely still refining.

It’s possible to use Workrooms, or to join a meeting on it, without a VR headset. Of course, you won’t get the immersive experience but Facebook says its calendar syncs with Google Calendar or Outlook, and you can call in just like a normal video call. And since the Oculus Quest 2 is a stand alone device, there’s no need to combine it with a computer to use Workrooms. Workrooms also features a white board in the virtual space, and in your actual space, that can be a collaborative tool.

You’d be forgiven if you suspect Facebook might also like to distract from many of the recent headlines related to its main product: ya know, that social network called Facebook. Between accusations of letting 2020 election misinformation spread, criticism over a failure to remove COVID-19 misinformation, and continuing to allow extremism and hate speech on the platform, the foundational business has inspired increasing scrutiny in the press and online.

Privacy concerns were top of my mind as I entered Workrooms, particularly as I mirrored my desktop. But Facebook insists that the experience is a secure one.

“Workrooms will not use your work conversations and materials to inform ads on Facebook,” the company said in its release announcing Workrooms. “Facebook and third-party apps do not access, view or use these images or videos to target ads. Finally, other people are not able to see your computer screen in Workrooms unless you choose to share it.”

Horizon Workrooms is a swing, both for the company needing to reinforce its innovative importance, and for a pandemic-weary public looking for new ways to get together. We’ll see if it connects, but I’m interested to see where this tech goes next. 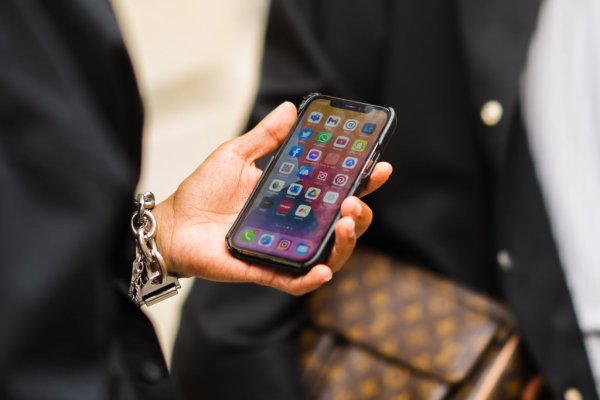 Apple’s New Child Safety Rules: Here's What to Know
Next Up: Editor's Pick