RushTok Is a Mesmerizing Viral Trend. It Also Amplifies Sororities’ Problems With Racism

While what goes into the curation of every TikTok user’s For You page remains a mystery, one thing has become clear—content from University of Alabama students vying for a spot at the school’s sororities has dominated the app over the last week. This trend, dubbed “RushTok” by TikTok netizens, started when sorority hopefuls began making videos of themselves and what they were wearing for “Bama Rush,” University of Alabama’s Greek recruitment week.

The formula for a RushTok video is simple yet mesmerizing: state the rush day and the activity, and then name the brand of every item of clothing and accessory you’re sporting. Typical Bama Rush TikTok videos share common characteristics, including a bevy of blondes with Southern accents, hashtags of the school’s call, “Roll Tide,” and a widespread affinity for brands like Michael Kors, Shein, Steve Madden and Kendra Scott.

Perhaps it should come as no surprise that the videos quickly went viral last week. Featuring primarily thin, homogeneously attractive white women (the TikTok algorithm’s notoriously favored demographic), RushTok provided a peek (or an escape) for users into a niche world filled with parties and promise, following a devastatingly hard year and a world still in a state of chaos. In addition to giving the internet a moment of reprieve, RushTok has also inspired a slew of parody videos, made popular acronyms like PNM (potential new member) and OOTD (outfit of the day), spurred an uptick of rush videos from other schools across the country who are just beginning their recruitment and created a vested interest among viewers in which recruits landed where—a sort of fantasy league for the Bama Rush set.

The obsession with RushTok, however, also serves as a cogent reminder of the longtime critiques of the racism, elitism and sexism embedded in many Greek life organizations. In universities across the U.S., sororities and fraternities have faced reckonings in the wake of hazing violence, sexual assault and even death. In 2020, following the murder of George Floyd, several students and alumni across the nation at multiple schools called for reform when it came to racial discrimination in Greek life, which, as TikTok user Cedoni Francis noted in a viral video, is based on being exclusionary, often along race and class lines. Some former Greek life participants went so far as to leave their fraternities and sororities in protest, while other organizations were disbanded entirely.

The University of Alabama’s sororities’ current viral moment (to date, the hashtag #BamaRush has garnered over 327 million views on TikTok) has also prompted a review of the school’s dark and fairly recent history with racism in Greek life, a harrowing legacy, considering the state’s overall history of brutal racial violence and its status as a site for many pivotal events during the Civil Rights movement.

In 1986, the University of Alabama chapter of Alpha Kappa Alpha, a historically Black Greek organization that Vice President Kamala Harris belonged to as a student at Howard University, which remains the only all-Black sorority on the campus’s sorority row, found a cross burning in the yard of a residence they were considering for a sorority house. As recently as 2013, the school made headlines for formally desegregating its sorority system, after its campus newspaper revealed that Black students were allegedly denied bids from historically white sororities due to alumnae and advisor intervention.

The RushTok trend saw a continuation of the legacy of racist treatment among the university’s Greek life organizations after Makayla Culpepper, a Bama Rush favorite, revealed that she was dropped at the end of rush week from all the sororities that she was rushing. Culpepper, who identifies as mixed race, was visibly one of the only women of color on the platform who became a RushTok sensation, racking up millions of views for her charming OOTD videos. Culpepper was allegedly dropped after a video emerged of her in which she was accused of looking drunk (underage drinking violates recruitment rules); she has since said on TikTok that she was not drunk in the video.

Marissa Lee, who in 2017 became the first Black president of Phi Mu, a prominent sorority at the University of Alabama addressed Culpepper’s drop in a viral TikTok of her own, where she noted that in the past, she witnessed sororities look the other way when damning things were revealed about other (presumably white) recruits.

The controversy surrounding Culpepper’s drop also reignited discourse around the Machine, a coalition that has been an open secret for decades of historically white sororities and fraternities at the University of Alabama that wields influence in both campus- and state-wide politics and is alleged to have been involved with cross-burning, vandalism, burglary, and social ostracism.

To those advocating for real change when it comes to the University of Alabama’s Greek life, RushTok is more than just OOTDs—it offers a chance to re-examine not only its fraught history with race, but also its widespread influence on campus culture. Alexus Cumbie, a University of Alabama graduate student and Alpha Kappa Alpha member, stressed in a RushTok video about Black students and Greek life that reform is necessary precisely because the Greek system on campus is so powerful. In 2020, the University of Alabama had the largest Greek community in the nation for the 10th year in a row; the university reports that its Greek population has more than doubled in size in the last decade, making the need for change even more urgent.

“The truth of the matter is these sororities aren’t going away, so someone has to do the work,” Cumbie says.

Culpepper, however, appears to have moved from campus life sans sorority row. Her RushTok drama garnered her a huge bump in followers across both TikTok and Instagram, which she thanked her fans for in a video captioned “Rejection is God’s protection.” In it, she celebrates hitting 100k followers, just days after she was dropped. In another video, she expresses relief at not getting a bid.

“It’s fine that I didn’t get into a sorority,” she says, smiling. “I’m going to be better off.” 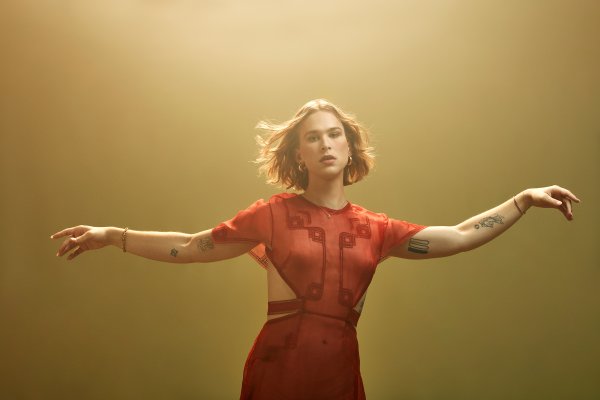 Tommy Dorfman Would Like to Clarify
Next Up: Editor's Pick