After Team USA beat Japan, 90-75, in the women’s Olympic basketball final at the Saitama Super Arena north of Tokyo on Sunday afternoon, clinching a seventh straight Olympic gold medal for the U.S.—and a fifth gold medal for Sue Bird and Diana Taurasi, a new Olympic record for any basketball player—Bird ran over to the stands to kiss and hug her fiancée, U.S. soccer star Megan Rapinoe, who has one gold of her own (from the London Games). Rapinoe, who finagled a media credential to be in the seats, told Bird how proud she was. “That’s some GOAT sh-t right there,” Rapinoe said a few moments later, commenting on the history that Bird and Taurasi, former college teammates at the University of Connecticut, just wrote. (GOAT is an acronym for Greatest Of All-Time).

“Those two,” says Rapinoe, “you can place above everyone.”

Bird, 40, told her fiancée she was very tired and very happy. After all, she and Tarasui, 39, have given the next of the world’s basketball players something to shoot for. “To get five Olympics golds is insane,” says America’s Breanna Stewart, who scored 14 points and grabbed 14 rebounds. “That’s the bar.” (Bird also told Rapinoe their close contact likely violated social distancing regulations in place throughout the Games, which wrapped up on Sunday. “I was like, it’s fine,” says Rapinoe. “I’m the rule breaker in the family.”)

Read more: ‘Unapologetic and Unafraid.’ Sue Bird Stares Down Olympic Glory in Tokyo and Equity Off the Court

Japan played a highly attractive style of basketball, passing, moving, challenging America’s bigger defenders, and occasionally floating in a tough layup, more than a few times getting their shot stuffed (the U.S. finished with 12 blocked shots. Japan had zero). A group of Olympics volunteers sat distanced in the first section behind one basket, a well-earned reward for all they’ve given to these Games. Still, their home-team cheers weren’t enough. Japan kept it relatively close at the half—the U.S. led by 11 at the break—but in the end, the U.S. just had too much size. Brittney Griner finished with 30 points, on 14-18 shooting. “30 piece!” a few teammates yelled as they passed her in a hallway.

Sue Bird #6 and Diana Taurasi #12 of Team USA react in celebration from the bench during the second half of the women's basketball final game between the U.S. and Japan at the Tokyo Olympic games at Saitama Super Arena on Aug. 08, 2021 in Saitama, Japan.
Gregory Shamus—Getty Images

The afternoon, however, belonged to Bird and Taurasi, who periodically swigged champagne at her press conference. ”No water!” she said. The pair first met at UConn in the early 2000s: when Bird was a senior in 2002, Taurasi was a sophomore. “D was annoying because she had such a cocky confidence,” says Bird. “But on the court. we always vibed. Like, from day one.” Tarausi’s the all-time leading scorer in WNBA history; Bird’s the career leader in assists.

During their first Olympics, in Athens, Bird said they were there to learn. And have fun. That team stayed on a cruise ship, the Queen Mary 2; Bird and Taurasi were part of a group of younger players that frequented a nightclub on the ship, G32. “They partied every single night,” Dawn Staley, a leader of that team, told TIME before the Olympics; Staley just coached the U.S. women to gold at the Tokyo Games.

Now, Bird and Taurasi lead the way, Bird more so off the court too. She credits Rapinoe—whom she first at the 2016 Olympics in Rio—for helping her feel more comfortable using her voice. Bird’s family and friends, for example, have long known Bird is gay. But in 2017, Rapinoe convinced Bird to publicly reveal her sexuality. “What Megan helped me understand was that, yes, what I was already doing was great, living authentically,” Bird told TIME in a June interview. “But it was important to say it, because the more people that come out, that’s where you get to the point where nobody has to come out. Where you can just live. And it’s not a story.”

To a degree, Bird’s already helped make that happen. In May Stewart, MVP of last year’s WNBA Finals, announced on social media she was engaged to Marta Xargay, a Spanish basketball pro. “Just seeing the way that Sue has walked the path of life, both on, but more off, the court, it’s something that I aspire to,” Stewart, now a double gold medalist, told TIME. “I didn’t want to have a coming out story. I just wanted to be like, I’m engaged, and I’m happy, and that’s how it should be.”

Stewart’s a member of that next wave of American players who’ve looked up to Bird and Taurasi—and could match their medal haul. While Bird insists she’s played her last Olympics, Taurasi won’t rule out 2024. “I mean, I love Paris,” she says. “Beautiful buildings there, and great fashion. The weather sucks, but oh well.”

Says Taurasi: “Sue’s going to be my plus-one.” 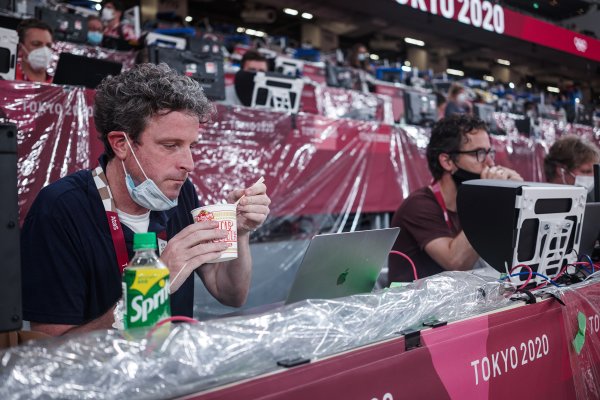 Sleepless Nights, Hotel Room Sprints, So Much 7-Eleven: What It's Like to Cover the Tokyo Olympics
Next Up: Editor's Pick