Richard Trumka Has Died. Few Could Match His Clout in Labor Politics

From his seventh-floor office, Richard Trumka could look out the window and down at the White House just across Lafayette Park. The AFL-CIO chief often made the quick walk across the manicured square and up to the iron security gate on Pennsylvania Avenue. Most of the Secret Service officers there knew him, and Trumka certainly knew his way past them and up the driveway to the West Wing.

Trumka won’t be making those walks any longer. The longtime fixture in union politics died Thursday from an apparent heart attack. He was 72.

When it came to organized labor and its political heft, few could question Trumka’s appetite for a fight or his ability to deliver for his more than 12 million members spread across 50 distinct unions, regardless of which party happened to hold the Oval Office. After all, he showed no reluctance to tell a President he was wrong, whether it was a fellow Democrat or Donald Trump.

In a sign of the clout Trumka wielded and the respect he earned, President Joe Biden, Senate Majority Leader Chuck Schumer and House Speaker Nancy Pelosi each gave tributes to the labor legend whose death shocked Washington. A third-generation coal miner who wore his western Pennsylvania roots proudly, Trumka was a crucial sounding board for Presidents from both parties on trade deals, labor disputes and worker safety, but he never fell for the trappings of Washington. In a city that treats office prestige as a proxy for power, he often invited rank-and-file workers—and journalists—to his sun-filled office as though it were just another break room in a mining town.

Trumka rose to the top job at the AFL-CIO in 2009, just as President Barack Obama was coming to power, but he had been the union’s number-two leader dating to 1995, when Bill Clinton was in his second term. Before that, Trumka led the United Mine Workers, starting in 1982 when Ronald Reagan was just getting his sea legs in Washington. For every major labor victory—and loss—for the last 40 years, Trumka was probably at the table and offering some of the loudest protests against any limits on unions’ rights.

When necessary, Trumka could be brutally effective at managing his members and politicians alike. He knew a lot of his members voted for Trump and thus couldn’t stiff-arm that White House. But he also knew a lot of them liked Biden—and that Biden was ready to give them what they wanted. It’s why Trumka was seen as such a good advocate for the upcoming infrastructure bills that would put a lot of union members to work building roads, bridges and tunnels. Now, Democrats will have to find other surrogates. Few have the credibility and power that Trumka enjoyed.

Inside labor’s sometimes messy family, Trumka was one of the voices that could unify. In 2008, Trumka put his reputation on the line and confronted United Steelworker members at their national convention in Las Vegas. Some were reluctant to support Obama. “There’s only one really, really bad reason to vote against Barack Obama, and that’s because he’s not white. And I want to talk about that issue,” he said. “You want to tell me you won’t vote for him because of the color of his skin? Are you out of your ever-loving mind?”

That’s not to say Trumka spared Obama criticism. Ahead of the 2012 election, he sparred with Obama, whom his union endorsed a second time, for certifying a trade deal with Colombia.

Nor did he spare Hillary Clinton when she ran for president in 2016. The North American Free Trade Agreement (NAFTA) decision that went into effect in 1994 on Bill Clinton’s watch remains irredeemable in many union members’ minds, which is in part why Trumka could put it bluntly 22 years later: either she changed her position on the Trans-Pacific Partnership (TPP), or she risked the AFL-CIO sitting out the election. Clinton, who as Secretary of State backed TPP, wound up saying she didn’t support “this” version of the deal despite stolen transcripts of her previous speech voicing support. Trumka knew he had leverage and he had no qualms about using it. One way or another, he’d be walking across the street from his offices to meet with White House staff in 2017, no matter what color jersey they wore.

Those jerseys ended up being red, not blue. During the Trump years, Trumka had an uneasy relationship with the White House. Early in the first year, Trumka publicly quit a Trump-organized business council that drew few other Democrats and eventually dissolved after Trump defended the pro-Confederate statues protest in Charlottesville, Va.

With Trump hellbent on renegotiating NAFTA, though, Trumka saw a chance to rewrite a measure he and many in organized labor blame for massive job losses. After Trumka helped tweak it to have tougher enforcement of labor rules, Democrats reluctantly agreed to Trump’s proposals and voted for them.

Now, with Biden in power, organized labor has one of its strongest champions in the White House in decades. Whereas Obama and Bill Clinton both said what was necessary, it’s hard to point to big structural wins for labor during their presidencies. Obama prioritized health care over a big labor-rights package in 2009, frustrating union leadership. (Nonetheless, the AFL-CIO in 2010 launched what at the time it billed as an unprecedented political campaign for Democrats.) With NAFTA, Clinton sent millions of manufacturing jobs overseas in the name of free trade, in labor’s telling of this history.

Organized labor’s numbers have been shrinking in recent decades, but their political clout hasn’t seemed to take a corresponding dip. In the last cycle, labor funneled more than $6 million to outside political groups, which mainly supported Democrats, and almost $9 million four years earlier. They’re good for about $5 million a year on lobbying to boost workers’ protections and defend their rights already in place.

But money and power are not always the same thing. Sure, Trumka controlled a ton of union cash to give to politicians—or to use against them. But his credibility came from his narrative as a third-generation miner who legitimately spoke for working-class Americans from his famously mustachioed mouth. The AFL-CIO will continue to be a dominant force in American politics, especially on the left. But there’s no guarantee that the person who moves into Trumka’s prime office will carry the same heft he did, at least not at first. After all, 40 years in the labor movement is a tough qualification to find these days. 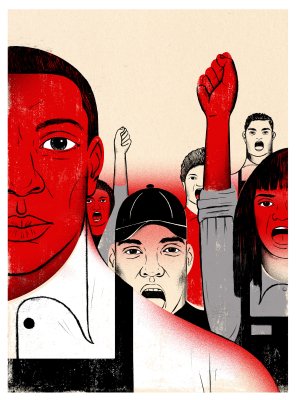 How Hourly Workers Are Securing Better Pay and Benefits
Next Up: Editor's Pick