Photographer Christopher Lee Was at the Capitol on Jan. 6. Here's What It Was Like to Return to the Story for TIME's Mike Fanone Cover

Photograph by Christopher Lee for TIME
By Paul Moakley

On Jan. 6, when insurrectionists determined to interfere with the certification of President Joe Biden’s election victory stormed the U.S. Capitol, Christopher Lee—who was on assignment for TIME—was one of a small handful of photojournalists to find their way inside. Lee has covered conflicts in the Middle East and central Asia, but, when he spoke to TIME after that day, he said it felt like one of the most dangerous moments of his career.

Inside the Capitol, he says, a group of insurrectionists pulled down his N95 mask, called him part of the “fake news” media and chased him down a hallway. But when he returned home to Texas, the Trump flags still waved calmly in his neighborhood.

“Home is a place where you’re supposed to feel safe,” he says. “Overseas I had the privilege to leave the space… but here these dangers could follow me back home.”

Lee began to feel sick in the days that followed, and tested positive for COVID-19. In isolation, he began to process the trauma he had endured—and the additional weight of feeling alone in his experience. Anger soon joined the sadness he felt about being stuck at home, rather than out working. Lee says he was diagnosed this year with PTSD, though therapy has since restored the “compass” he lost. “I’m not going to blame it all on January 6, but that was the straw that broke that camel’s back for me,” he says. “I’ve always compartmentalized trauma from this job.”

And though what happened on Jan. 6 was shocking, he says, in some ways the “whitewashing” was even worse. Listening to politicians and others downplay the seriousness of what he had experienced made him wonder whether he could really trust his own memories.

“When I met Mike,” Lee recalls, “I [realized] we share this sense of being gaslit. People were saying, ‘You didn’t see what you saw. You didn’t feel what you felt.’”

The morning Lee went to meet Fanone, on the day the officer testified before the House Select Committee about what he experienced, was the first time Lee had seen the Capitol since the insurrection. “It was bright and sunny. The lawn was immaculate. The building didn’t have people climbing all over it. There were no broken barriers, and none of the windows were broken. It felt as if they built a new Capitol,” he says.

On this assignment, Lee says, “I felt a lot of pressure to get it right. I’m given the opportunity to photograph someone whose life had changed from that day, who almost died. But at a certain point, I know it’s not about me but this other person. I kept wondering, Is this guy feeling the way I am? And it turns out he was, from our conversations.”

The photoshoot for the cover image that accompanies Molly Ball’s profile of Fanone took place outside the Capitol, nearly a week after Fanone’s emotional testimony before Congress made national news, and days after the suicide of Fanone’s fellow officer Gunther Hashida. “Everywhere we went, civilians, police officers, and so many strangers were coming up to him and thanking him,” Lee says. “He said there’s support—but he hesitated and said people are still calling in death threats. I thought about how that has to mess with you.”

In the photograph, Fanone stands at dawn before his own looming shadow. He is an officer in uniform, someone who bravely ran to help his colleagues. But his uniform is also why he was attacked.

“I tried to show those conflicting feelings in the portrait,” Lee says. “With every ‘thank you’ that he gets, it’s being followed by a death threat. I wanted to show that eternal fight in his expression.” 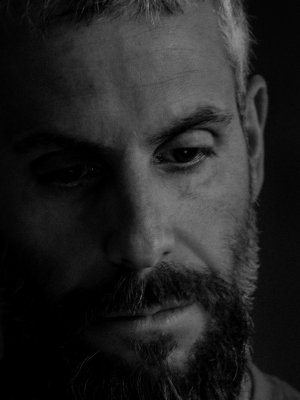 What Mike Fanone Can't Forget
Next Up: Editor's Pick