She Helped New York Through the Worst of the Pandemic. Then the Nightmare Followed Her Home

Sixteen months ago, at the height of the COVID-19 pandemic in New York City, Dr. Rebecca Martin was one of thousands of out-of-state doctors and nurses who came to help the city battle what was then a new disease. That spring, the pulmonologist from Arkansas spoke to TIME about her 96-hour stint at Wyckoff Heights Medical Center in Brooklyn. Martin, 45, wondered at the time how her own hospital, Baxter Regional Medical Center in northern Arkansas, would handle COVID-19 if it arrived. She got her answer this July, when rising infections turned the state into one of the worst virus hotspots in the nation.

When I flew to New York City at the height of the pandemic in April 2020, it was my first time practicing medicine outside of my home state of Arkansas. Before I left to battle a strange disease in the epicenter of the U.S. outbreak, I said goodbye to my husband and four young children, making sure to leave them the passwords to our family’s financial accounts in case I didn’t come back. As a pulmonologist, I suddenly had one of the nation’s most important occupations. And I couldn’t sit around, watching COVID-19 kill more and more people, while my fellow medical workers begged for help.

During the 10 days I spent volunteering at Wyckoff, patients were packed so tightly in the emergency room that it was hard to pass between gurneys. There weren’t enough sedatives to go around, so patients would sometimes wake up prematurely and pull the breathing tubes out of their throats. The scene was beyond my worst expectation.

I never thought that nightmare would follow me home. But today, our intensive care unit in northern Arkansas is flooded with mostly unvaccinated and young patients on ventilators. Several nurses have quit or retired early, leaving an overwhelmed staff to deal with the constant barrage of patients. Stretchers line the hallways. We had to create a mini ICU in another wing of the hospital to deal with the influx. In the chaos, sometimes we don’t know which patient is in which room. Sometimes we send patients home and they come back sicker the next day. More than a year later, people dying of COVID-19 are back to saying goodbye to their loved ones through iPads, while isolated in dark rooms.

It’s hard to be back here. For months, as COVID-19 cases dwindled and vaccinations ramped up nationwide, there was hope that the pandemic could end. We thought we made it through the hard part. We began to get comfortable. We started patting ourselves on the back, thinking, “Yeah, we did it!” It was a false sense of security. I remember the day. It was a Tuesday in June, and I had nine new COVID-19 consults in one day. I thought, ‘My gosh. I haven’t seen this in months. What’s going on?” I thought it might have been a fluke. It wasn’t. By mid-July, the hospital re-opened its COVID-19 ward. There are ten times more cases than there were a month ago, largely due to the Delta variant and low vaccination rates in the state.

It’s frustrating and exhausting, because this time, it’s preventable. It’s free and quick to get vaccinated. I’d like to say that I don’t harbor resentment toward those still unwilling to get the shots, but I do. I really wish they would reconsider. I wish they would think about all of the people around them and not just themselves. Now we’re back to asking, how long is this going to last? Is there just going to be another one with a different strain? Is this the new normal?

It feels like it should be over. But here it is in Arkansas, worse than it ever was to start with and we’re doing less to combat its spread than we did before.

—As told to Melissa Chan 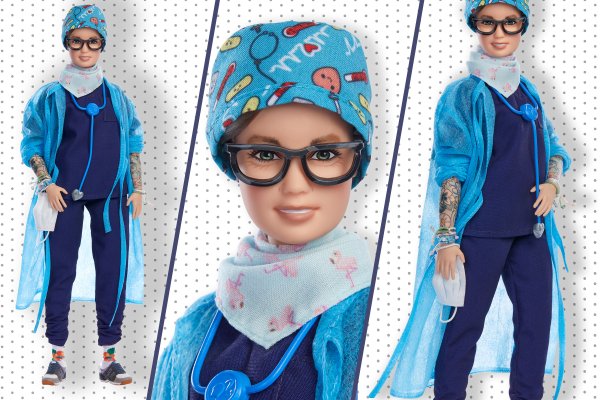 Mattel Has Created a Line of Dolls Honoring Frontline Workers, Including Nurse Amy O'Sullivan Who Appeared on the Cover of TIME
Next Up: Editor's Pick