A beneficiary poses for a photo after getting vaccinated with a dose of Russia's Sputnik V Covid-19 vaccine at a vaccination centre, on July 13, 2021 in Mumbai, India.
Satish Bate-Hindustan Times
Ideas
By Ian Bremmer
Bremmer is a foreign affairs columnist and editor-at-large at TIME. He is the president of Eurasia Group, a political-risk consultancy, and GZERO Media, a company dedicated to providing intelligent and engaging coverage of international affairs. He teaches applied geopolitics at Columbia University’s School of International and Public Affairs and his most recent book is Us vs. Them: The Failure of Globalism.

China and Russia both thought the pandemic would give them a chance to show that they are scientifically innovative—and more generous—than Western countries, which were slower to roll out vaccines and which have been accused of hoarding supplies.

It hasn’t worked out.

China’s president Xi Jinping referred to Chinese vaccines as a “global public good.” China’s Sinovac vaccine also offers developing countries some important advantages that the Moderna and Pfizer-BioNTech vaccines can’t match. Sinovac can be stored in a standard refrigerator. The Moderna vaccine must be stored at -20°C and the Pfizer vaccine at -70°C, an obstacle in countries where health infrastructure is lacking. That’s part of why China’s vaccines have been injected into arms in more than 80 countries across the developing world.

The trouble is that, when compared with these other vaccines, China’s jabs just aren’t very effective. The Pfizer-BioNTech and Moderna mRNA vaccines have efficacy rates of more than 90%. The World Health Organization noted in June that the Sinovac vaccine “prevented symptomatic disease in 51% of those vaccinated and prevented severe Covid-19 and hospitalization in 100% of the studied population,” though it acknowledged that few adults over age 60 took part in the trials, , potentially skewing the numbers by with a sample population that’s less vulnerable that the public at large. Data for the Chinese-made Sinopharm vaccine demonstrated a “vaccine efficacy [rate] for symptomatic and hospitalized disease” at 79%—though here too patients over 60 were underrepresented.

Crucially, these studies tested vaccines only against the version of COVID-19 virus that emerged in late 2019 from the city of Wuhan. They provided no data on effectiveness against variants, including the Delta variant, which is becoming the dominant strain of SARS-CoV-2 in many countries, including the U.S. In many of the places where Sinopharm and Sinovac are in use, there has been a sharp spike in the number of COVID-19 infections in recent weeks.

Russia’s Sputnik V vaccine, now in use in nearly 70 countries, has recently been found to be “safe and effective” in international studies, but it remains controversial for other reasons. Not only was Sputnik the world’s first vaccine authorized for use in any country—the Russian Health Ministry okayed it in August 2020, more than a month before its Phase 1 and 2 trial results were published, and before its Phase 3 trial had even begun. Questions about the credibility of Russian government assurances immediately became suspect. Indeed, both the WHO and European Medicines Agency have yet to authorize Sputnik V for emergency use, due to a lack of access to raw data from the trials, and concerns over rare side effects. But countries like India, South Korea, Argentina, Hungary, Iran and many others which lack more transparent alternatives have proven willing to take the risk. COVID-ravaged India, for example, plans to eventually manufacture at least 850 million doses of Sputnik V per year.

But beyond questions of efficacy, the Russian rollout of Sputnik has faced a series of embarrassing problems. In April, Brazilian regulators rejected Sputnik as potentially dangerous before reversing the decision in June—when COVID-19 infections were soaring across the country—and allowing a small number of doses at a time into the country. Slovak officials said in April that the Sputnik doses it received from Russia did “not have the same characteristics and properties” as Sputnik doses provided by Russia for evaluation in international studies. Indian officials say delayed supplies from Russia have put big production plans there on hold. The Moscow Times reported earlier this month that “Russia has awarded an Emirati royal the exclusive rights to sell its Sputnik V coronavirus vaccine to a host of countries in at least three continents in a deal that has seen buyers paying huge premiums for supplies.”

Put it all together, and it’s easy to see why Russia’s claim that 800 million people worldwide will be vaccinated with Sputnik by the end of 2021 is farcical. Because of delays that have hampered production of Sputnik in other countries, many of the Sputnik doses administered abroad have come directly from Russia, which sharply limits the number than can be manufactured globally. In May, the Russian edition of Forbes reported that some 16.3 million doses of a two-dose vaccine had been exported. That’s just a bit better than 1% of the target Russia set for global Sputnik vaccinations.

But the best tests of the Russian government’s (lack of) credibility comes directly from the Russian people. A poll conducted in March found that a startling 62% of Russians surveyed didn’t want to be vaccinated. As of June 28, just 15% of Russians had received at least one dose of a vaccine that has been authorized inside Russia for nearly a year. This in a country that is breaking records for daily deaths from COVID-19.

Chinese and Russian vaccines won’t win those countries the geopolitical victories they hoped for. A huge missed opportunity for Moscow and Beijing.

A remarkably clear explanation in six minutes from an expert on variants and vaccines. The takeaway: Pfizer-BioNTech and Moderna mRNA vaccines are clearly most effective against the Delta variant, but the Chinese or Russian vaccines are still much better than nothing. 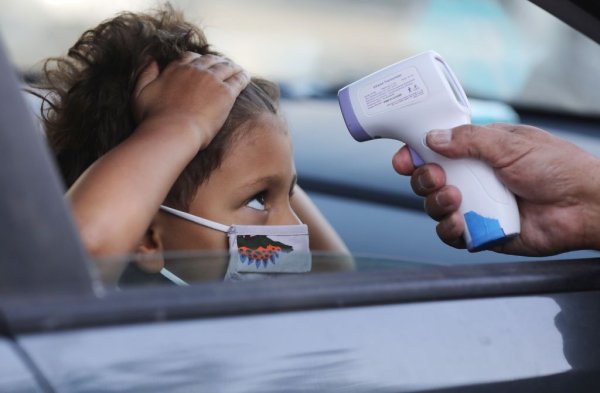 How Will Delta Change Back-to-School Season?
Next Up: Editor's Pick