In a combo of frame grabs taken from Russian television, five snowflakes float together in Fisht Stadium during the opening ceremony of the 2014 Winter Olympics in Sochi, Russia, Friday, Feb. 7, 2014
AP
By Eliana Dockterman

The five rings were supposed to join together and then turn into fireworks. But one of the snowflakes never transformed into a ring, and the pyrotechnics never happened. Russian state television cut away to rehearsal footage when the fifth ring got stuck, according to producers of the show.

The producers maintain that it was critical to preserve the Olympic ring imagery, even if it meant showing fake footage. Russian President Vladimir Putin has repeatedly emphasized the importance of showcasing Russia flawlessly to the world during the Olympics.

NBC, which is airing the Opening Ceremonies later tonight, said in a statement, “We will show things as they happened tonight.” And it stuck to its promise by showing the glitch, which barely marred an otherwise spectacular opening ceremony. 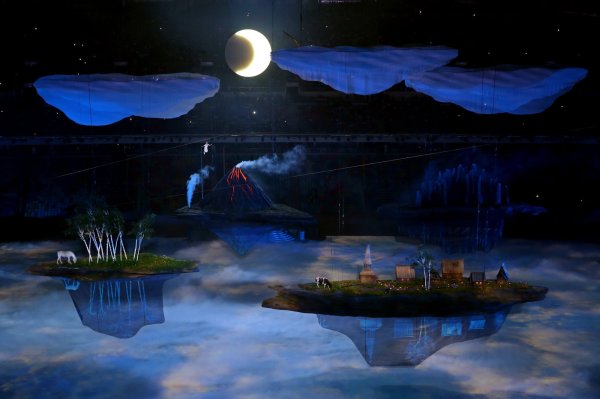 See Photos of the Opening Ceremony Before You Can See Them on TV
Next Up: Editor's Pick