The day before a moratorium on evictions is set to expire, President Joe Biden faces criticism from some of his allies for his hasty effort to preserve it—and for not acting sooner to prevent what they view as an imminent housing crisis.

Biden asked Congress on Thursday to act swiftly to extend the ban on evictions, set to expire on Saturday. But Democratic lawmakers are divided on how much longer the moratorium should remain in place, and it isn’t clear whether there’s much Republican support for any extension.

White House aides have long been aware that the moratorium would expire on July 31. But the administration was caught off guard by the recent surge in Covid-19 cases fueled by the delta variant, said a senior White House official. The pandemic’s turn for the worse—combined with the slow dispersal of federal emergency rental assistance money in states and cities—has lent sudden urgency to the plight of Americans struggling to stay in their homes.

An estimated 3.6 million households who’ve fallen behind on their payments are somewhat or very likely to face eviction over the next two months, should the moratorium expire. About 7.4 million households are behind on rent in total, according to the latest Census Bureau survey.

After a previous moratorium expired July 24, 2020, evictions surged above historic levels — in some communities, to the tune of 495%, said Emily Benfer, a research partner with the Eviction Lab at Princeton University. An administrative moratorium imposed by the U.S. Centers for Disease Control and Prevention cut filings by about half, she said.

It’s a political dilemma for Biden because on the other side of the issue, there are many small landlords who have struggled financially after the government essentially allowed their tenants to stop paying rent. A $47 billion federal program to provide emergency rent relief had disbursed money to just 635,000 households by the end of June.

“What they have done, and what this is, is reckless and irresponsible,” Representative Alexandria Ocasio-Cortez, a New York Democrat and progressive leader, said in an interview. “And so now we’re scrambling—but it could have been avoided with better communication and, frankly, more forthright leadership from the White House.”

Ocasio-Cortez said evictions should be prevented through the end of the year. But Senator Mark Warner, a Virginia Democrat regarded as a centrist, said “a short-term extension makes sense, but we do have to return to the market.”

The administration’s reluctance to more aggressively pursue an extension of the moratorium was rooted in part in a June Supreme Court order that limited the CDC’s authority to keep it in place.

Justice Brett Kavanaugh joined a 5-4 majority in denying a request from landlords and real-estate trade associations to block the moratorium. But he wrote that he thought the CDC had exceeded its power in imposing its ban, and that he would require congressional authorization beyond July 31 to extend it.

The senior White House official said Biden’s aides were concerned that if they tested the Supreme Court by asking the CDC to extend the moratorium despite Kavanaugh’s opinion, the court’s conservative majority might respond by more broadly limiting the agency’s power.

The White House has instead tried to prepare for the end of the moratorium. In a July 21 meeting, the White House’s coordinator for Biden’s pandemic relief program, Gene Sperling, said the administration was committed to doing “everything it can to make sure cities and states provide relief to renters and landlords,” the White House said in a statement on the event, which had more than 2,000 participants from across the country.

But liberal advocates for affordable housing are dismayed.

“I just want to see some boldness to protect the people who elected him president and that’s not what I am seeing at all,” said Sophia Lopez, deputy campaign director at Action Center on Race and the Economy, a left-leaning group. “We are all disappointed and grappling with what this means for all of the millions of people,” she said of the eviction moratorium’s imminent expiration.

The White House’s inaction leaves the issue in the hands of Congress. Senator Sherrod Brown of Ohio, the chairman of the Senate Banking Committee, said lawmakers are “trying to explore all options to get this extended.”

Kavanaugh’s position, he said, “makes it really hard for the administration to move unilaterally. I’m hoping Congress, we can figure out a way forward.”

The end of the moratorium will look different from state to state. Some states, such as New York and California, and cities have their own eviction bans in place. And different jurisdictions have different rules for filing eviction notices, so the pace will vary.

In Houston, for example, there are likely to be filings in court as early as Monday. Landlords in Boston, on the other hand, have to give tenants a 14-day notice, said Peter Hepburn, an assistant professor of sociology at Rutgers and research fellow at the Eviction Lab.

Additionally complicating the situation—for both tenants and landlords—is the slow dispersal of federal emergency rental assistance. Only about 12% of the $47 billion has been distributed so far.

“The most important thing is to continue to get this money out the door to pay people’s back rent and to pay these landlords that have not gotten paid for months,” Brown said.

The money has been distributed by the Treasury Department, rather than the Department of Housing and Urban Development, and states and cities have then had to create systems to pass it on to landlords.

Those efforts have been uneven. An Urban Institute survey found that more than half of renters and 40% of mom-and-pop landlords were unaware the rental assistance even exists.

—With assistance from Jennifer Epstein. 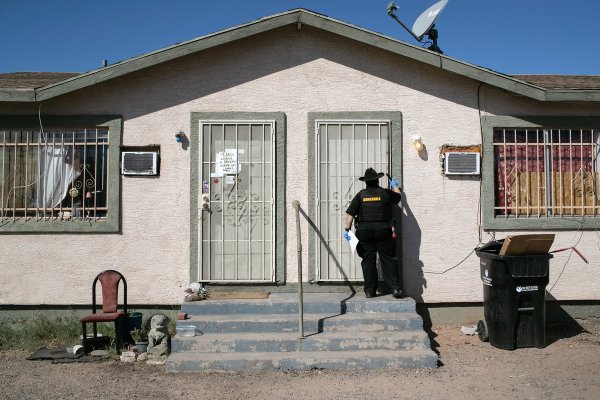 Inside the Quest to Distribute Billions in Rental Assistance Before Eviction Moratoriums Expire
Next Up: Editor's Pick