'I Will Cry When I Deliver That Last Yogurt.' Small Ranch Owners Are Selling Their Herds for Lack of Water

Limited irrigation water this spring in the West has put pressure on operations like those at VanWinkle Ranch.
Courtesy Janie VanWinkle
By Raisa Bruner

Gail Ansley delivered her final batch of homemade Picabo Desert Farm goat yogurt to Atkinson’s Market in Hailey, ID two weeks ago. As usual, each 16-oz unit of rich, creamy goat’s milk yogurt was packaged in a plain plastic container with a simple disclaimer stuck to the lid: “We know this label isn’t Chic, but the Yogurt inside is the best you’ll Eat!” it proudly proclaims. The ingredients: raw goat milk, culture, and sometimes gourmet vanilla bean paste sourced from nearby Boise, or fresh lemon curd, or peach jam. But this chapter is all over: she sold her last goat, a Nigerian dwarf named Kea, the weekend before. Kea was the final remaining animal in Ansley’s hundred-plus goat herd, which she grew and raised over the past six years on her small farm in Richfield, ID. “And I will cry when I deliver that last yogurt tomorrow,” Ansley says over the phone, audibly tearing up. “When we started, my husband had a pickup truck and a camper, that’s what we lived in. And I had the clothes that I had, and that was it. To be able to get to this point— to afford a farm…” she trails off, because even though she had achieved her dream, what comes next is unclear.

Ansley is not alone among ranchers in the region struggling to keep up a livestock business this year. The biggest challenge for many: water. All across the West, residents are facing down a summer of severe drought and heat. (Idaho is already in the midst of its worst drought conditions in over a decade, with nearly a third of the state classified by the U.S. Drought Monitor as “extreme drought” and 84% in “severe drought.”) Rivers in states throughout the area—the Snake, the Big Lost, the Colorado—are low; groundwater resources are, too. Reservoirs are below capacity. Water access is restricted. And the downstream effect is being felt keenly by ranches like Picabo that simply can’t afford to keep their animals any longer and are now fighting to maintain profitability.

Idaho’s Magic Valley, where Picabo Desert Farm is located, only received 27 days of water from their designated canal access in the past year. (In a normal year, that number would be about 140.) Farmers in the valley only harvested one crop of hay, the primary feed source for livestock like cattle and goats, instead of the usual three. The result: an increase in feed prices for animals. For Ansley, who grows her own hay, it has meant cutting back on other expenses to keep the goats alive—until now, when a mix of the encroaching environmental pressures and a pileup of personal challenges (a death in the family, her and her husband’s ongoing health concerns, and a lack of available local employees) have made it too difficult to go on. “Water is crucial,” she says. “You really don’t have a farm if you don’t have water. I wouldn’t have been able to buy hay to raise my girls for the year.”

Chèvre draining at Picabo Desert Farm. Gail Ansley used to sell six figures of yogurt and cheese; this year, she sold all of her goats and shut down the business.
Courtesy of Gail Ansley

It wasn’t always this way for Ansley. In 2020 she sold $160,000 worth of product, she tells TIME; she’s been profitable every year of the business. Just the week before, a representative from an Idaho co-op reached out to stock her yogurts. But she had to turn him down, to his surprise, and to her own frustration: “This is the best thing I’ve ever done,” she says, even if she can’t continue it. Her husband brought what remained of her herd this summer to the nearby city of Twin Falls earlier in July for the weekly livestock auction, where her girls, as she calls them, sold for about $160 a head. (Ansley bought her first 20 goats in 2006 for about $500 a head.) For now, the couple and their teenaged granddaughter are planning to survive on Ansley’s husband’s disability payments, which he receives because of a brain tumor diagnosis.

Over at VanWinkle Ranch in Fruita, Colorado, owner and operator Janie VanWinkle is facing a similar crisis, although she at least hopes to outlast the drought—this time. “You know, we’re kind of an optimistic bunch, or we wouldn’t be in this business,” VanWinkle says of her cohort of cattlemen in western Colorado, where she is a fourth-generation rancher with her husband; her son, recently graduated from college and returned home to continue the business, will be the fifth. “But it makes it really hard to look to the future optimistically, with the drought staring you in the face with every step you take.” The Van Winkles have been slowly selling off cattle every season over the past year to ground beef processing plants, whittling down their herd of 550 in order to stay sustainable; they’re down about 100 cows from last fall, and will sell off another 50 or more in the coming months. With their own hay production about 60% of normal, they have secured extra hay from Kansas and will be trucking it in over the coming weeks, outsourcing their feed for the first time.

TBone and Kip the cow dogs cool off in a nearly-dry pond after looking for cattle, with Dean and Howard VanWinkle looking on.
Courtesy Janie VanWinkle

Van Winkle and her husband are not new to dealing with drought downturns: they had to sell half their cattle during a bad season in 2002. But with consistent drought conditions present for three of the last four years, the accumulated effects—soil depletion chief among them—are adding up. “Is it the worst year ever? It feels like it,” she says. “I do think we’ll see some producers sell all their cattle, and then whether they’ll get back in or not, that remains to be seen.” About half of the U.S.’s cattle are on small ranches of under 40 cows, and it is these smaller operations that are most at risk now. “It’s still an important part of the food supply and for the security of our food system,” Van Winkle says. Longer term, ranchers like her are considering alternatives: “We know that our business and our lifestyle will look different in 10 years, in 20 years,” she says. “But the drought is only a piece of that.” VanWinkle and other ranchers are already looking to expand their options for the future, including boosting their direct-to-consumer sales channels and opening up their land to outdoor recreation companies.

The Ansleys and the Van Winkles are just two families facing the drought’s immediate impacts. “Whenever you meet somebody on the road, you roll down your window and you put your arm out, the first thing that always comes up is: It’s a dry son of a gun, isn’t it? That’s the conversation,” Van Winkle says. “A lot of headshaking, a lot of frustration, but we know this when we sign on to this business. It’s not for the faint of heart.” The winds of change, as she puts it, have been blowing for a while now: the future is in outdoor recreation, tourism and alternative income streams. This might just speed up the transition. “Everything,” as Idaho’s Ansley says, “is a domino effect.” And the fire season is just beginning. 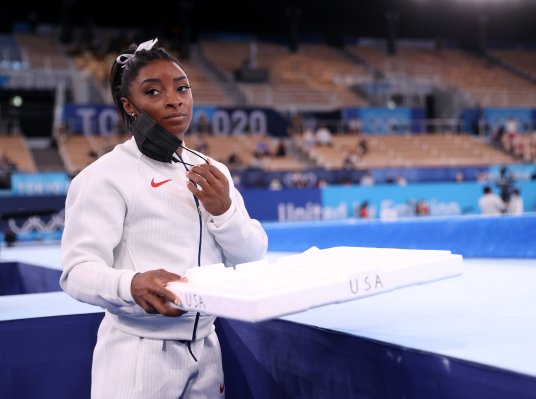 Sponsor Gap Backs Simone Biles' Decision to Pull Out of Competition at Olympics
Next Up: Editor's Pick