“I hope that any young LGBT person out there can see that no matter how alone you feel right now, you are not alone,” said Daley, 27. “You can achieve anything and there is a whole lot of your chosen family out here, ready to support you.”

Daley delivered his speech at a table flanked by his Chinese and Russian competitors, who respectively took silver and bronze medals, meaning that media in both countries—neither of which allow same sex marriage—were broadcasting his words. Daley has previously said that he avoided taking part in a competition in Russia shortly after coming out because he felt unsafe given the prevalence of homophobia and a raft of anti-LGBTQ legislation in the country.

Daley came out as gay in 2013, and is one of at least 142 out LGBTQ athletes competing at the Tokyo 2020 Olympics—the highest number on record, according to NGO GLAAD. In 2017 he married Dustin Lance Black, an American screenwriter and filmmaker who won an Academy Award in 2008 for his original screenplay for Milk, a biopic of politician and gay rights activist Harvey Milk. The couple’s first child was born in 2018.

Daley has now competed at four Olympics, starting with Beijing in 2008. In 2009 he won gold at the individual men’s 10m platform event at the world diving championships. He also won bronze medals at the 2012 and 2016 Olympics, but this is his first time reaching the top of the podium at the games. 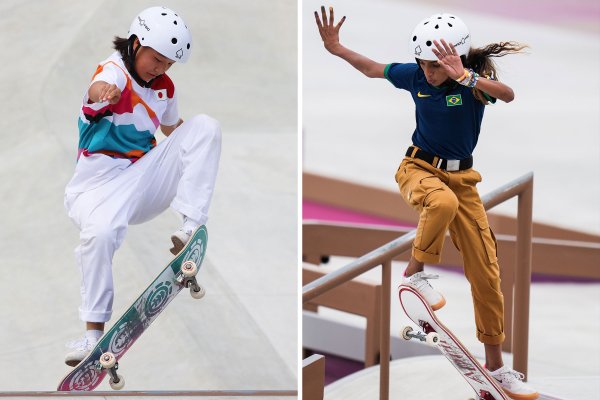 Tokyo’s Newest Stars Are 2 13-Year-Old Skaters
Next Up: Editor's Pick