Once Friends, Now Rivals: The Iranian Athletes Facing Off Under Different Flags at the 2020 Tokyo Games

The Olympic games in Tokyo will host the largest number of Iranian athletes since the 1979 Islamic Revolution; but one hopeful world champion is faced with the harsh reality of competing against a friend and former teammate from back home.

Sixty six Iranian nationals are set to compete in 16 fields and hail the flag of their homeland, but this year they’re not the only Iranians eyeing the podium. For the first time in history, four Iranian athletes are competing under the International Olympic Committee’s refugee team (IOC). After the Olympians from war-ravaged South Sudan, Iranians make up the second highest number of athletes from a single country carrying the white flag.

Among the defected trailblazers is female Taekwondo star and 2016 Olympic medalist Kimia Alizadeh. On Sunday, she is set to compete against her long-time friend Nahid Kiyani of Iran in their first match in Japan. “Can you imagine the mental scrutiny that these young women have to endure?” said an Iranian Taekwondo coach who requested anonymity as he still coaches in Iran. “No athlete deserves this level of pressure.”

Five years ago, Alizadeh made history after winning the bronze for her country in Rio; but in January 2020, in a heartfelt Instagram post she announced her departure from Iran. Lies, deception, corruption, and manipulation by officials were among the host of challenges she alleged in her post—reflecting on the draining experience of competing in Iran’s sports world.

The coach also spoke of the many obstacles he faced in doing his job. Male coaches in Iran are technically banned from training female athletes and traveling with them to tournaments, and nor are they allowed to watch their games at home. “They take away the all-female attendees’ phones and cameras in the tournaments and none of the matches are broadcasted at home — so I’ve never seen any of my female student’s games. Can you imagine? Then how can I help them?”

Over the past few years Iran has lost over a dozen of its superstars, young sportsmen and women who have taken refuge around the world. Some have been granted citizenship by countries like Azerbaijan and Mongolia, while others continue to live as refugees awaiting their residency in Europe and Canada. Alizadeh, her fellow fighter Dina Pouryounes, canoeist Saeid Fazoula and karateka Hamoon Derafshipur have been granted spots on the IOC refugee team. The latter, the 2018 world karate champion, left Iran for Canada after his request that his wife, the former captain of Iran’s national karate team, be his coach was declined.

Internal pressure, lack of transparency, widespread mismanagement and corruption by officials, and a fundamental disregard for sports by higher-ups are among the key challenges that continue to dishearten and choke athletes in the Islamic Republic of Iran. Additionally, athletes only get paid when they compete or during the formal camps, which requires them to take on additional employment to make ends meet.

After leaving, many describe the stark contrast they find in their new countries. “The value, respect, and financial stability I receive here is incredible,” explains Neda Rezaei, a former member of Iran’s national Karate team. In 2017 she was granted citizenship by Azerbaijan, and now competes under their flag. “Spending money on athletes, supporting them, and celebrating their smallest achievements is a huge investment for any country; but unfortunately Iran doesn’t recognize this investment.”

To address these and other allegations, TIME attempted to speak to the Vice President of Women’s Affairs as well Iran’s Vice President and Executive Board Member of the National Olympic Committee, but neither were available to comment.

Other athletes aren’t even permitted to participate in their chosen sport. Sadaf Khadem had ambitions to be the Islamic Republic’s first ever female boxer, but was unable to train or compete in Iran as the sport is only permitted for male athletes. She left her home country a year before the COVID-19 pandemic and won her first ever boxing match in Royan against her French counterpart Anne Chauvin. “I remember telling my coach in Tehran that my hand will one day be raised as the first Iranian woman who won a boxing match. He laughed at me back then; but I did it. No one should ever be prevented from reaching their goals—their dreams.” Khadem is in the process of securing her French residency and hopes to compete in the 2024 Olympic games to be hosted in Paris.

Not every athlete who chooses to leave Iran to pursue opportunities abroad abandons their home country. Naghmeh Khanjani, a 26-year-old equestrian who is not competing at Tokyo, for years lived and studied in the Czech Republic yet decided a couple of years ago to return home to continue her riding career in Iran with the sole support of her family. She says that in 2006, when she was aged only 11, she refused an offer from the UAE to compete as an Emirati. “It was a dream for any young girl; but I would never give up my country’s name for another flag.”

Even she acknowledges the petty challenges that hurt female athletes in her country. “I can say with full confidence that our athletes have so much talent, so much potential, so much star power that if only recognized and fostered can shine on every international podium. What you see achieved so far by Iranian athletes is strictly the result of their own personal vigor and resilience; imagine what they can do if they’re supported by the federations and the leadership.”

Thinking about the match on Sunday between Alizadeh and Kiyani, Khanjani expresses a youthful remorse. “It’s truly sad to see them against one another at a time when they could both shine for their own land; but everyone has a limit — Kimia reached hers and was fed up — she couldn’t take it anymore.” 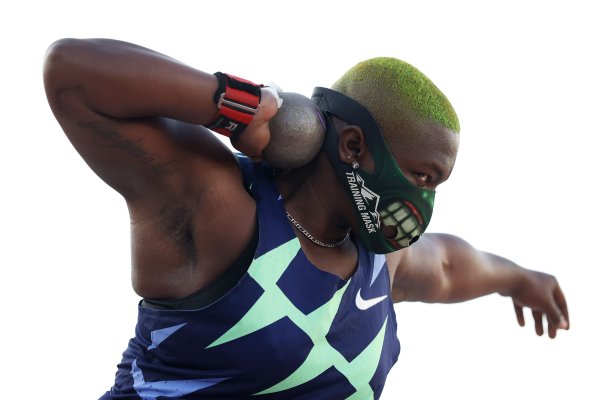 How Olympians Are Fighting to Put Mental Health First
Next Up: Editor's Pick