Haiti’s interim Prime Minister Claude Joseph, who has been leading the nation since the July 7 assassination of President Jovenel Moise, will step down in coming days amid an ongoing power struggle.

Joseph told the Washington Post Monday that he will be handing over the country to Ariel Henry, a neurosurgeon who had been named prime minister two days before Moise’s murder but was never sworn in. Election Minister Mathias Pierre confirmed the news to the Associated Press.

Henry has always maintained that he is the legitimate leader, but Joseph seemed to have the backing of Haiti’s power brokers and elements of the international community.

On Saturday that dynamic changed when the Core Group—a bloc of influential foreign governments including the U.S. and Canada—urged Henry to form a new government and hold “credible legislative and presidential elections.” Joseph was not mentioned in the brief statement.

Joseph told the Washington Post that he’d been meeting with Henry for the past week to resolve the dispute. It’s unclear when the transition might take place.

Former Prime Minister Laurent Lamothe said he wasn’t surprised by the decision, and that the Core Group statement and Joseph’s announcement likely happened in coordination.

“This is part of a grand political agreement to have an inclusive government and go to elections,” he said in a telephone interview. As part of that agreement, Joseph will maintain his role as Haiti’s Foreign Minister.

The parties have also agreed to move forward without an acting president and focus their efforts on holding legislative and presidential elections that have been scheduled for Sept. 26, Le Nouvelliste newspaper said, citing anonymous sources.

The power shift comes as Haiti is still investigating the brazen murder of Moise, 53, in his home by a group of men that included former soldiers from Colombia. He will be buried on Friday in the northern town of Cap-Haitien.

Henry, 71, is a French-trained neurosurgeon and public health expert who was the Minister of Social Affairs and Labor from 2015 to 2016. 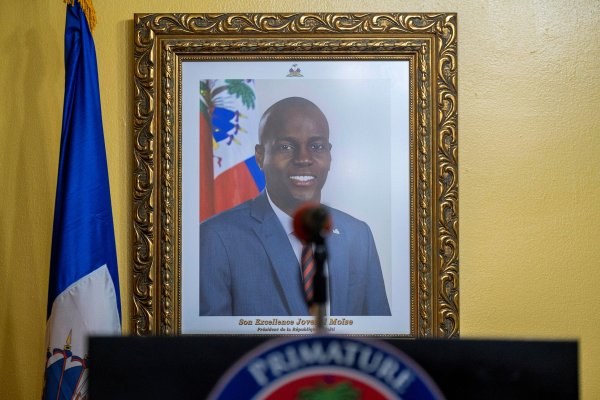 Murder of Haiti's President Presents a Rare Chance for Help
Next Up: Editor's Pick