China’s Wandering Elephants Have Charmed the World. But Steps Must Be Taken to Ensure Their Story Ends Happily

It’s a wildlife journey that has captivated the globe: A herd of 15 rogue elephants wandering over 300 miles from their home in Xishuangbanna National Nature Reserve, near China’s border with Laos. En route, they have pilfered from grain stores, scoffed mountains of corn and pineapples, and caused over $1 million of damage as they amble slowly through farmland and villages.

All the way, millions of Chinese and others from all around the globe have watched via a 24-hour live stream shot by a dozen swarming drones—and this reality TV hit has galvanized a greater awareness of environmental problems in a nation that, despite great strides, remains the world’s worst polluter.

“The reality is human activities are becoming more extensive, more wildlife areas are becoming urbanized, and even the so-called nature reserves are increasingly becoming like urban parks,” posted one fan on Chinese social media site Weibo. “More than any other time in history, we are emphasizing ecological conservation, but the reality is still brutal.”

The elephants’ antics have been highly watchable. One popular live stream showed a calf trying to clamber out from under a snoozing adult during a group nap. In another, some of the elephants seemed to get drunk after feasting on fermented grain. One calf, trying to drink water, was seen plunging head first into a pond. But, inevitably for viral sensations, interest in the elephants has begun to wane and viewer numbers are dwindling. In recent days, one stray member—a ten-year-old, 1.9-tonne male—was anaesthetized, captured and returned to the reserve after wandering into a congested area. Another youngster has fallen nine miles behind, prompting the rest of the herd to halt and wait for him, while trumpeting encouragement.

China’s wild elephants have doubled in number to more than 300 since the 1990s, but their habitat has shrunk by nearly two-thirds over the same period. Now conservationists are trying to leverage the greater public awareness of habitat loss to ensure that real change can come from the elephants’ plight. Not least as the wandering herd appears to be heading towards the city of Kunming, where China is hosting the COP15 U.N. biodiversity conference in October. “Human-wildlife coexistence” has already been added to the meeting’s agenda in honor of the gatecrashers.

“We cannot ignore the effect of rapid development of the local economy on the loss of wildlife habitat,” Professor Zhang Li, a renowned expert on Asian elephant migration at Beijing Normal University, wrote on his Weibo page. “Clear waters and green mountains are as valuable as mountains of gold and silver. A healthy and complete ecosystem is the cornerstone of sustainable economic development.”

The future of elephant conservation in China

Nobody is clear why the herd set out on this unprecedented trek. Some suggest that environmental degradation may have spurred them; others believe they are simply lost. Elephants live in matriarchal family groups, meaning an older, usually more experienced female is typically the boss. One possibility is that this leader made a decision to leave the nature reserve, or she was perhaps influenced by other members of the group.

Their odyssey begun in March last year when 16 elephants were seen moving from the nature reserve toward Pu’er, a city of 2.5 million. Within a month they had reached Yuanjiang County, about 230 miles north of their starting point. Since then, some have decided to return home, while others have given birth, swelling the herd.

Prof. Josh Plotnik, an expert in elephant psychology at Hunter College, City University of New York, tells TIME that they likely left due to gradually increasing human disturbance, which may have led to decreasing availability of food and water. Elephants can eat 200 kg of food every day and much of their traditional habitat near Xishuangbanna has been turned over to rubber plantations.

“The individual personalities of the elephants in this group [may have] contributed to their decision to leave,” says Plotnik. “It is also likely that once the elephants got a taste for the high quality food readily available in crop fields, such as sugar cane, they continued to seek it out.”

Now environmentalists are calling for the Chinese government to set up dedicated elephant nature reserves like the successful ones created for pandas and snow leopards. Given the price of rubber is extremely low, buying back land from farmers is a possibility.

“We hope that elephants can recover their populations in their historic range,” Becky Shu Chen, from the IUCN Asian Elephant Specialist Group, told state broadcaster CTGN. “But it’s extremely challenging [for them to] coexist with people.”

China has extremely harsh penalties for those caught killing elephants. However, rising elephant numbers, plus the destruction of their habitats combined with their new taste for energy-rich crops, means that human-elephant conflict will only rise.

“The big fear is that the intensity of conflict between humans and elephants can start as just a nuisance and quickly grow to the point where people or elephants get killed,” says Plotnik. “This is already happening in some countries in Asia, and spells a dire future for elephants if we don’t reverse the trend.” 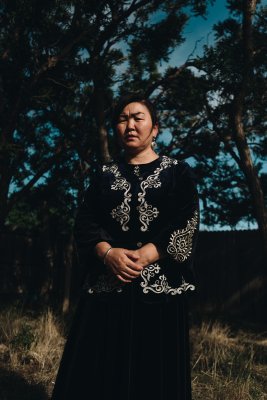 Beijing Is Redefining What It Means to Be Chinese
Next Up: Editor's Pick