As millions of people get vaccinated against COVID-19, the U.S. Centers for Disease Control and Prevention (CDC) and the Food and Drug Administration (FDA) are closely monitoring reports of side effects and adverse events among people getting immunized. On July 12, the FDA added a warning about the risk of Guillain-Barre to the single-dose Janssen/Johnson & Johnson vaccine. Anyone who receives the shot moving forward will get an updated fact sheet informing them of the small but increased risk. There have not been significant reports of the syndrome linked to the two other vaccines authorized in the U.S., made by Pfizer-BioNTech and Moderna, both of which rely on mRNA technology.

It’s the second warning for the single-dose vaccine; in April, the agency alerted users to the risk of blood clots among the vaccinated.

In a statement, the CDC said the agency has received about 100 reports of Guillain-Barre syndrome among 12.8 million J&J doses that have been administered, a tiny percentage. In most cases, symptoms appeared about two weeks after people received the vaccine, and most of the affected are male, with many over age 50 years.

According to the CDC, about 3,000 to 6,000 people develop Guillain-Barre each year, generally due to respiratory or intestinal tract infections. Guillain-Barre has been linked to influenza as well as COVID-19, for example, and the CDC stresses that the risk of the syndrome associated with natural infection in general is greater than the risk linked to vaccines, including the J&J shot.

A small percentage of people who are naturally infected by viruses and bacteria end up developing Guillain-Barre syndrome; it’s a rare, autoimmune condition in which the body’s immune system starts attacking nerves, leading to tingling and in some cases paralysis. Early research suggests some viruses or bacteria can look similar to areas of nerve cells, which causes the immune system to target them. Most people who are affected recover when the infection subsides.

Johnson & Johnson officials said in a statement that “the chance of having [Guillain-Barre] occur is very low, and the rate of reported cases exceeds the background rate by a small degree.”

The second warning for the vaccine could dim its appeal as the only authorized one-shot vaccine against COVID-19, which public health officials hoped would make inoculation more accessible for different parts of the world. The Pfizer-BioNTech and Moderna vaccines require two doses and as of June, also have a warning about the risk of myocarditis and pericarditis, or inflammation of the heart, especially among younger recipients of the shots. The warnings for all the vaccines reflect the intense scrutiny under which the COVID-19 vaccines are being rolled out, and the robust reporting network for capturing side effects and unusual reactions to the shots.

The J&J shot is not the first vaccine linked to Guillain-Barre. In 1976, during a mass vaccination effort against the swine influenza virus, researchers found a slightly increased risk of the syndrome among those getting the vaccine. The data are less clear on the seasonal influenza virus; during some seasons, there are more cases of Guillain-Barre reported, but generally, the risk is extremely small, on the order of one or two additional cases per million flu shots. With the flu as well, CDC experts say the risk of developing Guillain-Barre is greater among people naturally infected with the virus than among those getting the vaccine. 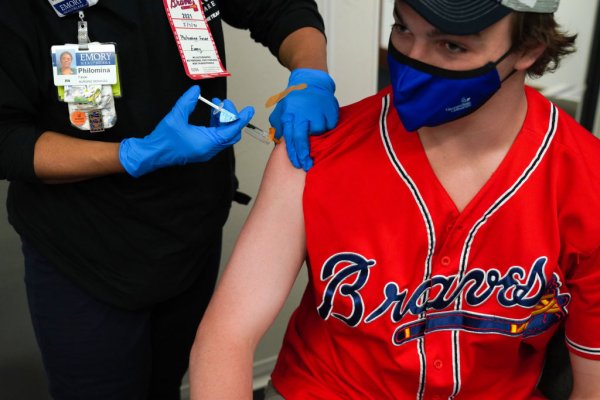 For the U.S. to Reach Herd Immunity We Need Vaccine Mandates
Next Up: Editor's Pick