Why Is a Florida-Based Pastor Under Arrest for the Assassination of Haiti's President?

The mystery surrounding the murder of Haiti’s President Jovenel Moïse deepened Monday as Haitian police arrested a U.S.-based evangelical pastor, placing him at the center of a murky plot surrounding an assassination that has stunned Haitians and international observers.

Police claim that Christian Emmanuel Sanon, a Haiti-born 62-year-old who has been living in Florida for more than two decades, helped recruit the group of some two dozen people who stormed Haiti’s presidential palace on July 7 and served as a middleman to the unnamed masterminds of the operation.

The gunmen fatally shot President Moïse, an embattled leader mired in corruption scandals, and wounded his wife, but left without injuring any members of the presidential guard—raising suspicion about why they faced so little resistance.

Sanon had publicly expressed a desire for political leadership in Haiti and railed against the corruption of the ruling class there. But his associates told the Associated Press he had no intention of killing the President. Here’s what to know about Sanon and the situation in Haiti.

Who is Christian Sanon?

Sanon identifies himself on social media as “a Medical Doctor and Christian Minister who is providing Leadership for Haiti through a life of positive action and absolute integrity.” Born in 1958 in Marigot, a town on Haiti’s southern coast, Sanon studied at university in the Dominican Republic and at the Midwestern Baptist Theological Seminary in Kansas City, Missouri, according to the Florida Baptist Historical Society.

Living on and off in Florida from at least the early 2000s, Sanon worked on church-related humanitarian projects and served as president of Organisation Rome Haiti, which local news reports in Tampa identified as a local non-profit that helped to send supplies to Haiti after the country’s devastating 2010 earthquake.

After the earthquake, which killed hundreds of thousands of people and levelled large areas of Haiti, Sanon appears to have mounted the beginnings of a quasi-political campaign. In 2011, he posted several YouTube videos in which he criticized Haiti’s government for corruption in the use of relief funds and other failures of leadership in rebuilding the country. “If you talk to young people about hope, they laugh at you,” he says in one clip. “I will bring hope to them.”

Sanon stopped updating his Twitter and YouTube pages in 2011 and over the next few years faced financial difficulties in Florida. Per the Miami Herald, he filed for bankruptcy in Tampa in 2013 and has had more than a dozen businesses registered in the state, most of which are now inactive.

His leadership ambitions may not have ended in the 2010s, though. A Haitian university professor interviewed by the New York Times claimed he had met Sanon twice in June and that “[Sanon had] said he was sent by God. He was sent on a mission of God to replace Moïse.”

How do police allege Sanon was involved in the assassination?

On Saturday, Haiti’s police chief Léon Charles said that he believed a “high-profile doctor” had hired a Miami-based security firm, which had in turn hired a group made up mostly of Colombian former soldiers to carry out the operation. On Sunday, Charles identified Sanon by name and said he had arrived in Haiti in June with “political motivations,” travelling on a private jet with several of the alleged perpetrators of the shooting.

Charles said a Colombian suspect had told police that the group’s initial mission was to protect Sanon during his time in Haiti, but that at some point the plan shifted to arresting Moïse. He did not specify when the plan shifted to killing the President.

The police chief said his officers had raided Sanon’s home in Port-au-Prince and found materials including 20 boxes of bullets, gun holsters, four Dominican Republic license plates, and correspondence with unidentified people involved in the operation, as well as a hat bearing the logo of the U.S. Drug Enforcement Administration (DEA). (The perpetrators of the attack on Moïse falsely identified themselves as DEA agents, per videos of the incident, and the DEA said Monday that one of its former informants had been arrested during the investigation, though the agency itself was not involved.)

A Florida-based friend of Sanon told AP that the pastor had been duped by people “claiming to represent the U.S. State and Justice departments who wanted to install him as President.” Sanon had believed the plan was to arrest, but not kill Moïse, the friend claimed.

What’s next for Haiti?

As the investigation into Moïse’s assasination continues, it’s unclear who will fill a massive power vacuum left in Haiti—which was already in political chaos before the President’s death— and analysts warn that the country could enter an even more volatile new chapter. Several years of fierce street protests over corruption under Moïse have strained relationships between the government and the public, and increasingly powerful criminal gangs have strengthened their grip on the country.

Moïse had been ruling by decree since January 2020, after he refused to organize legislative elections, leaving all but 10 of Haiti’s parliamentary seats unoccupied. Moïse’s critics said his five-year term should have ended in February this year, but he refused to step down, arguing that the first year of his term had been taken up by an interim government. He said his term would end in February 2022, a claim backed by the U.S.

Haiti’s constitution dictates that the Prime Minister take power if the President is unable to carry out his duties, but three men now claim to be the country’s rightful leader. Moïse had appointed an interim Prime Minister, Claude Joseph, in April, and days before his death had named a new Prime Minister, Ariel Henry. Meanwhile eight of the ten remaining senators in the country have signed a resolution arguing that senate leader Joseph Lambert should become interim president.

The U.S. has so far resisted a controversial call by Joseph to deploy troops to Haiti to help to protect infrastructure and stabilize the country. The White House said Monday that representatives from the Department of Justice, Department of Homeland Security, Department of State, and National Security Council had met with Joseph, Henry and Lambert, as well as other government officials and police, in an attempt to “encourage open and constructive dialogue to reach a political accord that can enable the country to hold free and fair elections.” 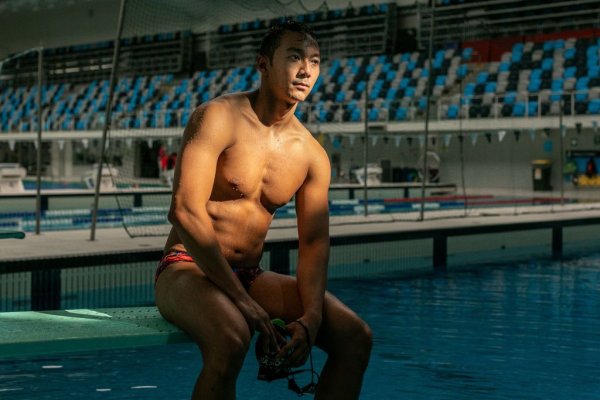 Myanmar's Top Swimmer Boycotts the Olympics
Next Up: Editor's Pick