If you want to become an Olympic sport climber you’d better be able to tie a mean knot.

That’s one lesson I learned while spending a day the Team USA climber Kyra Condie, whom TIME named to its most recent list of Next Generation Leaders for her work advocating for diversity and inclusion in her sport. Condie, who is based in Salt Lake City, also took the time to participate in a video demonstration, seen above, of sport climbing, which will make its Olympic debut in Tokyo. (I gave it a try. Condie was kind enough to tie a complicated knot for me).

Olympic climbing won’t take place on a mountain. The competitors will scale climbing walls, not unlike those found in indoor rock climbing gyms that have grown more popular in recent years. The Olympic event combines three disciplines: speed climbing, bouldering and lead climbing.

In speed climbing, athletes race up a 15-meter wall. It’ll be the quickest sprint at the Games: the men’s world record is 5.208 seconds—set in May by Veddriq Leonardo of Indonesia—and the women’s world record, set by Russia’s Iuliia Kaplina, is 6.964 seconds. (At the 2024 Paris Olympics, speed climbing is set to become its own event). “Speed climbing is the most straightforward,” says Condie. “It’s always the same. You can climb on the same wall in Moscow as you can in Chicago. The holds are regulated. They’re always the same distance apart. They’re always in the exact same orientation. That one is about how fast you go. It’s purely a race.”

Bouldering is more of a puzzle: athletes get four minutes to climb as many routes as possible on a shorter wall. If you fall, you get to try again. Condie says bouldering is her favorite discipline. “There’s no rope. There’s no harness,” Condie says. “The best way to fall is to hit feet first, then roll backwards.”

Having tried bouldering for the first time with Condie, I can say from experience—learning to fall correctly takes practice.

Finally, there’s lead climbing. “Leads climbing, it’s longer and you have a harness and a rope,” says Condie. “It’s kind of more classic climbing when you picture rock climbing. And you only get one try in lead climbing, which for me makes it the most stressful. And it’s about how far you go, purely. So if I get to hold number 35, and somebody else gets to hold number 37, they’ll beat me in that.”

How is Olympic sport climbing scored?

In climbing, the Olympic scoring system is fairly straightforward. The lower your score, the better. “Each discipline is scored within itself,” says Condie. “And then you get a rank. So say I win bouldering, win lead, and get 10th in speed. Then those are my three ranks. And they multiply the three ranks together. So I’d have a one time a one times a 10, and would have 10 points.”

Why multiplication? Math nerds, rejoice: seems the identity property is making its Olympic debut! “The reason it’s multiplication is actually because they wanted to have all three disciplines showcased at the Olympics, and multiplication gives an advantage to somebody who has a one,” says Condie. Two times one, for example, is two. Two plus one is three. So in climbing, the times tables help top performers.

Climbing starts on Aug. 3, with the men’s qualification round; the men’s final is on Aug. 5, and the women will determine their medalists on Aug. 6.

I’m glad I tried climbing: it was an intense strength workout (especially for someone who is, at best, mildly interested in strength workouts). The sport is also probably not ideal for a person, like me, who’s afraid of heights. I may not have scaled very high up the wall. Still, thank goodness Condie tied that knot. 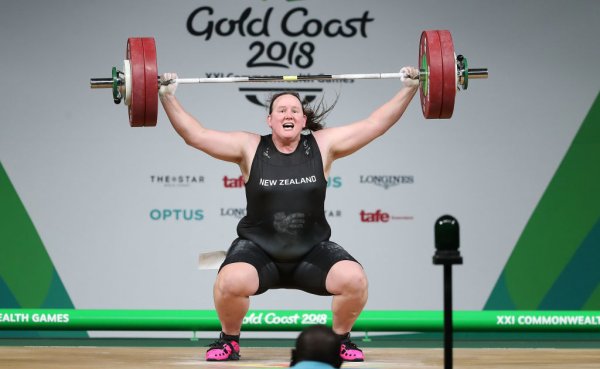 Record Number of LGBTQ Athletes at Olympics
Next Up: Editor's Pick