California and parts of the West face more punishing temperatures Monday that will continue to stress power grids also threatened by a wildfire raging in the Northwest, though some cooling from the weekend’s record highs is expected by Tuesday.

Most of the Golden State remains under excessive heat warnings with highs set to top 100 degrees Fahrenheit (38 Celsius) through evening, the National Weather Service said. California’s grid operator asked customers to conserve for the third time in four days and requested that plant operators delay planned maintenance, citing unreliable transmission lines from Oregon due to the Bootleg Fire.

“The heat is still blazing,” said Bob Oravec, a senior branch forecaster at the U.S. Weather Prediction Center. “Temperatures do moderate a little across parts of the West, starting as early as Tuesday, but it is still a hot summer.”

The latest challenges for officials in the most prosperous and productive U.S. state, from heat and drought to fire and electricity, offer the latest demonstration of how vulnerable power grids have become to climate change. Hot weather and dry air are again posing tandem risks for power supplies by raising demand for electricity while also bringing increased wildfire threats.

The California Independent System Operator has issued three alerts since Friday asking consumers to reduce power use to reduce strains on the state’s grid. Such pleas are the new normal that will require behavior to change for years, Chief Executive Officer Elliot Mainzer said last week. New York City had to do the same thing two weeks ago during a punishing heat wave.

The biggest crunch typically is from 4 p.m. to 9 p.m. Those are some of the hottest hours of the day as well as when solar power supplies start to fade with the sunset.

More than 900 firefighters are battling the Bootleg Fire, which grew Sunday beyond 143,000 acres in the Fremont-Winema National Forest and on private land just north of the California border, the Oregon Department of Forestry said on its website.

The blaze is one of 13 new large fires burning across several states, from Montana to Arizona, the National Interagency Fire Center said. With at least 768,000 acres ablaze, satellite photos show smoke covers much of the West.

Air quality alerts have been issued in a number of western states, including Yellowstone National Park, because of wildfire smoke creating dangerous conditions for children, the elderly, and people with respiratory conditions.

The good news is that the annual monsoon season in Arizona and New Mexico looks to be starting, Oravec said. Phoenix is forecast to have thunderstorms this week, which lower temperatures and bring much-needed rain. Last year’s rains largely didn’t materialize, pushing the West into a record drought. 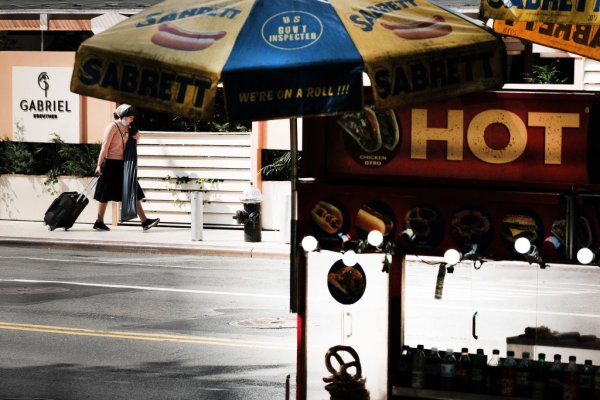 Last Month Was the Hottest June in North America in Recent Recorded History
Next Up: Editor's Pick