I Once Called English Football a 'Tragedy' on the Cover of TIME. Who Knew It Might Have a Happy Ending?

Tense England fans watch the final few minutes of the live broadcast of the semi-final match between England and Denmark at BOXPARK Croydon on July 07, 2021 in London, England
Dan Kitwood—Getty Images
By Bill Saporito

In the Euro 2000 championship, England and Germany clashed in the town of Charleroi, Belgium. And I do mean clash. Egged on by jingoistic tabloids making insipid World War II allusions, English knuckleheads gathered outside the stadium and tried their best to rumble with German fans, but the constabulary largely kept order. Inside the stadium, order, at least the usual kind, did not prevail: England beat Germany 1-0.

Oh, the glory. England was rising again. Four years later, England reached the quarterfinals of Euro 2004 and Germany reached rock bottom. The Germans promptly went to work on Das Reboot, overhauling their development system and turgid style of play. That produced a Euro 2008 finalist, a Euro 2012 semifinalist and then a World Cup champion in 2014.

England went—nowhere. In the lead up to Euro 2012, I wrote a cover story for TIME called The Tragedy of English Football, attempting to explain the national team’s half-century-long record of underachievement on the world stage.

Supporters of the Three Lions were less than thrilled. I was invited on a sport chat show and treated like… an American. Did I even watch the games, one of the football experts asked, as if satellite television hadn’t been invented. Afraid so, I said. I have even been to the World Cup—remember that match in South Africa when you couldn’t beat the Yanks? What a night.

What I found remarkable then about the English and the game they codified is how utterly convinced they were of their own superiority, especially given the many results to the contrary. Yes, there was that miracle in 1966 but the game had long since passed them by. As in a 0-0 draw with Italy in 2012 in which the peerless Andrea Pirlo completed more passes himself than the entire English midfield and topped it off with a Penenka penalty kick. And then there was 2016—and Iceland.

And now, heading into this Sunday’s Euro 2020 final against Italy, here we are again with English fans sputtering on about “It’s coming home.”

Only this time, the expectations are real. We’re in another decade and this is truly a different English team. There’s a crown jewel of a striker in Harry Kane, a multifaceted talent and leader. No opponent has been able to handle the speed of Raheem Sterling who, having gone to finishing school under the tutelage of Pep Guardiola at Manchester City, has become a more complete player. In the midfield, there is actual creativity, especially when Jack Grealish gets on the pitch. The defense has as much agility out wide as it does strength in the middle: Kyle Walker has made opposing forwards look slow as he hunts them down. They have a genuine chance to win at Wembley, one of the game’s cathedrals. Italy would have to win at the Vatican to top that.

This is a truly different England, too. The national team is on the verge of conquering the continent that the nation just left. This might be called Boris Johnson’s Brexit team, if the PM actually knew or cared anything about football (and if the players hadn’t enraged Johnson’s Tories by taking the knee, or holding them account for failing to feed poor kids).

There’s not currently much unison across much of the United Kingdom. Boris has mismanaged the pandemic, and broken promises to fishermen, musicians and other businesses currently cut out of Europe. Meanwhile Scotland, where a majority voted to remain in the E.U., is threatening to leave the U.K. while loyalist politicians in Northern Ireland seethe over being sold a bill of goods regarding the border.

But in England, for the moment, all is well. The omens are good: England’s path to the final has not been particularly difficult. It beat a Germany clearly on the decline, breezed by an exhausted Ukrainian team and edged a good Denmark side (minus its best player) on a marginal penalty decision, a kick that Kane bungled before scoring. In the other half of the draw, France, Spain and Portugal, former champions all, managed to eliminate themselves with less than regal performances.

That leaves Italy, of course, who bring, dare we say, Continental flair to augment their usual toughness and a wealth of big game experience. The Italians aren’t blustering the way English fans tend to do. There are no three lions. No royals. No assertions about this being Italy’s time because Italy has had plenty of time being champion.

So good luck then, England. Do have a great game and by all means bring it home. Maybe once you actually do, you’ll stop going on about it. 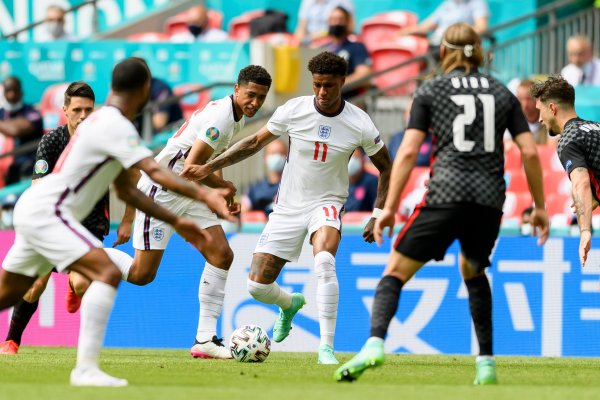 England vs Germany Offers End to 25 Years of Hurt for One Man, and a Nation
Next Up: Editor's Pick