Even if you don’t care much about whales, or don’t think you do, Joshua Zeman’s enthusiastic documentary The Loneliest Whale: The Search for 52 might make you care about people who care about whales. We’re fortunate these magnificent and sensitive creatures have such ardent supporters in general, and in Zeman’s film—which lists Leonardo DiCaprio as an executive producer—we meet a few who take a keen interest in one mysterious mammal in particular: the elusive whale known as 52, so named because his call rings out at 52 hertz, a frequency unmatched by any other known whale.

52 was discovered in 1989 by the U.S. Navy—at first, he was only a sound, one so odd that it was believed to come from a submarine. But marine scientist William A. Watkins knew what he was hearing, and until his death in 2004, he tracked 52’s comings and goings arduously. Meanwhile, 52 has captured the popular imagination, earning the nickname that gives the film its title: Because 52’s sound is unique, attached to this one lone denizen of the ocean, it’s believed that he’s calling for friends who possibly don’t understand him—or for another whale of his specific type who simply doesn’t exist. And so this lonely seafaring fellow—the subject of newspaper articles, songs, paintings and probably more than one tattoo—has become a metaphor for our own need to connect and communicate with others.

Of course, some people just like whales, and 52 is a special one. Zeman himself has loved whales since he was a kid—he explains in voiceover that he saw his first one while working on a sailing vessel as a youngster. Near the beginning of The Loneliest Whale, he wonders if he might even be able to find 52, to make him more than just a diagram of soundwaves. And so he manages to assemble a group of eager marine scientists and whale specialists for a short mission off the coast of California—there is hope that 52 just may happen to be swimming along there with a recently tracked group of whales, humming his solitary, special song.

The Loneliest Whale is a good example of what usually happens when you set out in search of one specific thing: you find something else, in this case a surprise discovery that I shall keep as close as the secrets of the deep. But as it wends toward that conclusion, The Loneliest Whale is both invigorating and calming to watch. Calming because, well, who doesn’t feel better after a glimpse or two of these elusive and beautiful beasts, twirling and skimming through their underwater ballet routines? And invigorating because it’s surprisingly exciting to watch marine specialists perched in little boats, chasing after these behemoths in the hopes of affixing trackers to them—it isn’t as easy as it sounds.

Zeman tucks a great deal of nerdy whale lore in between, and includes interviews with people who care deeply about whales, among them a musician who attempts to improvise with them. This seems wacky until you see him on a boat with his clarinet, spinning out satiny loops of sound that do sound enticingly whale-like. The Loneliest Whale tells us that whales—when they’re not thwarted by sound pollution caused by container ships and other large vessels, a dangerous problem for them—can hear one another call from as far as 100 miles away. 52 is out there, somewhere, evading human detection as he sings for all he’s worth. Presumably he’s calling, perhaps in vain, for other whales. But here on land, he brings folklore and science together as we lean in close to listen. 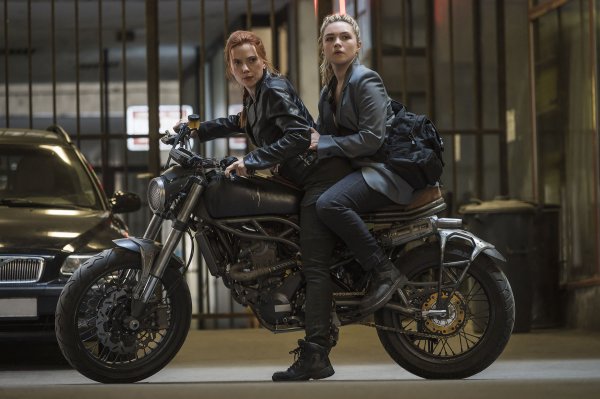 Black Widow Is a Showcase for Florence Pugh and Scarlett Johansson First and a Marvel Superhero Movie Second
Next Up: Editor's Pick