Contraceptive Access May Not Be as Life-Changing for the World’s Poorest Women as Previously Thought, According to a New Study

At the Generation Equality Forum in Paris in early July, the U.N. attracted political and business leaders from across the globe to talk about gender equality, and also invited them to put their moneys where their mouths were. Among the Forum’s seven key platforms were a push for more economic justice for women—meaning equal access to education and jobs and caregiving support—and a greater ability for women to control their “bodily autonomy”—meaning more access to sex education, contraception and abortion services. It’s an article of faith among development experts that those two aims are inextricably linked.

As everyone in public policy knows, it’s all just noble talk unless somebody funds it, and in Paris, funds materialized. The Bill and Melinda Gates Foundation promised to put $1.4 billion into family planning over the next five years. The Ford Foundation offered up $420 million to be spread over six of the different causes, and the government of Iceland doubled its contributions to the United Nations Population Fund to support “flexible funding for sexual and reproductive health services to those most in need.”

The investments are large because family planning, and in particular, access to contraceptives, is widely acknowledged to have robust and far reaching ripple effects on the welfare of mothers and children, reducing maternal mortality, improving women’s health, allowing women to take control of how many children they have and when they have them and thus be able to participate more in the labor force, or get educated or start their own businesses.

But a significant new study has analyzed the longterm effects of an earlier program measuring the impact of contraceptive access among some of the world’s poorest women. It found that, decades later, those women were not richer than mothers who did not have such easy access to family planning. And in some respects, they had worse health.

“We don’t see any changes in economic prospects,” says Randall Kuhn, an associate professor in community health sciences at UCLA, and the senior author of the paper. “We don’t see positive changes in health. The one change that we do observe is that women in the treatment area have slightly higher body mass index.”

The new research, which was published in the highly regarded Proceedings of the National Academy of Sciences (PNAS) on July 5, followed up on a 12-years-long study that had been done 35 years earlier in Matlab, Bangladesh, at a famous (in academic circles) health research site. That earlier program tried to establish whether impoverished under-educated women in a religiously conservative area would use contraceptives if all the obstacles were removed. Women in more than 70 villages were provided with maternal health services and whatever contraceptive method they chose. Crucially, the contraceptives were delivered to their door—a method President Biden recently suggested for COVID-19 vaccines—by trained local women.

The program was widely considered to be a huge success. The uptake was impressive; the fertility of the women in those villages plummeted, compared to the very similar villages around them. Their children were healthier, fewer women died in childbirth. Eventually, a version of the program was adopted throughout Bangladesh, Asia and other developing nations. Follow up studies even suggested that the families who participated were not only healthier, but wealthier.

This new study casts some doubt on the previous findings.

Thirty-five years after the previous data was meticulously collected, an international group of scholars sifted through it and found that the women in the program were no better off financially than those who did not participate. And, in some ways, given the status and support a large family accorded women in that region, they were worse off. “What we wanted to know is did they make more money,” says Kuhn. “And what we saw is that they didn’t.” (The study suggests the health effects could be explained by concurrent changes in access to nutrition across the region.)

Kuhn notes that the Matlab program targeted older women who had already three or four pregnancies, rather than women at the beginning of their childbearing years. That timing makes a big difference; younger women who can decide when to have children have a better shot at getting educated and timing their reproduction for when they feel ready. For women who already have several children, the effect of contraceptive access is not giving them more kids than they and their family can care for.

“I think it’s a very important study,” says David Lam, an economics professor at the University of Michigan, who was not involved in the research, but reviewed the paper for PNAS, and was impressed by its rigor. “It does seem that [access to contraceptives] doesn’t have the effects we thought it might have on later life health of adult women or their economic conditions, and that’s surprising.”

Several academics, however, were dubious of the importance of the results. “There are mountains of scholarship on the contributions of family planning to women’s health and economic well being,” says Barbara Seligman, a VP for international programs at the Population Research Bureau. “This is a single study, a single study that looks at a cohort of women who are not the women who are the immediate program beneficiaries. These are women who were exposed to the treatment 35 years ago.”

Much may have happened in these women’s lives since they participated in the program, Seligman points out, that may have affected their health and fortunes.

Jocelyn Finlay, a visiting scientist at the Department of Global Health and Population at Harvard’s T.H Chan’s School of Public Health who has extensively studied the economic impact of reproductive health, also questioned the result. “Coupled with what I know about the study site and what we understand about the processes of being able to have access to family planning and its impact on women’s economic empowerment,” she says, “it makes me think, is it a truly robust bit of evidence?” Noting that access to family planning is considered a human right, she cautions against reading too much into one study, with a narrow focus. “The study is just a piece of the puzzle and so they’ve chosen very specific outcomes.”

There are others, however, who question which way the link between contraception and economic health goes. Mushfiq Mobarak, a Bangladeshi professor of economics at Yale University who specializes in development, calls the study “amazingly important.” While he would not have predicted that the women at Matlab would be no better off financially than their counterparts, it doesn’t surprise him. The study’s timeframe overlapped with a massive growth in the number of garment factories in Bangladesh, raising job opportunities for women in the program as well as those in the group who were not getting the services. “[The availability of work] is the core factor,” he says. “When that happens then demand for contraception goes up. The driving force behind all the big changes are the underlying economics.” If he wanted to raise women’s welfare and had to choose between funding contraceptive programs and job-creation programs, he says he’d opt for the latter.

The study does not go that far, but suggests that contraceptive programs need to be nested within a wider group of initiatives to have the full benefit. The question, says Kuhn, is not whether family planning should be funded less. “Family planning is wonderful because it gives people control their own bodies and because it leads to fewer unwanted pregnancies. There are so many reasons why it’s great.” But his study suggests, it’s not enough. “The question would be, should those family planning investments be accompanied by investments in women? Would there be greater ROI if you paired those investments with funding in building women’s economic activity, women’s status, serious legal change?”

Amid all the controversy and disagreement, there’s one consistent theme: the improved welfare of children. In his commentary accompanying the study, Lam notes in his studies of fertility decline in Brazil, he had found a similar mismatch. The more education a woman had, the fewer children she bore. “But if you looked at whether those women were working more, they were not,” he says. “What was different about them was that their children were having much better outcomes. Their children were staying in school longer. They were healthier, they had higher rates of survival. Our argument of what was going on, from an economic perspective, is that the women were basically channeling all that higher productivity they were getting from better education into their children.”

Lam suggests that this may be what happened at Matlab as well. A previous Matlab study by one of the new study’s co-authors found that the children of those mothers were indeed better off, with improvements among other things in height, cognition and education. It might be that, as parents everywhere do, the Bangladeshi women took their newfound freedom and advantages and expended them not on making more money, but on improving life for their children.

The original version of this story misstated the amount The Gates Foundation is committing to spend on family planning. It is $1.4 billion, not $4 billion. 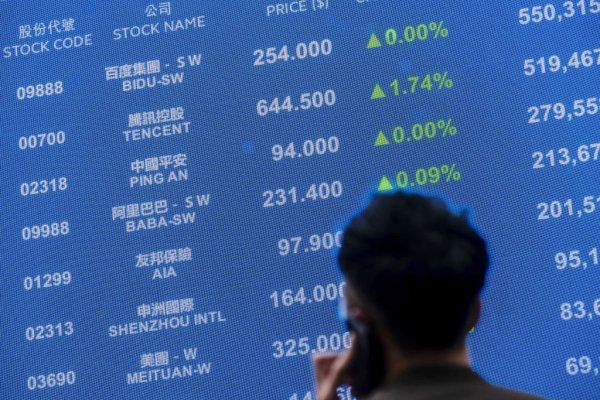 What China's Big Tech Crackdown Is Really About
Next Up: Editor's Pick