Portland food cart co-owners Eric and Nicole Gitenstein didn’t have much choice about whether to open their business during this week’s unprecedented heat wave plaguing the Pacific Northwest. Excess heat from their refrigerators and burners often raises temperatures inside their cart, MF Tasty, 10 to 15 degrees higher than those outside. With area temperatures peaking at 116° F on June 28, working in such conditions could have put their lives in danger.

“It’s better to lose a weekend than to lose your life, or be hospitalized for heat exhaustion,” Eric says.

His fears were warranted—the human toll from the extreme heat that has suffocated the Pacific Northwest in recent days resembles that of an earthquake or hurricane. The high temperatures are responsible for at least 63 deaths across Oregon alone, per officials, while more than 1,100 people across Oregon and Washington states have been hospitalized with overheating symptoms.

The record-breaking temperatures have also exacted a serious economic toll, with businesses across the region—many still recovering from coronavirus shutdowns—closing their doors, many to keep their employees safe. “It just seemed incredibly unsafe to ask anybody to work,” says Cathy Whims, owner of Nostrana, a Portland Italian restaurant. “We couldn’t possibly do that with any good conscience.” At Tough Luck, a bar in Portland, general manager Colin Riley also closed up shop—and was glad he did so. A temperature reading he took in the kitchen early in the afternoon on July 27 registered at 115° F, even with the air conditioning on, in part because of excess heat from the refrigerator. “It was definitely a bit scary,” he says.

Area businesses have been affected by climate disasters before—last September, for example, smoke from massive wildfires caused dozens of Portland restaurants to close. That’s causing some owners and workers to ponder the long-term viability of their operations. “Between the forest fires last year, and the heat wave this summer, it’s definitely making me nervous,” says Tough Luck bartender Spencer Pond. “Will restaurants be able to stay open?”

As the planet continues to warm and the number of too-hot-to-work days add up, business losses across the U.S. are likely to mount. Up to 1.8 billion workforce hours, or about 11 working hours per U.S. worker, could be lost annually over the next three decades due to extreme heat caused by climate change, according to research published this February in the journal Climatic Change. Economic losses caused by those lost hours could rise fourfold between 2016 and 2100.

The issue of extreme heat as a worsening effect of climate change is beginning to make the rounds in Congress. In March, Democrats introduced legislation in both chambers that would direct the Occupational Safety and Health Administration to set new rules meant to protect workers from dangerously hot conditions, like mandating paid cool-down breaks for employees working in high temperatures. Those measures are particularly important for agricultural workers, who often spend long hours working in extreme heat conditions. The legislation appears to have stalled, though the latest heat wave may be shining light on the issue—United Farm Workers, an agricultural union, urged Washington governor Jay Inslee this week to implement emergency standards to protect workers from excessive heat.

If the economic impacts of extreme heat are a threat for the U.S., they may be much worse in parts of the world without the resources and institutions to mitigate the growing problem. “In the long run, rich places as they get hotter will spend money to adapt,” says Bob Kopp, director of the Rutgers Institute of Earth, Ocean & Atmospheric Sciences. “That option isn’t available to people in much of the rest of the world.”

And even the best adaptation efforts may not help the U.S. escape the economic consequences of extreme heat, which could knock $170 billion off the country’s GDP by 2100, according to the U.S. Environmental Protection Agency. For individuals, that means lower paychecks, new medical bills, and lost revenue for many businesses already running on thin margins. Eric Gitenstein, for instance, says the days lost to the heat wave badly hurt Portland’s food carts, which have to make sales during the crucial summer months in order to get through the winter season.

“It’s one thing for this to be a random occurrence,” says Eric Gitenstein, the food cart owner. “If this is the norm, that’s going to destroy our income.” 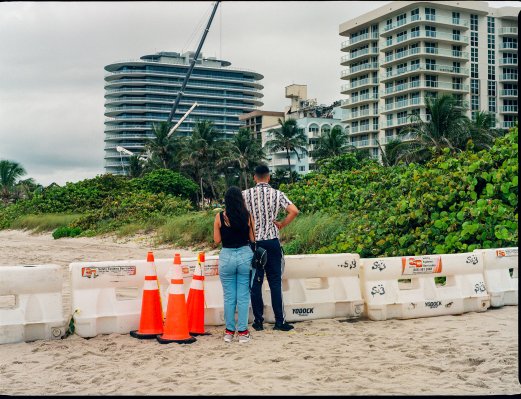