A painting by John Trumbull, 'Signing the Declaration of Independence, 28th June 1776' commissioned 1817, showing Thomas Jefferson and the drafting committee presenting the document to John Hancock.
Culture Club/Getty Images
Ideas
By Robert G. Parkinson
Robert G. Parkinson is associate professor of history at Binghamton University and the author of Thirteen Clocks: How Race United the Colonies and Made the Declaration of Independence.

Slavery and arguments about race were not only at the heart of the American founding; it was what united the states in the first place. We have been reluctant to admit just how thoroughly the Founding Fathers thought about, talked about, and wrote about race at the moment of American independence.

Part of the reason why we haven’t fully realized this is because of John Adams. More than forty years after 1776, an 83-year-old John Adams wanted Americans to know just how astounding it was that America declared independence. Getting all thirteen colonies to reach this same, momentous decision, Adams remembered, was “certainly a very difficult enterprise” and “perhaps a singular example in the history of mankind.” Colonists really didn’t know or particularly like one another. They fought with each other all the time. But something phenomenal happened in 1776. “Thirteen clocks were made to strike together—a perfection of mechanism which no artist had ever before effected.” Adams was, of course, bragging, subtly suggesting that the work he, Jefferson, Franklin, and the Continental Congress did was pretty much a miracle. This magical way of thinking is compelling. It created an attractive, exceptional origin story for the United States. But it covered up the work that Adams and his colleagues undertook at the time. That work was about publicizing stories to make Americans afraid of British-sponsored slave “insurrections” and Native “massacres.” He was hiding just how important race was to the founding.

Recently, a controversy over “critical race theory” has ignited public debate about the centrality of race to American history. As a part of that debate, which has been ongoing since the publication of the 1619 Project, the nation’s founding has come under the most scrutiny. How much did 1776 have to do with race and slavery? The answer is: you can’t tell the story without it. We have given the founding fathers passes when it comes to race. Although we have sometimes condemned an individual founder like Jefferson as a hypocrite, we have explained it away, either by citing the language in the opening paragraphs of the Declaration, or the emancipation efforts of some northern states, or by saying, well, it was the eighteenth century, what can you expect? Yet you only have to look at the very moment of Revolution to see how deeply race was embedded in the patriot cause.

Once the shooting started, patriot leaders started talking about race in very different ways than they had before. As soon as the news of Lexington and Concord spread throughout North America, colonists began to think, talk, and worry a lot about what role enslaved people might play in this new world of war with Great Britain. For the next fifteen months, between April 1775 and July 1776, they would read about British agents trying to incite slave rebellions all over the South. Patriot leaders broadcast news of royal officials throughout America plotting with slaves to put down the rebellion. In November 1775, Virginia Governor Lord Dunmore famously issued an emancipation proclamation, but he was not the only royal governor accused of embracing such tactics. Adams, Jefferson, Franklin, Washington, and their colleagues worked diligently in those fifteen months to alert as many colonists as they could about such British “treachery.” One of those British officials who had been chased from Charleston, South Carolina wrote that “massacres and instigated insurrections were Words in the mouth of every child.”

The patriots’ efforts to get stories about “instigated insurrections” into the mouths of American children culminated in the Declaration of Independence. In fact, it comes at the climax of the document. The Continental Congress accused King George of twenty-seven crimes. These were the “facts to be submitted to a candid world” that led the colonies to the necessity of declaring independence. The very last one was about enslaved and Native peoples potentially joining the King to destroy American liberty.

Jefferson had written a moving passage that referred to the African slave trade as an “assemblage of horrors” and a “cruel war against human nature itself.” Tragically, Congress cut nearly the whole thing—but not all of it. They kept the bit that was in the mouth of every American child, referring to slaves with the albeit veiled with common 18th century way of referring to slaves as “domestics.” The final grievance against King George, the ultimate deal-breaker, reads: “He has excited domestic insurrections amongst us, and has endeavored to bring on the inhabitants of our frontiers, the merciless Indian Savages, whose known rule of warfare, is an undistinguished destruction of all ages, sexes and conditions.” After leveling that charge, the Declaration pivoted to say what American independence would look like. Because patriots had rejected these efforts to recruit enslaved and Native fighters, Americans were now to act as free and independent states and “do all other Acts and Things which Independent States may of right do.” This talk that was intended to generate racial fear was a key factor in the march toward independence.

That the Continental Congress felt like Jefferson’s antislavery sentiments were too controversial, but the accusation of “instigated insurrections” was not, suggests just how successful their campaign had been. Patriot leaders found one thing that white colonists shared: racism. The founders embraced and mobilized colonial prejudices about potentially dangerous African Americans and used those fears to unite the colonists in one “common cause.” For too long we have taken an elderly John Adams at his word about what brought the thirteen colonies together. He had forgotten—purposefully—how four decades earlier he had mobilized American prejudices about Black people (what today we would call racism) to get the colonies to come together as one union. That effort made America independent, but it also buried race deep in the cornerstone of the American republic that was born on July 4, 1776. 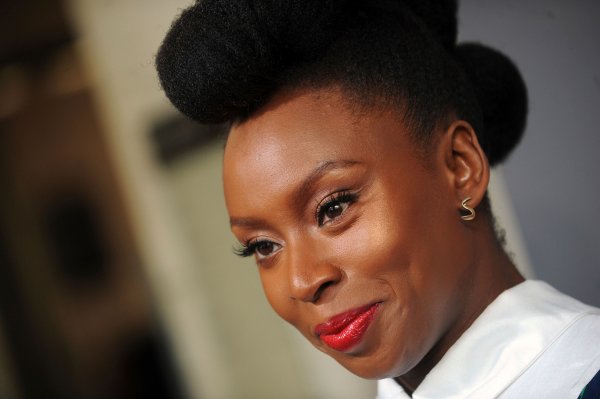 'Stories Can Be War.' How Chimamanda Ngozi Adichie's Viral Essay Has Implications Far Beyond the Literary World
Next Up: Editor's Pick