U.N.: Time Is Running Out for Climate-Change Action

A worldwide push over the next 15 years is the only way to avoid the disastrous effects of climate change, experts appointed by the U.N. said Sunday.

A report released Sunday by the Intergovernmental Panel on Climate Change showed that it is still possible to contain the worst effects of climate change, but governments must take extensive measures to reduce carbon emissions, the New York Times reports.

Global greenhouse-gas emissions must be reduced by 40% to 70% compared with 2010 by midcentury in order to limit global mean temperature rises to 2ºC, or 3.6ºF, above preindustrial levels. Exceeding 2ºC temperature rises will cause drastic effects, including the collapse of ice sheets, mass plant-and-animal extinction, food shortages, flooding and extreme weather events, scientists say.

The report also warned that widespread inaction is already leading to far-reaching consequences — emissions grew more quickly between 2000 and 2010 than in each of the three previous decades, the IPCC said.

The IPCC said that there is some reason for optimism. Many countries, such as Denmark, Germany and parts of the U.S., have increasingly begun to use wind and solar power. The costs of renewable energy are dropping quickly, making it more practical to deploy on a large scale.

Renewable energy can also grow the world economy, the IPCC said, and could potentially balance out the costs associated with mitigating climate change.

“This report is a wake-up call about global economic opportunity we can seize today as we lead on climate change,” Secretary of State John Kerry said in a statement Sunday. “We already know that climate science is unambiguous and that every year the world defers action, the costs only grow. But focusing only on grim realities misses promising realities staring us right in the face.”

“Climate policies in line with the 2ºC goal need to aim for substantial emission reductions,” said Ottmar Edenhofer, a co-chairman of the committee that wrote the report. “There is a clear message from science: To avoid dangerous interference with the climate system, we need to move away from business as usual.” 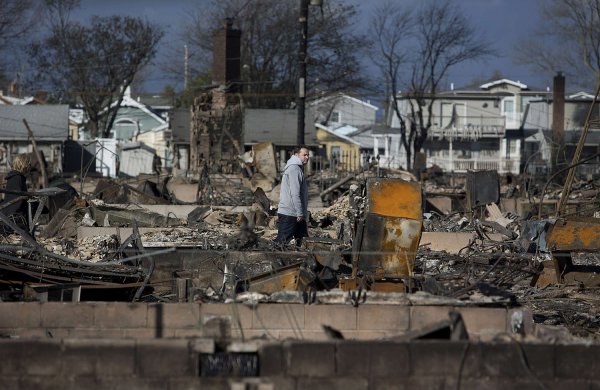 Climate Change Is a Game of Risk
Next Up: Editor's Pick