Miami Is Used to Disasters. The Surfside Collapse Felt Different

Estelle Hedaya’s apartment facing the ocean in Surfside, Florida, is sliced open for all to see: the couch in her living room, her kitchen, even the suitcases from the trip to Las Vegas she had just returned from are there where she left them at 1:30am last Thursday.

“But what’s not there is her bed. Her bedroom was blown into a pile of rubble,” says Debra Golan, her friend of more than four decades. “And you can still see her suitcase, with the luggage tag still on it. I think those are the moments that it hits me.”

The 54-year-old Hedaya is one of 149 people who are still missing after a 13-story condo tower collapsed in the early hours of June 24 in the small community of Surfside, just north of Miami Beach. The death toll has slowly risen to 12 as bodies have been recovered from the site, but no one has been pulled out alive from the debris since the day of the sudden collapse. “You’re praying, but you’re also looking at the clock at the same time going…” Golan told TIME, trailing off.

The same internal battle could be seen on the faces of families and friends of the missing gathered near the Champlain Towers condos on Tuesday, as search and rescue operations stretched into a sixth day. Relatives transitioned from praying on the beach to providing authorities with DNA samples to identify remains. From the outside, what Miami-Dade fire officials described as a “frantic effort” appeared to move at an excruciatingly slow pace. Bucket by bucket, rescue workers balancing on the shaky rubble combed through piles of jagged concrete and twisted steel that held the contents of what had once been at least 55 apartments. Above them, cranes delicately lifted slabs of concrete off the mount of debris.

So far, officials have stopped short of describing it as a recovery operation. There could still be pockets of air, still the chance that someone could have survived for days in the rubble. Rescue workers used radar and sonar devices and video equipment to detect any possible signs of life, Miami-Dade County Assistant Fire Chief Ray Jadallah told reporters on Monday. “It’s not sounds of, you know, people talking or yelling out,” he said. “It could be a tap, could be a scratch, it may be nothing more than some of the metal that’s contorting.” More than two dozen dogs trained to pick up the breath and scent of live bodies have been rotating in and out of the site. But three cadaver-sniffing dogs have also been brought in. All factors have to be taken into account “before we make a decision to move to the next phase,” Jadallah said.

The stories read and shared by a stunned city have reflected the surreal quality of the unfolding tragedy. A family who received 16 calls from the landline of their grandparents’ apartment in the days after the collapse, only to hear static on the other end. A woman’s frantic phone call to her husband in Washington, D.C. telling him that she had just seen the pool deck collapse from her window, before he heard a scream and the line went dead. Firefighters who used a cherry-picker truck to lift up food and water to a cat named Coco, perched on the balcony of a destroyed apartment.

The more than 200 emergency personnel working at the site have been aided by search-and-rescue teams from Mexico and Israel with experience in saving people from urban collapsed buildings. But the massive effort—the largest deployment of such resources not due to a hurricane in Florida’s history—has been hampered for days by Miami’s summer thunderstorms and fires burning beneath the rubble, with smoke so thick that officials warned it posed a health risk to the entire area. The collapse pancaked a building of 13 stories down to two, making it dangerous for too many rescue workers to stand on the pile at the same time. On Sunday, family members and loved ones who had been allowed to visit the site watched in horror as a rescue worker fell down 25 feet.

Search and rescue personnel work in the rubble of the 12-story condo tower that crumbled to the ground in Surfside on June 24, 2021.
Joe Raedle—Getty Images

Away from the site of the disaster, where the turquoise water and white sand stand in stark contrast to the half-destroyed building, questions are mounting. Was this a cruel freak accident, or a preventable tragedy? And if so, could others be next? Residents of South Florida’s coastline are used to wading through knee-high water after a storm and living with the looming threat of hurricanes, rising sea levels and erosion. But nothing has looked quite like this. In the moments before the building’s collapse, captured on a soundless, grainy security video, there is no attack, raging fire or hurricane-level wind—just a 13-story building suddenly crumpling to the ground in less than 12 seconds.

“Buildings like this don’t fall down in America,” Surfside Mayor Charles Burkett said in a television interview hours later. This was echoed by Florida Gov. Ron DeSantis at a news conference the next day: “How could a building just collapse like that?”

It may take months, or even years, to fully determine what caused the building’s structure to suddenly give way. City officials, engineers and maintenance workers familiar with the building have given accounts of saltwater bubbling up through the foundation, and residents described a garage that flooded often. Just two days before the collapse, a pool contractor was so alarmed that he documented cracked concrete and corroded, exposed rebar in the garage, according to the Miami Herald. Engineering experts consulted by the newspaper concluded the most likely cause was that a column beneath the pool deck gave way first, leading to the collapse of the deck into the garage and then the building.

The 40-year-old building had been in the midst of preparing for extensive, costly renovations to address the “major structural damage” that had been revealed in a 2018 assessment. Three months before the collapse, the president of the condominium association warned that the damage had gotten “significantly worse,” according to a letter obtained by the Wall Street Journal.

But many survivors who lived in the building said there has been no sense of urgency for the multi-million dollar repairs, which did not seem uncommon for coastline buildings which are regularly in need of updates due to corrosion by saltwater. There were reports of frequent flooding and leaks in the underground parking garage since the 1990s, though that again was not unusual for those living on Miami’s coast.

Levine Cava, the Miami-Dade mayor, has ordered an immediate 30-day audit of all buildings in the county older than 40 years. Several other investigations are also already underway. Researchers and analysts from the National Institute of Standards and Technology (NIST), a federal agency that investigated the collapse of the World Trade Center on 9/11, have been dispatched to the site. The town of Surfside has also hired Washington, D.C.-based Allyn Kilsheimer, one of the country’s leading structural engineers with experience dissecting other disasters, to analyze what happened and study the adjacent buildings as well.

Posters of missing loved ones hang on a fence on a nearby tennis court in Surfside on June 26.
Michele Eve Sandberg—Shutterstock

A few blocks from the closed-off disaster site, the fence of a nearby tennis court that had at first been covered in desperate print-outs of faces of the missing has slowly turned into a memorial wall reflecting the South Florida community that lived there. It’s now draped in roses, lilies and hydrangeas, with photos, signs and prayers in English, Spanish and Hebrew, and flags from victims’ home countries.

At least 36 people among the missing or confirmed dead are from Latin American countries, including Argentina, Colombia, Cuba, Uruguay, Paraguay and Venezuela, according to a tally by the Miami Herald. For some who lived there, the stretch of coast was a dream place to retire. Others came to start families, or were there to visit relatives, vacation, or get their COVID-19 vaccine. The victims include both wealthy globe-trotters and the nannies and staff that worked for them.

As the slow rescue effort dragged on, haggard emergency workers, who have been toiling in 12-hour shifts, stopped by to pause by the memorial wall for a moment, arms crossed. Some first responders have been placing mementos retrieved from the rubble, including dust-covered stuffed animals, at the bottom of the fence. “Thank you first responders – Please don’t give up!” one sign read.

On Monday, the city of Miami Beach announced it had cancelled its Fourth of July fireworks festival out of respect for the victims. The annual event was set to take place less than 15 blocks south, a celebration of everything that had drawn the victims to Surfside: the beach, the vibrant Miami community, and life in the United States.

For now, their families and friends remain stuck for another day, wavering between the need to hope and the practical demands of the encroaching reality. For Golan, that has meant organizing Hedaya’s friends to pray for her safe rescue while also making arrangements for her brother to fly down from New York to provide DNA samples that could be used to identify her remains. “I can’t sleep,” she says. “Maybe a couple of hours, and then your mind wakes you up.” 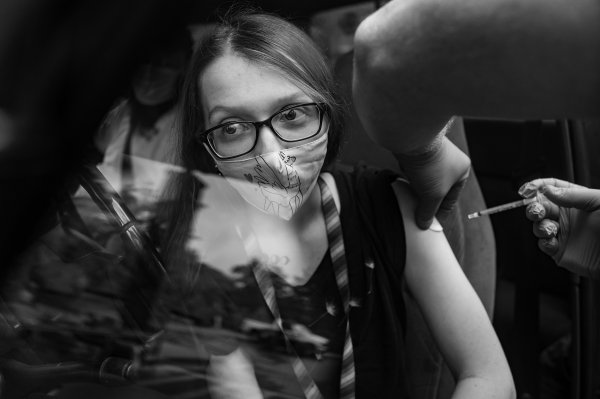 Lessons From a West Virginia County's Vaccine Success
Next Up: Editor's Pick