As if the already worrisome Delta variant, first identified in India, wasn’t concerning enough, now there’s Delta Plus. The latest variant of SARS-CoV-2 was announced by Indian health officials in late June, and labelled by the Indian government as a variant of concern.

By June 24, only about 40 cases of Delta Plus infections were reported by Indian health officials, based on genetic sequencing of the virus from positive patients. But given the original Delta strain’s ability to transmit more efficiently from person to person, and to potentially cause more severe disease, health authorities are rightly raising concern.

Delta Plus contains an additional mutation called K417N, in the part of the spike protein of the virus that binds to cells to start infection. But, says Ravindra Gupta, professor of clinical microbiology at the Cambridge Institute for Therapeutic Immunology and Infectious Diseases who has been genetically sequencing SARS-CoV-2 and studying its genetic evolution, “I predict 417 is not an important enough mutation. Delta is bad enough as it is and I don’t think 417 will change [it] that much or become dominant.”

That’s because the 417 mutation isn’t new. Gupta says he has also found it in other major variants of the virus, including the B.1.1.7, or Alpha, variant, that was first identified in the U.K., and the B.1.351 or Beta variant first reported in South Africa. “We’ve seen it come up in a number of Alpha isolates and it didn’t take off or anything,” he says.

Health officials shouldn’t get distracted by Delta Plus and lose their focus on the original Delta, which is dangerous enough especially when only about 22% of the world has received at least one dose of the most common two-dose vaccines. Dr. Anthony Fauci, director of the National Institute of Allergy and Infectious Diseases, said during a White House briefing on June 22 that the Delta variant is the “greatest threat” in the world’s efforts to contain COVID-19. However, he noted that health officials already have the most powerful weapon to fight this variant: vaccines.

Gupta’s lab has studied how well antibodies generated after natural infection or immunity provided by vaccines can protect against the Delta variant, and found that the protection is sufficient. However, it is lower than that generated against the Alpha variant. So it may only be a matter of time before vaccinated people need a booster shot with a new vaccine to enjoy long-term protection against Delta and Delta Plus.

“We should be worried about the accumulation of mutations,” says Priyamvada Acharya, director of the division of structural biology at the Duke Human Vaccine Institute. “We should be worried about variants that are coming up that are more transmissible and resistant [to immune antibodies]. Should we be panicked yet? I don’t think so. But it’s important to get people vaccinated as fast as possible.”

Given time, new variants of the virus could find ways of evading that protection, if the steady march of mutations that SARS-CoV-2 has developed so far is an indication. “Right now we are seeing evolution in real time,” says Sophie Gobeil, fellow in the division of structural biology in Acharya’s lab. “The virus is trying really hard to evade those vaccines.”

That means staying ahead of the virus could require more, and different vaccines. “I would say we will need boosters for sure and I would even venture to say that the boosters won’t be the same [vaccines] we are getting now,” says Acharya. “From what we are seeing, the virus will likely evade vaccines at some point and we will need updated vaccines.” 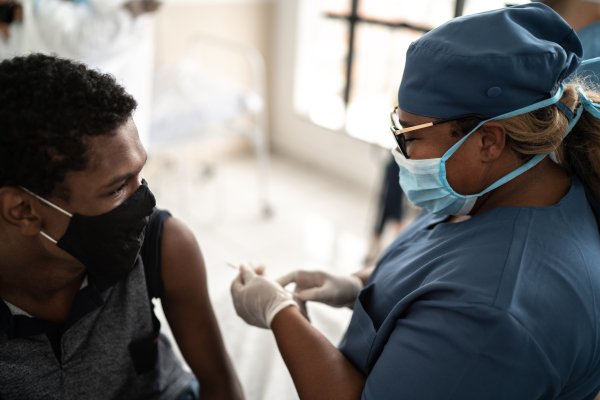 What to Know About COVID-19 Vaccines and Heart Conditions in Younger People
Next Up: Editor's Pick