'We Have a Deal.' Joe Biden Gets His Bipartisan Moment on Infrastructure

President Joe Biden has long said he wants to show Americans that Washington can work to solve problems. In coming to a tentative agreement with a bipartisan group of senators to fund approximately $1.2 trillion in infrastructure spending, Biden took a step toward that goal.

A group of five Republican and five Democratic Senators met with Biden at the White House on Thursday and shook hands on an infrastructure package that, while half of the size of Biden’s initial American Jobs Plan proposal, would still represent the biggest investment in the country’s bridges in half a century, a historic investment in electric vehicles, and a significant expansion of Internet access for millions of Americans.

“We have a deal,” Biden told reporters in front of the West Wing moments after concluding the talks.

It was a victorious moment for Biden, who has prided himself on his Senate dealmaking skills and had to fight criticism that his nostalgia for past negotiations is naive in the current political climate. This agreement signifies “breaking the ice that too often has frozen us in place, preventing us from solving the true problems of the American people,” Biden said. He sees working together with Republicans as part of a larger effort to defang partisan rancor and get Washington on course to solve problems the country faces. “There’s nothing our nation can’t do when we decide to do it together to do it as one nation,” Biden said. “It also signals to ourselves that American democracy can deliver.”

While Thursday’s deal marked a rare moment of bipartisanship—and perhaps provides evidence that Washington can work the way Biden believes it can—significant challenges remain. There are difficulties ahead not just in shepherding this framework into a bill for Biden to sign, but in implementing the rest of the $4 trillion economic agenda he laid out in the spring. The infrastructure plan does not include the $400 billion Biden had originally proposed to expand home and community based care, nor the 7% increase in the corporate tax rate. “This group did not want to go along with any of my family plan issues, the family care, tax credits, the human infrastructure that I talk about,” Biden said. These omissions will anger the progressive wing of his party and could potentially sink the deal, even though Biden made clear that he won’t sign a bipartisan package unless a separate proposal to increase funding for child care, paid leave, and other measures also comes to his desk.

The White House has been touting how Biden’s agenda is now moving on dual tracks: the bipartisan deal largely focused on “hard infrastructure” like the country’s roads and bridges, and a second package focused on “human infrastructure” like childcare and paid leave. The latter package could be passed on partisan lines under a budget procedure known as reconciliation that only requires a simple majority vote. “I’m not just signing a bipartisan bill and forgetting about the rest I proposed,” Biden said.

The negotiations on the second package may end up being more challenging than the ones the White House and the bipartisan group of Senators just spent weeks hashing out. With the slimmest majorities in the House and Senate, the White House and congressional leadership need nearly every single Democratic vote to get both of these bills to Biden’s desk. Already, House Speaker Nancy Pelosi said the lower chamber would not vote on the bipartisan infrastructure bill until the Senate passes a reconciliation package to include the human infrastructure elements. But passing a reconciliation package that can appease moderates in the party like West Virginia Senator Joe Manchin and progressives like Senators Bernie Sanders of Vermont and Elizabeth Warren of Massachusetts is no small feat.

Biden remained upbeat at the prospect that all of these priorities will ultimately pass through Congress and arrive at his desk. “My party’s divided, but my party’s also rational,” he said. “If they can’t get every single thing they want, but all they have in the bill before them is good, are they gonna vote no? I don’t think so.”

But the Senate is about to head out of town for two weeks, a long stretch of time in politics, leaving open the possibility that the agreement could be whittled away by punishing news cycles. For now, Biden and the Senators are moving forward on trust that each will stick to their end of the bargain. Biden evoked a quaint way of doing business that he recalls from his decades in the Senate, but has rarely been seen in recent years in Washington. He and a number of the Senators he met with on Thursday “go back a long way,” Biden said. “We’re used to doing one thing: give each other our word and that’s the end. Nobody questions it. They have my word. I’ll stick with what they proposed. And they’ve given me their word as well. So, where I come from, that’s good enough for me,” Biden said.

Those relationships have enabled Biden to inch forward on infrastructure while his predecessor repeatedly failed. Former President Donald Trump spent the first two years of his presidency trying to line up a $2 trillion infrastructure proposal. But Trump often blew up his own negotiated deals over Twitter when the details of a negotiation created blowback from the right. Trump derailed his own staff’s choreographed infrastructure rollout in June 2017 by denying that he colluded with Russia to win the 2016 election and picking a public fight with former FBI director James Comey. Any pretense of pursuing infrastructure deals was totally quashed by Trump in May 2019, when he said he would refuse to discuss infrastructure proposals as long as he was under investigation by the Democratic-controlled House for his connections to Russia.

With Biden in the Oval Office, some Republicans are willing to set aside the political bloodsport to see if they can bring home solutions to aging bridges and roads and a lack of access to fast Internet. “We didn’t get everything we wanted, but we did come up with a compromise that’s going to help the American people,” Ohio Senator Rob Portman, a Republican, told reporters at the White House after meeting with Biden.

Whether that money makes it out the door will depend on whether this deal can stick. 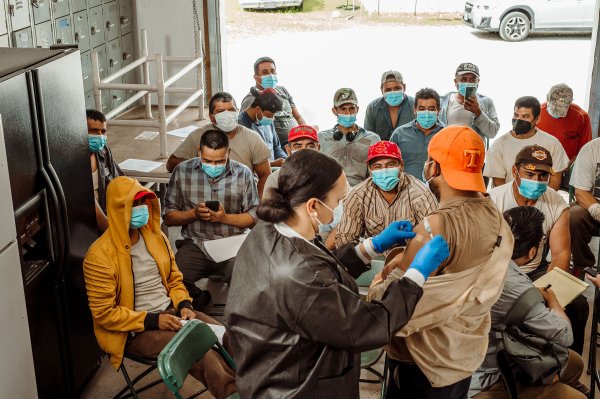 Inside Biden's Effort to Get America Vaccinated
Next Up: Editor's Pick