#FreeBritney Activists Were Dismissed for Years. The Star's Explosive Testimony Changed Everything

For leaders of the #FreeBritney movement, advocating for Britney Spears’ independence has just become more urgent than ever.

As fans and supporters rallied outside the Stanley Mosk Courthouse in Los Angeles on Wednesday, Spears delivered an explosive 23-minute testimony against the conservatorship that’s controlled her life for 13 years. Speaking from a remote location, she publicly stated for the first time that the court-enforced arrangement is “abusive” and pled with Superior Court Judge Brenda Penny to terminate it immediately.

“It was like our worst fears being confirmed,” says Junior Olivas, a leader of the #FreeBritney movement. “We knew some dark stuff was going on behind the scenes, but to actually hear it from her own mouth and hear the pain in her voice was honestly heartbreaking. I was going through all the emotions. I was sad. I was angry. I was happy that she was actually speaking her truth. It was a whirlwind.”

It has been a long and often arduous battle to convince the world that Spears is suffering under the conservatorship—a legal guardianship typically reserved for individuals with severe mental disabilities or elderly people who can no longer make their own decisions. Spears herself emphatically condemning the arrangement seemed to signal a turning point to proponents of #FreeBritney, who have advocated for her freedom through organizing protests, spreading awareness on social media and working with conservatorship reform groups.

Read More: How Britney Spears’ Case Could Change the Future of Conservatorship

Validation after years of dismissal

“Now, no one can deny us. No one can say that we’re conspiracy theorists or that we’re wrong,” says Megan Radford, co-manager of Free Britney LA’s social media accounts. “Team conservatorship or team con, as we call them, has no leg to stand on because Britney just blew everything up.”

At the hearing, Spears compared her existence to that of a sex trafficking victim and excoriated her father, Jamie Spears, who, having served as conservator of both her person and estate, has been at the center of the conservatorship since it was put in place in 2008. “My dad and anyone involved in this conservatorship and my management, who played a key role in punishing me… should be in jail,” she said.

Spears also detailed how she’s been drugged, forced to work against her will, and prevented from choosing her own legal representation, marrying her longtime boyfriend, Sam Asghari, and removing an IUD that’s kept her from having another baby.

The June 23 hearing came on the heels of a series of developments that had put Spears’ situation back in the spotlight, beginning with her January 2019 announcement that she was undertaking an “indefinite work hiatus.” Around four months later, a fan podcast called Britney’s Gram aired audio of a voicemail from an alleged former paralegal for an attorney who worked with Spears’ conservatorship claiming, among other things, that the singer’s March 2019 stay at a mental health facility was involuntary. This prompted an April 2019 public demonstration in Los Angeles where #FreeBritney activists demanded her release from the treatment facility.

“There were several red flags at the end of 2018 and in early 2019 that made me feel like something was definitely wrong with the conservatorship,” Radford says. “And as soon as I heard the voicemail on Britney’s Gram, everything clicked. I was like, I have to start advocating, I have to figure out how I can use my voice to help affect change for Britney.”

Read More: At Last, Britney Spears Gets a Voice in Her Future—and We Have Her Fans to Thank

‘Far worse than any of us imagined’

As Spears’ efforts to remove her father as conservator ramped up over the past two years, the #FreeBritney movement continued to gain steam. Things came to somewhat of a head with the Feb. 5 release of Framing Britney Spears, a New York Times documentary that brought a surge of newfound support for #FreeBritney.

Then, the day before Spears was due to speak in open court for the first time, a bombshell New York Times story citing confidential court records from as far back as 2014 revealed that she had been pushing to end her conservatorship for years.

But Kevin Wu, another #FreeBritney organizer, says nothing could have prepared him for the devastating scope of Britney’s testimony. “I was gobsmacked,” he says. “I was shocked and heartbroken by what we heard Britney say. The things that she claimed were far worse than I think any of us imagined. We suspected a lot of things, but the reality was far worse.”

With Spears herself stating that there are “1,000 conservatorships that are abusive as well,” Olivas says that he hopes Spears’ case can help shed light on the potential for abuse in America’s conservatorship and guardianship system.

“This is so much bigger than just Britney. Coming into this a few years ago, I wasn’t exactly sure what a conservatorship was. So I did my research and I was like, ‘Oh my god, how is she in this?’ I had watched her perform on stage and work her butt off for hours, but yet they were saying that she was incapacitated and couldn’t do simple things like provide food, clothing and shelter for herself,” he says. “Conservatorship laws are so open to abuse. So I hope there’s reform and I hope that Britney’s case can help others who don’t have a voice or the power that she has.”

A continued focus on their shared mission

After years of being dismissed as obsessed fans and conspiracy theorists, Radford says that it’s “incredibly validating” to see the media and general public finally taking the #FreeBritney movement seriously.

“We have been screaming at the top of our lungs and it wasn’t until Framing Britney Spears came out that people really started to pay attention,” she says. “After that there was definitely more interest than there ever had been. But people still weren’t really understanding the depths of it. We in the movement felt incredibly validated by the New York Times piece that published on Tuesday because those unsealed court documents proved that she had been fighting the whole time and that she was being silenced. But we had no idea that on Wednesday, Britney herself would blow the lid off the case and say every single thing that ever needed to be said.”

But while this fresh wave of support is gratifying, at the same time, Wu says he’s largely focused on the fact that, legally, nothing has changed for Britney. As her conservatorship currently stands, Spears’ personal care manager, Jodi Montgomery, is set to continue as temporary conservator of her person until Sept. 3 while Jamie and corporate fiduciary Bessemer Trust serve as co-conservators of her estate.

“Wednesday was monumental. It was definitely a watershed moment,” Wu says. “But no changes were made to the conservatorship after Britney spoke. No decisions were made. She’s still not free. She’s still under conservatorship. So we have to keep the pressure on and we’re going to keep fighting until there is change.”

Staying the course is more important than ever now that Spears has spoken out, adds Radford. “I’m incredibly proud of Britney for putting it all out there. But then she had to hang up the call and go right back to her abusers. So I hope she’s OK and I hope the world is watching.” 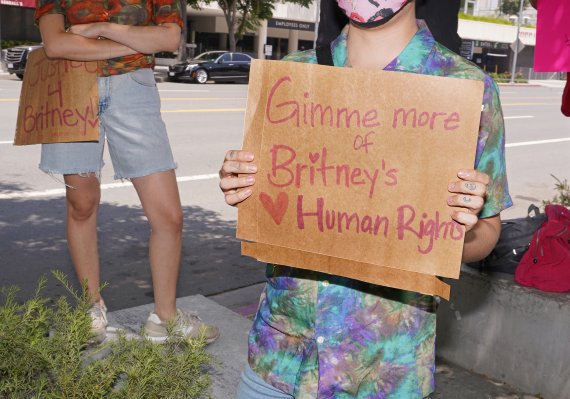 Britney Spears Gets a Voice in Her Future
Next Up: Editor's Pick