It's More Than Just Rain and Snow. Climate Change Will Hit Air Travel in Surprising Ways

For those watching U.S. air travel spike as the COVID-19 pandemic fades, American Airlines’ recent announcement that it would trim its flight schedule may have come as a bit of a surprise. More and more people have been flying in recent months, and in response airlines have added flights to meet that demand, not taken them away.

American cited several operational reasons for the adjustment, including labor shortages at vendors that resulted from quickly ramping up from pandemic level staffing levels, but unsurprisingly the one I want to focus on here is “unprecedented weather.” In an email, an American spokesperson told me recent bad weather at the airline’s hubs in Miami, Chicago and Detroit had disrupted operations. The company is also monitoring extreme heat in Phoenix and thunderstorms in Dallas and Charlotte, the spokesperson said.

I won’t make the case that this recent spat of bad weather is caused by climate change, but the cancellations across American’s schedule provide a good opportunity to look at how the effects of climate change might make air travel more challenging—both in terms of industry economics and the travel experience—in the coming decades.

Much attention has been paid to airline emissions, but surprisingly the need for the industry to adapt their operations to the challenges of extreme weather has received relatively little consideration. Still, there’s much to think about. A 2016 article in the journal Carbon & Climate Law Review offers a high-level overview: increased precipitation will lead to more frequent delays, extreme heat will damage runways and storm surge could damage infrastructure at a quarter of U.S. airports even under a moderate sea-level rise scenario. And that’s really just a snapshot. The article concludes that “every sector of the air transport industry will be affected.”

Any one of those factors could make for a story on its own. But I want to home in on one area that’s probably less obvious: extreme heat. Flying is one of those experiences where you hardly think about the temperature outside. You sit in an air-conditioned airport, board an often-freezing plane and exit into another air-conditioned terminal. It can be 100°F outside at your origin and 110°F at your destination without you ever taking off your sweater.

Behind the scenes, however, your airline is watching that temperature closely. Warm weather makes the air less dense, requiring planes to move faster to get off the ground. On extremely hot days, airlines often restrict a flight’s weight by cutting the number of passengers or restricting the plane’s cargo load. On rare occasions, extreme heat can lead airlines to cancel flights altogether. In the summer of 2017, American Airlines made news for canceling flights in and out of Phoenix because temperatures were too high for some planes to operate at all.

Even if planes are operating, extreme heat creates problems on the ground, too. In May, American Airlines started operating a cart on the tarmac in Phoenix to deliver water, Gatorade and popsicles to help keep employees from overheating, according to a report from FOX10 Phoenix. In many parts of the globe, particularly in parts of the Middle East, outdoor air temperatures are already approaching a level where staying outside for long periods of time can be unsafe.

Right now, heat-related problems happen rarely enough that even a frequent flier may not notice—but as temperatures rise that will almost certainly change. A 2017 study in the journal Climatic Change found that up to 30% of flights departing at the hottest part of the day may face weight restrictions in the coming decades. It seems safe to bet that we’ll see many more cancellations, too.

Climate change-related disruptions to flight schedules are the ultimate example of a “first-world problem,” and this obviously isn’t the most pressing climate concern. But I think it’s a useful example of how climate change will seep into areas we may not expect at a glance and, without a proactive attempt to address it, make life just a little worse. 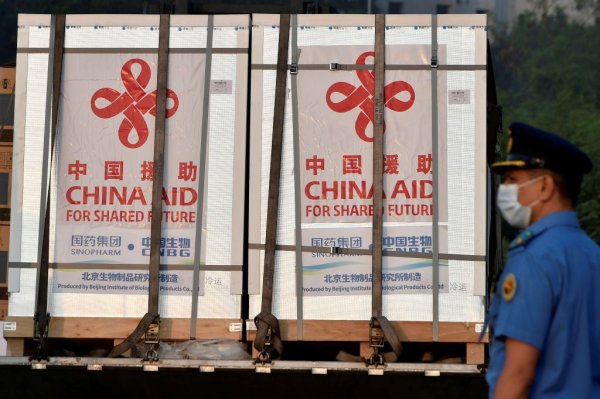 How COVID-19 Vaccination Became a Climate Metaphor
Next Up: Editor's Pick